Northeast neighbors are concerned about a change to city code, allowing for an extended stay hotel near their homes 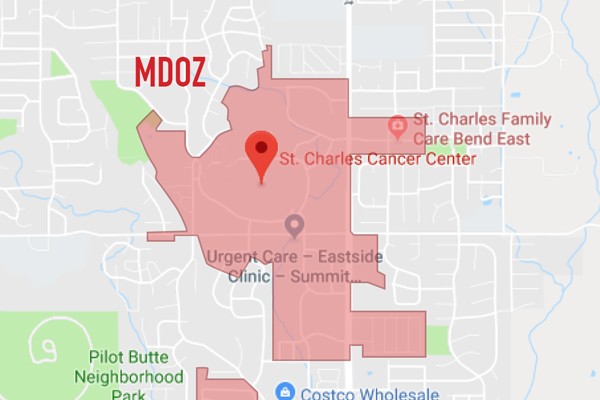 A code change voted on by the Bend City Council has people in one northeast neighborhood challenging a new project. In December, the council voted to allow a new type of structure in the Medical District Overlay Zone, a 280-acre area around St. Charles Medical Center. The proposal, made by a Portland area developer, will allow extended-stay hotels in the zone. Hallmark Inns submitted the proposal to change the MDOZ, and a number of neighbors are ready to fight the project.

The property, located on 2 acres on Conners Avenue, is zoned High Density Residential, which allows for only multifamily residential units. The proposed MDOZ would allow medical facilities to also be built on the land. Changing the rules in that overlay zone to allow for the extended stay hotels means project developers do not have to change city zoning—a much more complex process.

The Bend Planning Commission reviewed the proposal and voted 4-0 to recommend it to the Bend City Council.

"There was no zone change. Each individual property has their comprehensive plan and zoning designations and then there is an overlay over the top of that for medical use," said Councilor Justin Livingston. "What changed was the use table in the medical overlay zone. It's very explicit about what is allowed, so what it didn't allow was extended stay hotels."

There are a few hotels around 1 mile from the hospital, but none are considered extended stay hotels. The planning department considers the nearest extended stay hotel to be My Place Hotels, near the Old Mill. Hallmark Inns' permit for the actual property has not yet been submitted, which means no signage is yet required. City officials said they met their obligations by posting the notice in a newspaper as well as sending a letter to the Mountain View Neighborhood Association—but that was only for the code change, not for the hotel itself. Neighbor Jim Connors, one of many fighting the project, explained, "When something like this happens there [should] be signage out here saying, 'This property is subject to development. Here's what's planned. Here is when the hearings are. Here is how to make your public comments.'"

Connors said that is not their issue with the project. "We always thought that this would be developed, but it was in the medical district overlay zone, we figured it would be more doctor's offices."

"The amendment happened without specific reference to this lot to allow the hotel, an extended stay hotel," he added, "and this neighborhood is going to pay the price for it."


"You can't create equity for some person at the expense of another person's equity. That is the city picking winners and losers and we don't think that is a good idea." —Jim Connors tweet this

The HOA is objecting on five different issues: livability, equity, accessibility, privacy and safety. They're worried about property values, the profile of the people who will be staying in the hotel and increased traffic. Conners Avenue is just off 27th Street, with no light leading into the neighborhood. Neighbors are also concerned that there's been no plan to make up for the increased traffic a hotel is expected to bring. The 24/7 nature of a hotel is also a main concern.

"The noise doesn't stop at the back fence when it makes noise," Connors said. The neighborhood already includes PacificSource, Bend Dermatology, Whispering Winds Retirement and a daycare, but the residents are OK with those businesses. Connors explained, "They are good neighbors, they go home at 5:30."

The City Council approved the Hallmark Inns proposal unanimously Dec. 20. Livingston said he voted because he felt it was reasonable for people with loved ones or outpatient care at the hospital to have a place to stay.

"People come to Bend for medical care. Whether they're from Burns or Lakeview or wherever. The eastern side of the state comes to Bend for major medical care," he said. "That is where I thought that the extended stay was completely appropriate for a medical overlay zone."

According to Hallmark Inns' proposal, the purpose of the hotel will be for those using the hospital, but the proposal did not include any assurances that those staying at the hotels would have any association to the hospital. When the permit for the hotel is filed with the city, the City Council will not necessarily be required to hear it. According to Livingston, for Type 2 permits, the staff at Planning Services can approve the request. However, "If it becomes something that is potentially contentious they might actually have a hearings officer hear it and judge on it. And then you can actually appeal that decision to the state Land Use Board of Appeals."

Connors said they're waiting for the permit to be filed so they can see if there is anything to object to. Many homeowners remain worried about their property values.

"People choose where they live based on those things, and that choice is being taken away here," Connors said. "You can't create equity for some person at the expense of another person's equity. That is the city picking winners and losers and we don't think that is a good idea."