How Does Your Water Taste? | Natural World | Bend | The Source Weekly - Bend, Oregon

How Does Your Water Taste?

Memories of the waste dump that is Alkali Lake

Back in the '70s I was hired to help fulfill one of the great ideas that went with what Sunriver is today. Sunriver is what it is because landscape architect Bob Royston, out of San Francisco, planned it that way and John Gray made it happen. 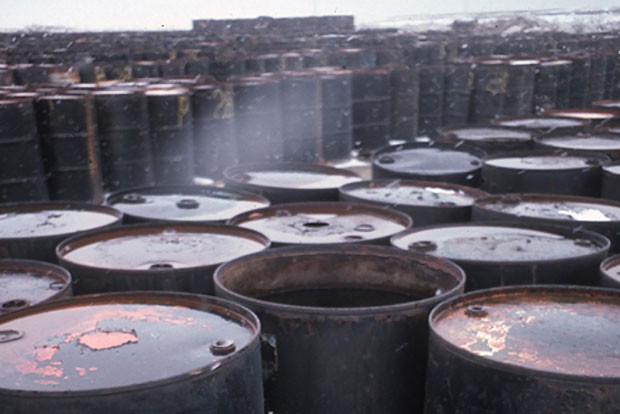 One evening when I got home, the phone rang.

"This is an anonymous call..." a voice announced, who I recognized immediately as that of an Oregon State Police officer I'd worked with saving an eagle stuck by a car on Hwy. 20.

"OK," he said, "this is still an anonymous call..." And then he went on. "I just got home from Alkali Lake where I followed a trucker I cited for a leaking load. He had a bunch of leaking 50-gallon drums on his truck and was pretty close-mouthed about what he was hauling.

"I didn't want to make the driver nervous and allow any more of whatever was leaking to louse up the works, so I followed him. He turned south at Riley and then turned west near the state's Alkali landing strip and drove out to the old lakebed."

I knew this was going to be important, so I asked him to hold up while I grabbed paper and a pencil. When I gave him the go-ahead he went on. "Well, I stayed out of his range of sight and watched as he pulled up to a huge stack of drums, similar to what he was hauling. He got his lift-truck off the back and started stacking the drums against and among the others. When he drove away I went to look at the drums."

He hesitated for a moment, and then with a sigh, went on: "Jim, there's acres and acres of drums out on that old lake bed, a lot of 'em spilling their contents all over the surface and it stinks really bad, it looks and smells like some kind of chemical goop."

Apparently, the chemical outfits got off scot-free, as the State of Oregon had approved of that stinky, poisonous debacle. tweet this

And it was! I went out and looked at the stuff myself the next day. It was apparently something created by chemical companies (in Portland?) when they ran one product into a new product. They had to get it out of the lines, so they put it into drums and first dumped the drums in a landfill west of Portland.

But the county district attorney out there fined the chemical outfits because the drums ruptured and contaminated a creek running nearby, which was a rancher's water supply.

So this time, the chemical companies got organized. Somehow, they convinced the Oregon Department of Agriculture to approve this dump. A trucking outfit contracted to haul the stuff out to Lake County to dump it on the old ice-age alkali lake bed where it would be out of sight/out of mind.

The photo here is what it looked like in 1973. My wife, Sue, and I had a glider flying school at that time in Bend, and to make things work out financially I was "stringing" for KGW-TV—filming stories, writing scripts and sending the works to Portland on the Trailways Bus. I sent them a story on that horrifying site.

Consequently, the Oregon Department of Environmental Quality got wind of it. Apparently, the chemical outfits got off scot-free, as the State of Oregon had approved of that stinky, poisonous debacle. Taxpayers paid DEQ to bury it—BUT all that stinky, chemical poison is still out there under Alkali Lake.

The Alkali Lake debacle gives me the shudders every time I drive by it. Alkali Lake is a huge settling pond left over from the last ice age, and as such, water from today's rains and snow run into the lake, mixing with all those chemical drums and the "who-knows-what" contents.

The so-called "lake" is there because some 20,000 years ago, great ice sheets buried much of Asia, Europe and North America. Then the Earth warmed up and within a few hundred years sea levels in some places had risen by as much as 30 feet—the way the ice sheet that covers Greenland is melting today.

This should be the end of the telling of this stinky tale, but unfortunately, it isn't. Someday someone is going to find that chemical stuff from Alkali Lake in their well, and then. ...