How Much Exercise is Too Much? | The Source Weekly - Bend, Oregon

How Much Exercise is Too Much?

With sports such as mountain biking, local experts say less is better for your dog

Those who spend any time on Central Oregon's many trails might have seen them: A human and dog combo, tearing through the woods—human on mountain bike, wearing a big smile; dog on four paws, tongue lolling out of its mouth. With the ability to be off a leash and rushing through the forest, it's natural to think the dog may be having the time of its life. And it very well may be—but how much is too much of a good thing?

Seeing a dog running behind (or ahead) of its bike-riding human on a trail is a fairly common occurrence, both in pet-friendly Oregon as well as other locales. But according to Kristin Wolter, a veterinary tech certified in canine physical rehabilitation and canine fitness, there can definitely be too much of a good thing.

"We have seen many patients that were avid mountain bikers," said Wolter, who works at Stride Canine Rehabilitation & Fitness Center in southeast Bend. At the clinic, Wolter, along with Stride's veterinarian, see plenty of injuries related to overuse and/or overactivity. A lot of younger dogs get injuries to the joints and ligaments as a result of "repetitive retrieving," Wolter said, which might involve playing chuck-it or Frisbee over and over. In addition, the clinic also sees patients whose athletic lifestyles lead to pain.

By the time the dogs make it to Stride Canine Rehab, they've already been diagnosed by their own vets with strains, joint degeneration or other issues. Stride helps injured dogs treat pain as well as increase strength, mobility and function.

With dogs who run as their humans bike, in particular, Wolter said it "can be pretty hard on them in the long run.

"I think dogs in general are designed to run at short distances at speed and cover a lot of ground at a moderate pace," she said. "Mountain biking or exercise that is at speed for a long duration—that's not something necessary for dogs to be healthy or fit."

Some humans believe their dogs need intense bouts of exercise to help them calm down or relieve anxiety, Wolter said—but that can actually be harmful.

"I certainly think it's appropriate for dogs to run, and run full-out, but it needs to be in moderation—not every day, and in fact, there are many studies that show it can increase stress in dogs from all of that running and chasing, and can really impact their mental state," Wolter said, adding that it can sometimes create more behavioral problems than it fixes.

While taking a dog biking long distances has the element of speed attached to it for dogs, running or jogging with your dog doesn't pose the same risk, Wolter said. It's generally done at slower speeds, for one. 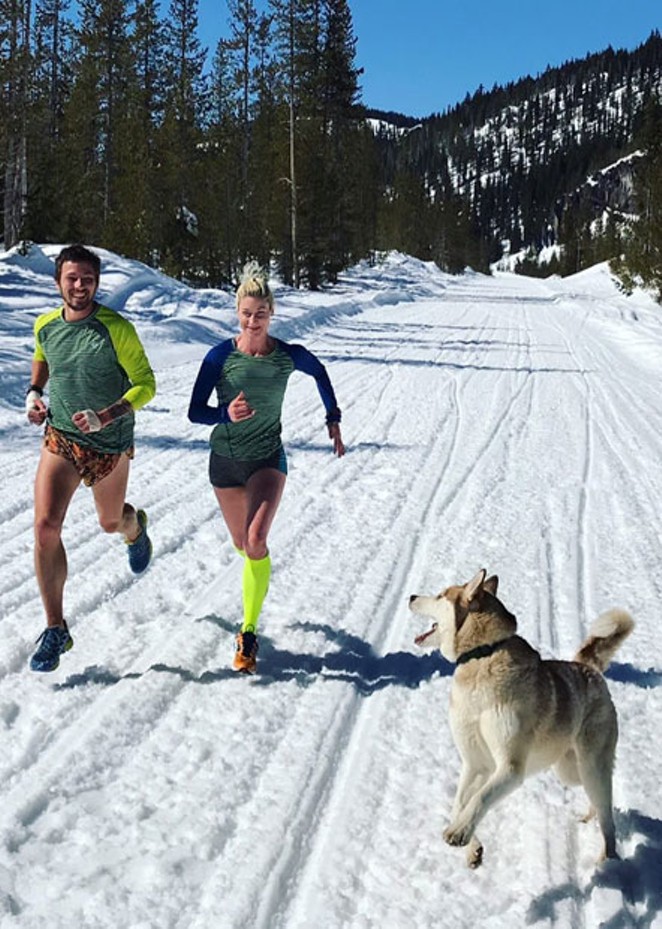 Bendite Renee Metivier, a marathon runner who just competed in the U.S. Olympic Trials, has a Siberian Husky, Raider, along for many runs—but that comes with a lot of caution. Metivier's partner, Chris Patterson—also a distance runner—trained Raider from a pup, but says he didn't start any runs with her until she was 9 months old. At the start, Patterson said, Raider didn't enjoy running long distances. Little by little, she began to enjoy longer runs.

"I just made sure to keep it fun for her," Patterson said. "I run because I enjoy it. The goal was to have it be something she enjoyed. The minute she seemed not into it, I was out. And I let her dictate the pace."

"She was stalled at about 5 miles for a long time, for the first few years I had her," Patterson said. "We kept it at that, but at about age 4, suddenly we were doing 8, 15-mile runs. Now her longest is 23 in the winter."

Patterson and Metivier emphasized the value of watching their dog's cues. Just like humans, dogs don't always have the same level of energy on certain days, they said, and they're careful not to take Raider on long runs every day. In the summer, Raider's thick coat means she needs more water, more breaks, and more swim time instead of so much running. Rest days are also key.

"I ran her a little less during my Olympic Trials buildup, because I didn't want to put my own personal agenda into her training," Metivier said. "That's where people go wrong—they put their own needs on the dog and bring them along when it's not good for them."

As the owner and founder of Recharge Health + Performance Center, who specializes in biomechanics and performance training, Metivier also knows the value of recovery tools such as massage.

"I check out her paws, I give her little massages at night... just like I get massages!" Metivier said.

Exercise is an important component of a dog's healthy lifestyle—but always keeping moderation and the dog's needs in mind is vital. Raider the Husky may tromp 23 miles through the woods with her humans—but that came with a long tapering-up period... and ends with plenty of rest.

Wolter, the canine rehab vet tech, also cautions people to avoid running puppies. In general, puppies should be at least 12 months old before doing any repetitive running, as earlier running can lead to degenerative joint disease.

In general, a few long walks during the day, followed by off-leash hikes a couple days a week is just about right for most dogs, she said.