How to Train Your Dog

A Q&A With Jack Walker, local breeder and trainer

With parks, trails and pubs where our four-legged friends are welcomed with open arms, there's no doubt Central Oregon is a pet-friendly community. Most people get dogs with the best of intentions, but not everyone knows how to train them. Here, a local breeder and trainer offers some tips. 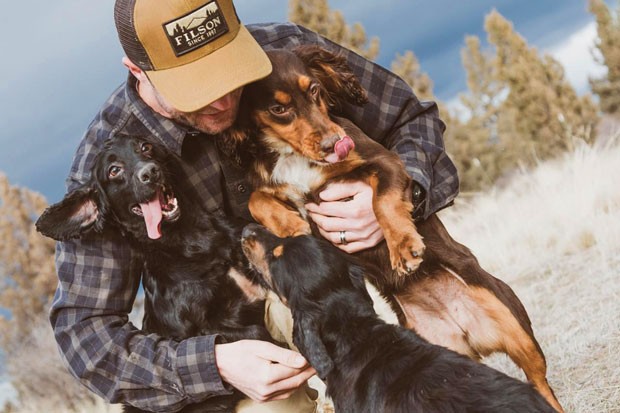 Source Weekly: What age should a puppy go to its forever home?

Jack Walker: Typically it's six to eight weeks. By seven weeks of age the puppy's been on solid food and weaned off mom for about a couple of weeks so they're independent of mom. The socialization and the establishment of the pecking order, and just being around other dogs is critical to their development.

SW: When can you start training your puppy?

JW: Day one. From the moment you get that puppy home, you're starting socialization. Socialization is so critical to the development of a dog. And the socialization period is a brief window in time and it runs roughly between seven to 14 weeks of life, and in that period, you're exposing the dog to every stimuli that they're going to encounter during their life. The only caveat is you don't want to take your dog to places that are highly frequented by other dogs until your dog is fully vaccinated.

SW: When can you start formal training?

JW: I start somewhere around 10 to 12 weeks. Keep it simple, keep it fun, keep it balanced. Less is way better than more. What I mean by that is it's way better to do a bunch of short sessions versus going out and doing a long marathon session where you're trying to accomplish half a dozen different things, you're just going to confuse the dog. As far as commands go, less is better. In the training sessions, if they're happy and they're ready for more and their tail's wagging, that's the time to put them away. If they have a successful recall or a successful sit, put the dog away and end on a high note.

JW: I let them drag it around so they get used to it. And once they're dragging it around and it's not in their mouth and it's just kinda like, yeah that thing's on, this isn't going to change my day that much, then I'll take them into the yard and I have a tie-out and I'll clip the dog to the tie-out and then I'll walk away. The tension on the neck collar—you need to make sure it's correct so they're not going to slip out of it and it's not too tight it's going to choke them. Then I'll walk away and they'll jerk against that thing and I'll go in the house where I can watch them. And I'll leave them for 5 minutes the first time, 10 minutes the second time, 15 minutes the third time and 20 minutes the fourth time and about then you walk back out and they're just sitting there. They're not tugging on the leash, but it's teaching them to submit to the leash without that being associated with you.

SW: How about crate training?

JW: Start with the crate early as part of the socialization process. Dogs like the crate, they're den animals. The crate is not to be abused, but it's an asset, it's healthy for the dog as it aids in training for obedience, it aids in potty training and you can keep your dog securely when you have to go out and do something that can't involve the dog. Don't be afraid to use the crate.

SW: What food do you recommend?

JW: It starts with a high quality puppy food and your puppy's going to be on that food for approximately the first year of its life. Do online research. Go to Dog Food Advisor, make sure the brand hasn't had a bunch of recalls. There's going to be some trial and error, but once you find something that works, stick with it. As the dog gets older, supplement the dog correctly. It's like humans take vitamins and the vitamins my 6-year-old takes are different from the vitamins that my wife and I take. Be willing to adapt on food. Start with the breeder recommendation first because chances are, whatever the parent dogs are on is ultimately what your dog will succeed on as well.

SW: Why do people fail?

JW: They try too much too soon. Go one step at a time and the time you put into your dog is totally worth the investment. You go by the dog's pace and you go one step at a time. You don't overdo it, you don't move onto the next thing until you've been successful at what you're trying to teach them at that moment. By the time they reach six months of age, you're going to have a really well trained dog. And that investment time at six months is going to pay huge dividends over the next 12 years of the dog's life. It's worth investing the time in your animal, because they're part of your family.