May 30, 2020
5 comments
The death of George Floyd—who died after a now-former Minneapolis police officer kneeled on his neck for nearly 9 minutes—has been a tipping point in the U.S., causing many to rally, and some to lash out violently across the U.S. over the past several days.

In Portland, people broke into the Portland Justice Center and lit fires, among other damage. In Minneapolis, people lit the police station where the four officers involved in detaining Floyd worked. In Bend, the response was significant—but more tame. Hundreds of people gathered near Greenwood and Wall streets Saturday morning, eventually doing an impromptu march from Wall to Bend's busy 3rd Street.

On Friday, Bend Police Chief Jim Porter issued a statement in regards to the death of Floyd, writing, "The unfathomable actions taken by the Minneapolis officers that led to the murder of Mr. George Floyd have not gone unnoticed by our department and our community members. We are living in difficult times, and this horrific situation widens the gap of building trust between communities and law enforcement. We are saddened that such brutal actions were taken by a few that were sworn to protect.

"We want our communities of color to feel safe, to feel included and know their lives matter. We want our actions to demonstrate that," Porter stated.


"As police leaders and on behalf of our law enforcement partners across Oregon, we wish to reassure our resident that we do not condone and will not tolerate this type of conduct. Our police officers take a solemn oath to uphold the Constitution. Our profession is based on the core values of honesty, character, professionalism, respect and accountability. We recognize and value the sanctity of human life and we believe all persons should be treated humanely and with dignity," wrote Redmond Police Department Chief of Police Dave Tarbet and Redmond PD Captain Devin Lewis in a joint statement.

"Public trust and accountability for police agencies and police officers is crucial to a safe, inclusive community. We recognize that even isolated incidents of police misconduct anywhere undermine public trust everywhere. We are dismayed and disgusted when the actions of a few tarnish the reputation of our honorable law enforcement profession and undermine the heroic work our police officers perform in service to our communities."

The Source documented the rally, and is collaborating with its organizers on a larger story for the print edition. 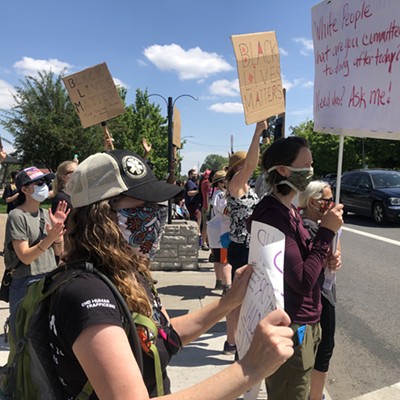