A project that could very well be Bend's biggest affordable housing project to date is now underway. 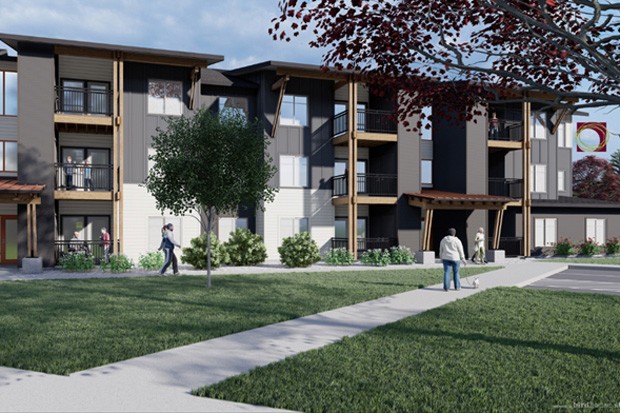 According to a Wishcamper press release, the community will have one-, two- and three-bedroom apartments for working families and people who earn less than 60% of local median family income, or just under $46,000 for a family of four. Plans include an approximately 5,000-square-foot community building with recreational space, a fitness center, kitchen facilities and a community room to host free onsite services for residents and the surrounding community. Outdoor amenities will include a large splash pad, picnic and BBQ areas, community gardens and covered bike storage.

"The project is currently under construction, and we're nearing the point when buildings will begin going vertical," Justin Metcalf, president of Wishcamper Development Partners, told the Source via email. "In the near-term, we'll begin local community outreach to priority populations to ensure they understand the housing opportunity that will be available and solicit feedback on resident services." There are some challenges associated with building during COVID-19, such as shortages in labor and volatile markets for materials, but Metcalf said so far the project is on schedule.

With 240 new units, McConnell noted that Stillwater might be the largest affordable housing project in Bend thus far, and it's coming "in the time where we need it more than ever before," she said. The City Council also set a goal to complete a total of 3,000 residential units during the current biennium.

"So, it's a really big deal," McConnell said. "This property will stay affordable under the Housing and Urban Development definitions for a term of at least 50 years. It's pretty exciting to have that sort of security and length of affordability covenants."

McConnell expects many of Bend's essential workers to move into Stillwater. "They are the folks who answer the call if you call 911 and will show up in the back of an ambulance at your house," she said. "They're our child care workers, and the folks checking out groceries and cleaning hotel rooms."

Just as the Stillwater project feeds into city and county housing goals, it's part of a statewide effort to expand affordable housing. According to Nicole Stingh, interim director of public affairs for Oregon Housing and Community Services, in 2019 the OHCS released the Oregon Statewide Housing Plan, which combines qualitative and quantitative data to establish how Oregon can best tackle its housing crisis. "One of the key goals, of course, is affordable rental housing," Stingh told the Source. Too many Oregonians currently pay half of their income toward rent alone, she said. Statewide, Oregon hopes to triple the existing pipeline of affordable rental housing, up to 25,000 homes.

Meanwhile, the State of Oregon closed the sale of about 382 acres known as Lands Bend Corp., a private developer, for $22 million. Located at 21425 Stevens Rd. (adjacent to 27th Street and Reed Market Road), the property is designated for mixed residential, commercial and industrial uses within the City of Bend Comprehensive Plan. Proceeds from the sale will go to Oregon's Common School Fund, which previously owned the property. The project has been somewhat controversial because the area is a popular hiking destination. However, the Oregon Department of State Lands stated in a press release that it expects the project to bring more than $450 million into the city along with 800 jobs once complete.

“This property will stay affordable under the Housing and Urban Development definitions for a term of at least 50 years. It’s pretty exciting to have that sort of security and length of affordability covenants.”— Lynne McConnell tweet this

McConnell says Lands Bend Corp. has not indicated that there will be any subsidized, or what she calls "capital A affordable housing," on the property, and the City did not require it as a condition of annexation. According to McConnell, that's not unusual.

Under Bend's current Urban Growth Boundary, about 370 acres of the Stevens Road Tract will need to be annexed into the City as part of the project. (Twelve acres already fall within the City boundary and are designated residential.) In Oregon, UGBs are a city's growth plan, indicating where it expects to expand over the next 20 years, and meant to limit excess urban sprawl and preserve farmland and forests.

"To date, the Bend City Council has not required provision of affordable housing as a condition of coming into the UGB or building within the UGB," McConnell told the Source. "We have developers really very interested in building true affordable housing that are waiting for that right property and ensuring that they can line up the subsidy appropriately. And it takes a lot of time. So, sometimes the City has to consider how much is out there as we're making policy to promote affordable housing so that we're setting our expectations in a place that's appropriate for what's actually available." 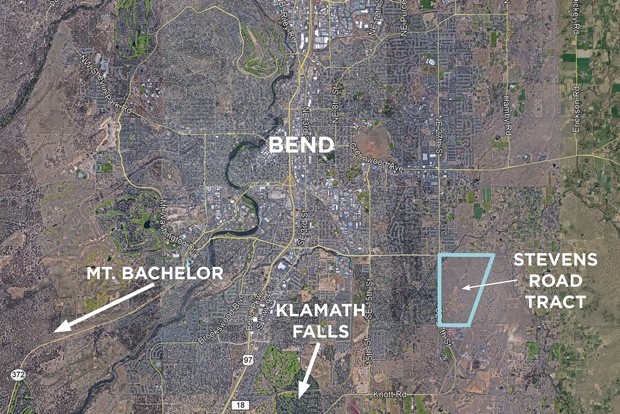 When properties are available, making affordable housing projects feasible remains a challenge. "The lack of subsidy locally, at the state and at the federal level right now is, in my opinion, the largest barrier that we face in affordable housing development in Bend right now," said McConnell.

McConnell says the City Council has seen success with focusing on incentivizing affordable housing rather than requiring it.

"We have received offers from private landowners who wish to build affordable housing, and that was considered as a condition of coming into the UGB through the UGB expansion that was approved in 2016," she said. "So, there are a variety of property owners all around the existing city limit that have offered to put affordable housing in. We are seeing a handful of developments that will have that that are being annexed over time."

Russell Grayson, community development director for the City of Bend, said Lands Bend Corp. has indicated it hopes to get its Master Plan for the project submitted in early 2021, and has shown an interest in "various types of market rate housing" and "incorporating some natural features into their park and open space areas."

Both the City and the Bend Park and Recreation District are involved in conversations with Lands Bend Corp. regarding park, open space and trail requirements, Grayson said via email.

UPDATE 12/18/2020: Readers asked the Source what rent might look like at Stillwater. Apartments at the property must fall under an “income ceiling” based on the size of the household—costing less than about 30% of the household income. Potential residents must earn less than 60% MFI. For a single person, 60% MFI is just over $32,000. For a family of five, it’s just under $50,000.

According to Lynne McConnell, affordable housing manager, at Stillwater, this cost model is implemented by bedroom. Under the model, most people would pay about $805 for a one-bedroom apartment, $862 for a two-bedroom and $1,035 for a three-bedroom. Additional information on Oregon Housing and Community Services’ income and rent limits can be found online. The exact values of rents and earning ceilings can change over time as MFI changes.

Ashley is an amateur cook, trained chemist and aspiring forest hag. Until she can move into a small hut in the woods with her chihuahua, Grendel, she passes her time playing board games and watching movies. She loves all things crafty, from brewing beer to crocheting amigurumi. She joined the Source in 2020.
Read More about Ashley Moreno