A stretch of the Deschutes River between Sunriver and La Pine State Park has long had shooting restrictions in place, closing hunting along the waterway that zig-zags through federal lands and housing communities.

Except for two little spots. 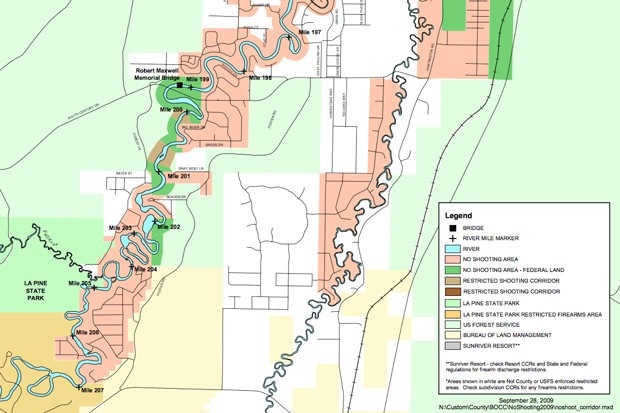 The segments, each less than 1 mile but close to each other on the river just south of South Century Drive, are U.S. Forest Service land and are open to shotgun use during waterfowl season. They're also close enough to homes, roads and trails that people who live nearby say they expect problems worse than the dead birds, abandoned duck blinds, litter and loud shotgun blasts they've long complained about.

At an Aug. 28 meeting, a group of area residents asked the Deschutes County Board of Commissioners to end the hunting allowed in those small portions along the river between Maxwell Bridge and Forest Lane, arguing that it takes place too close to forest trails and homes. Nearby communities have grown significantly, they said. And more people now use the trails and river year-round to kayak, paddle board, canoe, hike, run, bike, ski or snowshoe—many of them unknowingly crossing through hunting zones. The group described run-ins with hunters, saying they have intimidated residents, hit homes when shooting, showered the roof and deck of one home with birdshot, and walked onto private property to retrieve dead birds.

"Truly an accident waiting to happen," said Karyl Gothe, who lives in Oregon Water Wonderland I and noted a public boat launch and campgrounds not far from the two spots.

Bob Dixon, the Bend chapter president of Oregon Hunters Association, said this month that he's not familiar with the area, but knows of it as a duck hunting site and has heard of people calling state police on hunters who are legally hunting.

"Nobody's really brought it to our attention," he said of the residents' call to close hunting there.

Dixon planned to raise the issue with the association's board that would consider whether to take any stance on it.

At the meeting last month, physician John Stassen told commissioners that he was raised in South Dakota and grew up hunting, but was surprised at the amount of gun activity near homes in his Water Wonderland community.

"It's a safety concern for my children," Stassen said.

"I'm always afraid of my dog getting shot," Williams said.

"Sort of a pat-on-the-head attitude," Jones said of responses the group has gotten. "I expect better of our officials and agency representatives."

"Maybe there's a political fix," or an administrative one, Doyle said, but there's no legal fix the county can do. "It's federally owned land that allows hunting."

Commissioner Patti Adair offered to bring the issue up with the office of U.S. Rep. Greg Walden of Oregon.

"I am a hunter," Henderson said. "I understand the conflict myself."

Commissioner Anthony DeBone wondered whether the group had researched the county's authority to set a non-shooting zone on Forest Service land.

"We have tried now for years," Gothe said.

“It’s certainly something that warrants a closer look at the very least.”—Kevin Larkin, Bend-Fort Rock District ranger at Deschutes National Forest tweet this

State law pre-empts local jurisdictions from regulating the discharge of firearms. But not Deschutes County. That's because Deschutes County already had an ordinance in place so it could set no-shoot zones—before the state declared its pre-emption in the 1990s in an effort to avoid a patchwork of rules, Doyle explained this month. At the county's request, the state Legislature then grandfathered in the county's existing ability to create no-shoot zones, according to Doyle. The county still has the ability to create them, but not on federal land or inside incorporated areas.

The residents make a pretty good argument about the growing amount of housing in that area—often a reason for setting a no-shoot zone, he added.

"Even if we 100 percent agree with you, there's not a single thing we can do legally," Doyle said of the group.

The county's process to create a no-shoot zone involves a petition signed by the property owner—in this case, requiring consent from the federal government.

The Forest Service knows about the issue and has checked to see that hunters there behave legally, said Kevin Larkin, Bend-Fort Rock District ranger at Deschutes National Forest. Mostly, they do, he said. But the Forest Service is open to discussion of shooting closures and Larkin noted other such closures along the river.

He also noted that hunting at the site is a legitimate and legal use of Forest Service public lands. And he pointed to the passage this year of the Dingell Act, addressing management of natural resources on federal lands. It emphasizes the importance of hunting and recreational shooting as legal, acceptable uses of public lands, Larkin said, and that sets a different context for the agency's approach to any discussions.

Larkin said he knows of no threshold or objective metric or standard for gauging whether to close an area to shooting.

"It's certainly something that warrants a closer look at the very least," Larkin said of the case. "It is one of many places that we need to give some attention."