"A Quiet Place" will get you 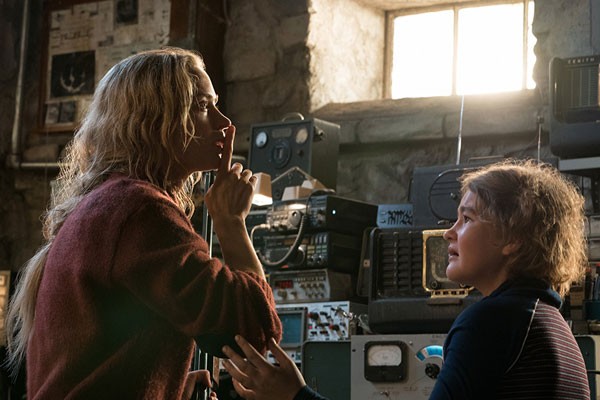 I wasn't really looking forward to seeing "A Quiet Place" in the theater. Don't get me wrong, I was hyped for it, but it seems like for half the movies, the theaters are half-full with people treating the experience like they're in their living rooms... answering a ringing phone, carrying on conversations or loudly reacting to something every two minutes. Many modern moviegoers don't really allow the magic of cinema to really take hold.

I knew going in that "A Quiet Place" was mostly a silent film, with American Sign Language being the primary method of communication. With it, the sound of someone eating popcorn had the potential to echo through the theater like the horrific sounds of an anaconda swallowing a grown-ass man. I needn't have worried. I saw the film twice in two days and both audiences were sucked into every frame of the film for every second of its lightning-paced 90 minutes. At one point, a massive jump scare made someone in the sold-out showing whimper in fear, causing the entire theater to let out a giant laugh of relief. In that moment I remembered why seeing a movie with a bunch of strangers was actually pretty fun.

"A Quiet Place" follows a family in the very near future, struggling to stay alive while surrounded by creatures that kill anything that makes a sound louder than a clap. The family goes everywhere barefoot on paths of sand the father has spread out between the house, the barn and the local small town where they still go hunting for supplies.

The scope of "A Quiet Place" is laser focused, as co-writer/director/star John Krasinski isn't interested in what's going on outside the purview of this one family. If your suspension of disbelief hinges on knowing what the military is up to or where the monsters come from, then expect to be disappointed. This is character-driven suspense and horror, not a socio-political look at how the world would handle an alien invasion.

As original as the film is, Krasinski's inspirations are also spread throughout the nearly perfect creature feature. It's like he took his love of "Jaws," "Signs," and "Tremors," and made the monster movie he's wanted to see since he was a kid. There's not a wasted second in "A Quiet Place," with every minute of its runtime either dedicated to scaring the crap out of you, or creating lovely little character moments so we're invested in the central family.

There are a few little nits that can be picked, but overall, "A Quiet Place" not only shows that Krasinski is an emerging talent in the director's chair, but that the horror genre is alive and well when placed in assured and capable hands. It also gave me faith in the theatrical experience by proving that it's more fun to get scared when surrounded by other people who are after the same thing. "A Quiet Place" is the real deal. It'll make you jump and shiver and squeal...you know, if that's your thing.