I Made it a Blockbuster Night | Film | Bend | The Source Weekly - Bend, Oregon

I Made it a Blockbuster Night

"The Last Blockbuster" finally has its premiere

The most meta moment of my life happened this past weekend, and it was amazing. I went to the world premiere of "The Last Blockbuster," a movie that I'm in, about a dying form of entertainment, shown at a pop-up drive-in movie theater, which is in itself a dead form of entertainment, during a global pandemic when all movie theaters are hovering dangerously close to being extinct themselves. 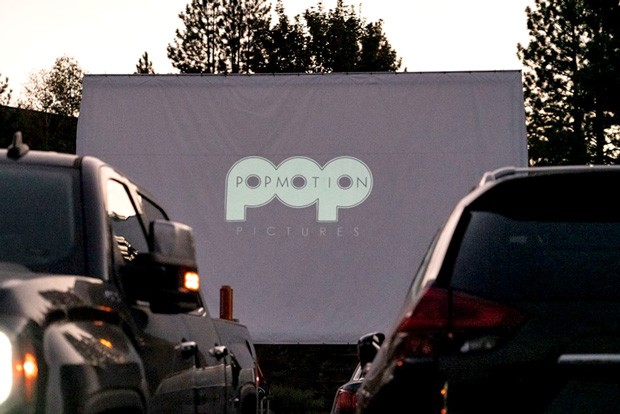 The surreality of watching myself on the big screen talking about movies while drinking Deschutes Brewery beer across the way from an empty Regal Cinemas was not lost on me and capped off an evening I'll never forget. Luckily, Taylor Morden and Zeke Kamm's documentary, "The Last Blockbuster," is a warm-hearted and crowd-pleasing look at how much fun it is to just enjoy something, non-cynically, and not care how dorky it makes you.

I've spent months writing about "The Last Blockbuster," so finally getting to see the finished product (along with a packed parking lot full of Central Oregonians) was hugely satisfying. Even knowing some of what the film had in store couldn't have prepared me for the biggest surprise of the movie: that Bend herself is the main character.

While "The Last Blockbuster" does spend most of its runtime talking about the little video store that could, it also lays out why Bend is the obvious choice for this final outpost of America's lost childhood: Bend is, ultimately, kind of weird. It's a quirky town that, in the film, I compare to a hybrid of Twin Peaks and Gravity Falls. Sure, this town loves movies as the Regal Cinemas on a Saturday night (six months ago) can attest, but it also loves a throwback; anything that can keep us feeling like we're still in a Norman Rockwell painting, as least for one more day.

"The Last Blockbuster" is a great documentary and I'm not just saying that because I'm in it (although you totally shouldn't trust me because I'm in it), but because it's a movie that is coming out at the perfect time in a country that desperately needs to see it.

My grandma makes fun of me because she thinks I read too deeply into movies and books, but this time I'm totally right: "The Last Blockbuster" movie isn't just important as a documentary about a dying mode of entertainment or about the wonderful people like General Manager Sandi Harding, who keep the store alive.

The movie is important because our country is on fire. It's finally out in the open that people, generally, don't really get along and that our differences are apparently so vast and insurmountable that we can't even agree on how to try and keep each other safe. "The Last Blockbuster" seeks to remind us of the people we are underneath that. It's a movie about what we have in common and what we used to share with each other; it's about something simple and communal in a time where a single-serving reality is necessary.

But you can't take my word for it. I'm biased as all hell, and I just spent hours writing about a movie in which I talk about movies that I watched at an honest-to-god drive-in. Don't listen to me. I'm not even sure what's real anymore.