I Scream for Ice Cream

From soft serve to gelato, find your dream cream nearby

First there was hand-cranked homemade peach ice cream at my Nanny Britt's on summer Sunday afternoons. Then there was soft serve from my hometown Dairy Queen on warm, humid evenings after my little brother's baseball games. Summertime conjures up fond ice cream eating memories, and constant cravings.

From homemade to soft serve to stir-fried (explanation coming) to gelato, Central Oregon has a little of it all. I've tasted every frozen confection in this article, so you're getting first-hand reviews. 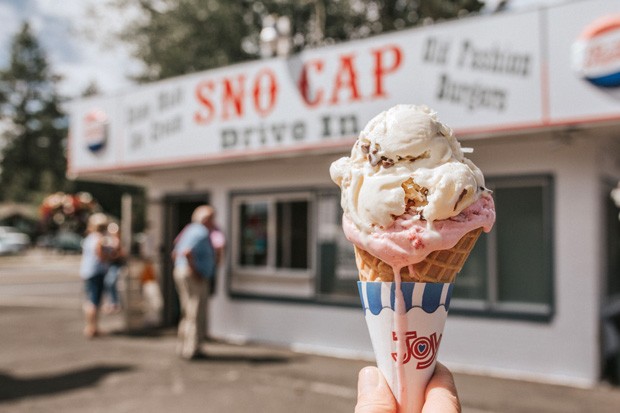 We'll start with my first love: Homemade ice cream, which you can find in numerous flavors at the Sno Cap Drive In on West Cascade Avenue in Sisters. If you're driving through Sisters on the main highway, look to your right before you get to the new roundabout and you can't miss the white block building with blue and red trim. I go for two scoops; strawberry and Almond Joy (almond ice cream with coconut and chocolate chips). Forget carbs, calories and sugar; we're not counting.

Soft serve has been around since the 1930s in the U.S. and was invented either by Dairy Queen, Tom Carvel or U.K. Prime Minister Margaret Thatcher (look it up if you don't believe me). It's softer and less dense than regular ice cream, thanks to air being introduced during freezing. Since 1957, Tastee Treet on Third Street in Prineville has offered creamy soft serve. As far as I'm concerned there's only one choice and that's half chocolate, half vanilla swirl on a traditional cone. Or get super nostalgic with the old-fashioned Banana Split, made with soft serve or hand-packed scoops.

Two down, two to go.

Next stop, River's Place food cart yard across from Costco in Bend. That's where you'll find the Dreams Handcrafted Rolled Ice Cream bus every other weekend. Rolled ice cream is also known as stir-fried ice cream. The fresh liquid ice cream mix is spread onto an extremely cold surface. The mixture is churned and turned (just like stir-fry) with two metal spatulas. Once solidified, the ice cream is flattened and then scraped into rolls. The rolls are put into a cup and topped with goodies. Goodies can also be mixed in during the churning and turning process. May I suggest the "Go for Your Dreams" choice, with blueberries, banana, coconut and honey drizzle, or perhaps "Rising Dreams" made with freshly ground Brewed Awakenings coffee beans. As exuberant owner Steven Nunes puts it, "Ice cream was made to be rolled!" Watching the rolling process is almost as much fun as eating the delicious ice cream. Almost.

This tour would not be complete without a trip to Bonta Natural Artisan Gelato. Whether stopping by the scoop shop in downtown Bend, or the new east side tasting room at 924 SE Wilson Avenue, there's a grand selection of flavors to try daily. Give me their signature Dulce de Leche with Sea Salt any day.

Bonta owner Juli Labhart explains that the difference between gelato and American ice cream is less air and less butterfat in the gelato, which is also served at a warmer temperature than regular ice cream. Labhart and her husband, Jeff, fell in love with gelato while backpacking around the world. After training under Italian gelato masters, they began developing their own recipes using as many local, organic, fair trade ingredients as they could to make the highest-quality gelato possible.

With so many delicious choices out there, this is an official proclamation that Central Oregon is a bona fide ice cream mecca!