If Allowed, Raccoons Will Stay

Like deer, raccoons shouldn't be fed by humans. Take this hilarious tale as proof 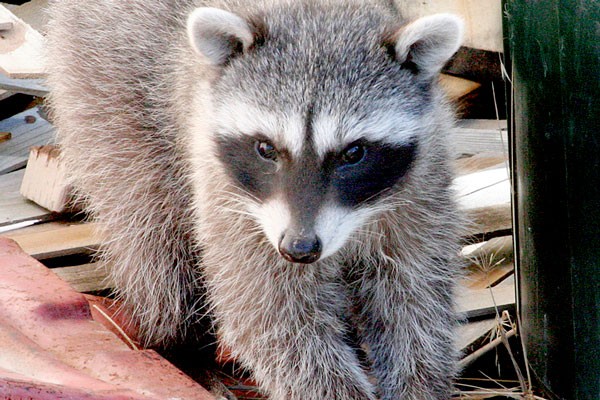 Our common variety raccoon, usually found near water, always mooching, is truly a wonder. Raccoons can get by on just about anything edible left out on the back porch, and once they've found a food source, they're reluctant to change their habits.

Feeding mule deer is a very bad habit, but feeding raccoons is a lot more dangerous, and once started, can get out of control. The human who starts it can go to the poorhouse—or madhouse—trying to keep up. Unlike humans—and most of other creatures who live on this wonderful old planet Earth, raccoons can push Darwin's theory of adapting into one lifetime. I have personally watched a family of raccoons move into a neighborhood and start experimenting with harvesting food in what appears to be a very thoughtful manner.

While working as the staff naturalist for the Oregon Museum of Science & Industry in Portland in the '60s, a homeowner in Lake Oswego shared his observations of a family of raccoons that found a home under a dumpster behind a grocery store. The raccoons knew when the dumpster was open and took advantage of every moment the cover was left up, foraging not just for anything to eat, but what they "liked" to eat. Then they discovered my informant was feeding his German Shepherd on the back porch, placing delightful canned and pellet food in the doggie dish.

In spite of the fact the dog outweighed the coon two to one and could tear it apart if it had the opportunity, within two weeks, the raccoons had taught the German Shepherd to climb trees and share its food‚ or else. It eventually got to the point when the homeowner began feeding the dog in the house. That irked the raccoons and they'd pound on the back door to be fed outside, and I'll be dinked if the homeowner didn't do that.

Do you think your neighbor would feed you if you pounded on his back door to be fed? He wouldn't; he'd call a cop. And yet those wise and bold raccoons get away with it.

When I was the naturalist for OMSI, I ended up taking care of and placing wild animals back into the wild that their keepers had gotten tired of—like skunks that had been de-scented by a vet and turned into a house pet. When they became adults and started tearing things up in the house, they weren't so "cute" anymore, and zoos would end up with them. Zoos can handle only so much, and then suckers like me would try to place them back into the wild.

The worst animal to (attempt to) send back out into the wild is a raccoon. They are extremely reluctant to give up mooching and can be really pestiferous at it. Often they'd learn to open the refrigerator door on their own, and/or learn where the cookies and hamburger are kept and be obnoxious about getting their way.

I had a particularly stubborn raccoon that I put back into the wild again and again that about drove me nuts. I was batchin' at that time and tried to convince the coon it was better off out in the wild. But it actually learned how to get up on the front or back door and swing on the doorknob until the door opened and then sneak into the house, get into the fridge and pig out. And of course, I often forgot to lock the doors.

I came home one afternoon right after work and was getting ready to go on a date. I started the bath water running and was in the bedroom getting my clean clothes out when suddenly I heard the familiar song of a raccoon having a wonderful time. They sing, you know.

I ran out of the bedroom and sure enough, the front door was wide open and the bathroom door was closed. "On no!" I shouted, and ran up to the bathroom door...only to find it locked. That sly, young whippersnapper of a coon had gotten into the bathroom, locked the door and was in the bathtub frolicking and singing.

The big problem was the bathtub was still filling and that blinkity-blankity coon was playing in it. I actually had to take the bathroom window out of the frame—from outside the house—in a hurry to keep the bathtub from running over, and in so doing I really was not in a good mood when I arrived inside.


That sly, young whippersnapper of a coon had gotten into the bathroom, locked the door and was in the bathtub frolicking and singing. tweet this

I grabbed the coon right by the back of his neck in a iron grip so he couldn't get at me—he'd have torn my arm off if he could! I took him out of the house and ran down the road about 100 yards (in my underwear) to a huge blackberry patch. Then I spun around like an Olympic discus-thrower, and at about the 5th spin, gave that infernal coon all I could and sent him sailing out into the huge blackberry patch. All the way though his flight he was screaming at me, using language that only another raccoon could understand, which I'm sure was not polite. The best part of this story is every time I saw that coon from that day on he gave me a wide berth, and eventually vanished.

Raccoons have heavy fur, used back in the late 1800s and early 1900s for outdoor clothing. The name "raccoon" was adopted into the English language by John Smith from the Colony of Virginia from early contact with the Powhatan People, who pronounced it, "aroughcun." The Algonquin People knew them as the "ahrah-koon-em," "the one who rubs, scrubs and scratches with its hands."

Trappers throughout the U.S. sold raccoon fur for good prices and even sold live animals to the Russians for the coon's heavy, warm fur. The Russians knew them as poloskuns, the "rinsers." They probably also found coons could open their food caches and thereby make an annoying nuisance of themselves.

So, be forewarned. If you have a raccoon—or worse yet, plural raccoons around your place, don't leave anything around for them to eat. Once they've adapted to being fed anything, they'll camp on your doorstep and drive you nuts! Wildlife is best left wild, whether they be mice, skunks, mule deer, raccoons or bull frogs!

Speaking of Outside World, jim Anderson