If It's Worth Doing, It's Probably Going to Cost Something | Editorial | Bend | The Source Weekly - Bend, Oregon

If It's Worth Doing, It's Probably Going to Cost Something

Last week, the Bend City Council voted 6-1 in favor of setting up Tax Increment Financing that will support the City's Core Area Plan—effectively bringing in millions of dollars in funding to help revitalize areas of inner Bend that are ripe for more housing, more businesses and better infrastructure. Bend is growing—that's not a secret—and while the most recent Urban Growth Boundary expansion offers some places to grow on the outskirts of the city, there's enormous potential right in the center of town, just east of downtown and east of the area around the Box Factory. Code changes intended to encourage development in those areas was one avenue city leaders pursued, but those have borne little fruit. Few, if any, new buildings have popped up in the Bend Central District or the KorPine area thus far. The plan just approved by the City Council, however, is intended to give the areas the boost they need to make them more attractive and development-worthy. But like anything worth doing, it's going to cost something. This time, it's the other taxing districts that will feel the rub. 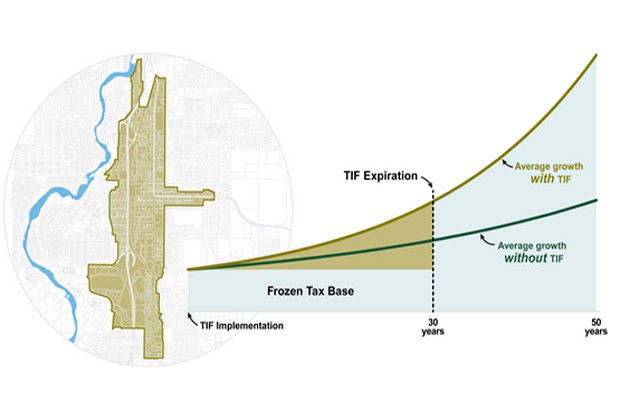 Tax Increment Financing doesn't increase taxes for property owners, but instead, essentially peels off the increase in tax revenues (the ones coming from that Core Area) that would otherwise go to other entities, such as Bend Park and Recreation District or the Deschutes Public Library, and sets that money aside for the Core Area Plan. Do that for a period of 30 years, and you have an increasing pot of money to work with to help improve pedestrian access (adding a pedestrian bridge across Highway 97 and the Bend Parkway is one part of the plan), improve sewer and other infrastructure, and even add incentives for affordable housing projects, among many other improvement projects.

The rub, of course, is those other public entities won't see the increase in tax revenues that they would otherwise see. Essentially, with a few exceptions, those entities get their 2020-level tax revenues, and stay that way for 30 years. That is going to hurt—but it's a type of hurt that could lead to even more tax revenues when the 30-year period is over. Tax revenues in the Core Area will increase as new buildings and new developments go in—properties that will have tax liability based on their new, increased value. Thirty years is a long time for those other entities that have to stay at a certain level of tax revenue, but following that, Bend will have, ideally, a vibrant area just outside of downtown, where people of many ages and income levels can work and play and avoid long commutes that snarl traffic.

Ideally, the notion of fostering affordable and low-income housing in the area won't get lost in the enthusiasm around building out this "new" part of Bend. While the plan includes provisions for affordable and low-income housing, the committees and leaders overseeing the plan should be vigilant to ensure that we don't see the Core Area become awash in high-end condos and other luxury developments that push out the people who benefit most from living in a centrally located zone—those who, either by choice or necessity—don't drive everywhere they go, for example.

The Bend City Council still needs to vote a second time on Aug. 19 to push the plan forward, but this is a good thing for Bend.

At the same City Council meeting, councilors also voted in favor of referring the City's Transportation Bond measure to the November ballot. While we advocated in favor of this plan—which included funding both for major road improvements and expansions, as well as bike and pedestrian improvements—when things in the world were more "normal," we hesitate now. The new language around the bond would delay an increase in local property taxes until 2022—but with so much uncertainty in the state, local and national economy, putting a tax increase on the November ballot is risky. While the TIF/Core Area plan seems reasonable, since locals won't have to pay more out of their own pockets, we're not convinced voters will vote in favor of any increase right now—even one that happens two years down the road. Set a "caution" sign out for the prospects for the Transportation Bond.