If You Build It, They Will Come | Local News | Bend | The Source Weekly - Bend, Oregon

If You Build It, They Will Come

November 19, 2019
comment
Back in September, the Source reported that the sand volleyball courts in the Old Mill District would be closing. Now we've confirmed the new plan to bring courts back to Bend.

"BPRD was aware that the courts at the Old Mill would be closing, and was interested in discussing options with North Pacific Juniors Volleyball Club when they approached us asking to partner to replace the courts elsewhere," said Quinn Keever, park planner at BPRD.

Under the proposed terms of the project, NPJ would pay all development costs, maintain and operate the courts and have first right to use the courts. When NPJ isn't using the courts, they will be open to the public. Two courts—two more than were at the Old Mill facility—will be available to the public at all times. The proposed courts would be located in the northeast quadrant of the park, just south of the dog park. 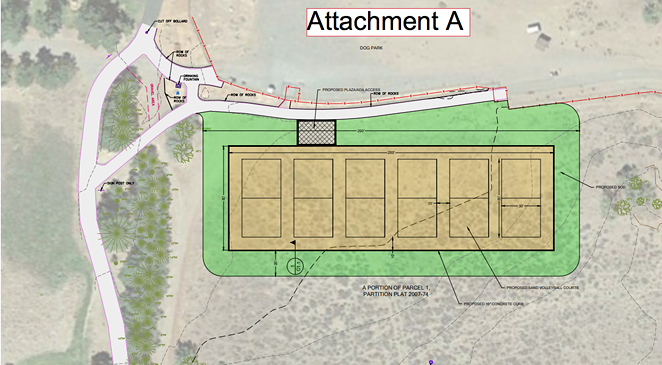 "Pine Nursery Park is the only developed park with enough available space," Keever told the Source. "We needed a park with enough space for the courts, sufficient parking, extra space to accommodate crowds during tournaments and a park where sand volleyball would not displace existing uses."

Pine Nursery is also home to the Bend Pickleball Club's courts, a popular feature built in partnership with the club. Along with the pickleball courts, the partnership between BPRD and NPJ would be similar to the one with the Bend FC Timbers soccer club, and the construction of its synthetic turf fields at Pine Nursery.

"As Bend grows, there are more diverse and specialized recreation interests. BPRD strives to serve as many residents as possible, but it isn’t always possible to meet the needs of every user group, particularly when those user groups require more specialized amenities, such as artificial turf for the FC Timbers, or sand volleyball courts for NPJ," says Keever. "BPRD conducts statistically valid surveys every five years to determine the community’s needs for 40 different types of recreation. For recreation needs or specialties that don’t score as high as others, we look for partnerships from the user groups to help us provide the amenity. The model works well because it maximizes the taxpayer dollar, while serving a recreation group that might not otherwise be served."

There's hope among BPRD that the project will begin to move quickly as to fill this recent recreational void.

"Once we had approval from the BPRD Board of Directors to enter into a ground lease with NPJ, we started working with our legal team to develop the documents," adds Keever. "We hope to have a draft of the ground lease ready for NPJ’s review soon, at which point NPJ will finalize their designs and apply for permits from the City of Bend." The BPRD board approved the lease Nov. 5.