If You're New Here: Bend Breweries

Despite the Bend Ale Trail, some breweries are still below the radar

Some breweries and certain beers are completely engrained in the Bendite lifestyle. Even if you arrived in town today, you've assuredly enjoyed a Deschutes Fresh Squeezed IPA or a Black Butte Porter (which make up a sizeable chunk of the brewery's roughly quarter-million-barrel annual production. Likewise, its new subsidiary, Boneyard Brewing, enjoys a reputation for RPM IPA well beyond city limits.

But we don't get to call this place Beervana for having a mere dozen breweries. Furthermore, local brewers excel at brewing more than just India pale ales, though it pained me to use the word "just" right there. So, for hopheads, malt lovers and those who need their beers to be beyond the ordinary, here are some of the Bend breweries with less-trodden paths leading to their doors or beer gardens.

How can a brewery that's literally at the corner of Wall and Oregon be considered underground? Because the brewery, actually based in Redmond, operates The Cellar, a truly subterranean tasting room that's easy to miss—especially if you're distracted by the smell of Goody's Chocolates nearby.


Porter does brew the incredible 1772 Porter, but also a wealth of English styles that tend to get less love from the IPA factories. Every beer is cask-conditioned and served on a hand-pump in the traditional fashion of UK "real ales." By virtue of being only naturally carbonated and served at comparatively warmer cellar temps (around 55 degrees), beers such as the session-strength 4.3% ABV Best Bitter showcase the infinite drinkability brought to us by husband-and-wife operators, Deven and Avara Roberts. Do not skip on ordering a meat pie!

Practically adjacent to GoodLife Brewing—big enough to have its own bocce courts in its massive biergarten—Ale Apothecary offers a respite from hop-forward beers by serving exclusively sour-forward beers. Another brewery that specializes in a singular direction, Ale Apothecary beers are inoculated with wild yeasts and souring microorganisms like lactobaccillus. The resulting beers, like their flagship Sahalie, named after co-owners Paul and Staci's daughter (and/or the beautiful waterfall), are refreshingly tart and complex. 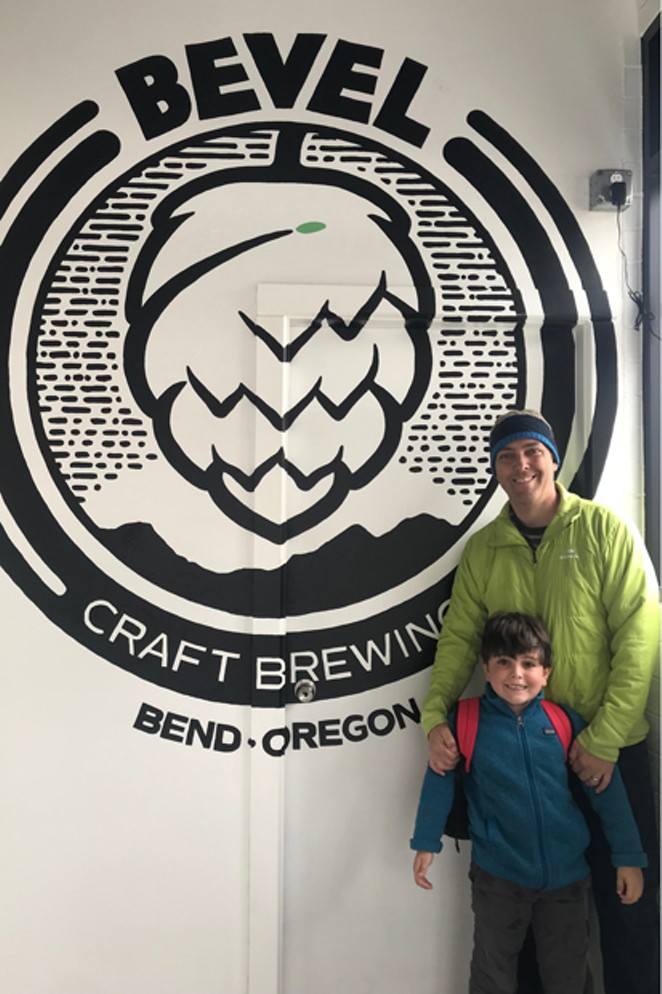 Head southeast and you'll discover another of our mighty husband-wife operations. World champion disc golfers Nate and Valerie Doss know that no round of disc golf is replete without a cold one in your free hand, so they established Bevel in 2019, making it Bend's youngest production brewery. The taproom offers guests sunny sippers like Steady Pilsner, but mostly a wide array of hoppier beers from Funday IPA—a rare sub-5-percent alcohol IPA—to the Citra hop bomb Iron Leaf—an over-8-percent imperial IPA. And for fans of the throwback Cascadian Dark Ale style, a sort of cross between a stout and an IPA, try Black Ace. If you're feeling peckish, four food carts are part of the 9th Street Village.

You'll also find food trucks on site at Bridge 99, including Bad Boys BBQ (although they are currently closed due to staffing issues). Bridge 99 marks the angler's paradise on the Metolius River near Sisters and that number is, according to legend, how many bottles of beer are on the wall. You can get cans or crowlers to go, but stick around on the popular patio—pooches welcome—and enjoy some Headwater Hefe or its blood orange-imbued counterpart. For one of the tastiest dessert-inspired beers in town, there's fan favorite Tiramisu Porter.

Literally around the corner from Bridge 99, Oblivion may no longer operate the pub on Galveston (now occupied by Sunriver Brewing), but the tasting room is a great spot to hang out while sipping fan fave Backside IPA. The classic West Coast IPA bursts with citrus rind and pine needle notes, while Oblivious Blonde is the portrait of an easy-drinking beer. Show up on Fridays and after you discover which of their beers is your favorite, you can fill your growler to take more home for just five bucks.