I'm Covered In Tattoos and I Bang On Drums

The Coathangers drummer dishes on her beginnings in music

Some people were born to rock. Stephanie Luke and The Coathangers are definitely those people. Starting a band on a whim because of pure passion and no desire to do anything else is pure evidence of that. You won't get anything weak from the Atlanta-conceived band. They come full force; no regrets. 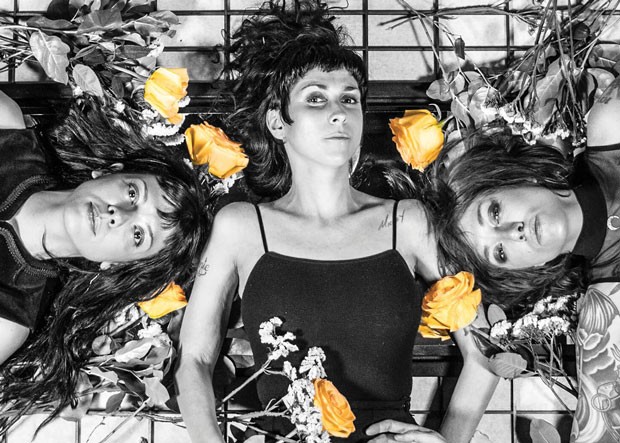 Over the phone Luke tells me about wanting to drum until she's 90, her early days in music and the band's upcoming album, "The Devil You Know," which Luke says is filled with "amazing jams."

Source Weekly: Do you remember the moment or time you knew music was something you wanted to pursue?

Stephanie Luke: Well, I knew I didn't want to have a real job. It was like 2003, 2004, after I tried college for so many years. I just wasn't good at it, and I hated it. I moved out to L.A. and tried tour managing for different bands and I was like, 'F*ck this sh*t, this is insane!' I want to be in the band. I don't want to be the 'momager.' Then I moved back to Atlanta and met up with Julia and we were like, 'Why don't we just do this?' It's terrifying, but everyone else is doing it. Why can't we?

SW: Growing up, were you always attracted to music?

SL: As a kid I was a total band nerd. I played saxophone and violin. My parents did not want me playing—'young ladies do not play drums'—so I played all these other instruments I was awful at and sang in front of the mirror like everybody else. Or I hope everyone else. It's like, who doesn't want to be a rock and roller?

SW: Looking back, what's it feel like to reflect on the fact you're doing this?

SL: It's hilarious! Like, I was supposed to be a doctor, a lawyer, but I guess dad was wrong on that. I'm covered in tattoos and I bang on drums.

SW: When you were coming up, can you talk about some of the challenges that came with being an all-female group in the punk scene?

SL: If you don't like it just don't listen to it, ya know? Don't come to the show. If you don't like broccoli, don't eat broccoli! If you don't agree with what we're saying then just look away. At the same time I feel like it's hard for any band, female, male or whatever. All we want is just to have an equal playing field. It's not about being treated more special than anyone else.

SW: Right now you have two new singles out from your upcoming album. Both of them make pretty strong statements. Can you talk a little about each?

SL: There's "Bimbo" and "F The NRA." "Bimbo" is just a weird little song. It's a fun little ditty. It sounds like a really happy song but it's not that happy. We chose it because it's a good balance with the other songs on the album. "F The NRA" is pretty obvious. Julia wrote the lyrics to that and I think she did it in such a beautiful way. It's not about being angry, it's just about – we haven't been too political in the past and this album we were just like, 'f*ck it.' There's so much to say. We shouldn't be afraid to say what we want to say in this country. It's just how we feel. If you can't say what you want to say in your music then what's the point?

"Due to the unsafe travel conditions on the passes and Central Oregon, we regret that we must cancel the performance at Volcanic Theatre Pub in Bend, OR. It's for the safety for everyone involved. Please stay close to our pages for a makeup date"

Refunds at point of purchase, if you bought online you'll see your refund tonight.