No one on the planet has the same relationship with their family as anyone else does. We're all either close or distant or estranged or connected or some strange derivation of feelings and emotions that can sometimes be impossible to explain to someone outside of your bizarre little unit. Yet somehow, really good artists—whether they be novelists, songwriters, filmmakers or anyone in between, can take the specificity of their lives and personal stories and create something that feels universal.

When I was a kid, I had a stepdad who didn't like me very much and would take any excuse he could to beat the holy hell out of me. As I got older, I didn't really have a way to process what that was doing to my head until I saw the Robert De Niro and Leonardo DiCaprio movie, "This Boy's Life" (based on an autobiography by Tobias Wolff). It's Wolff's story about growing up with his mother and abusive stepfather in the 1950s, and the story is incredibly specific to Wolff and what he went through. But after seeing the movie I felt like I wasn't going through everything alone. I felt seen. 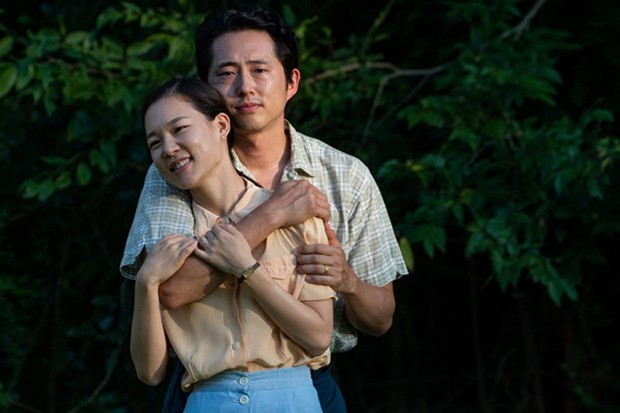 I've said it a thousand times in these pages over the years, but the most important thing that cinema can do for the world is create empathy—not just for different cultures and religions and people, but for ourselves and the struggles we think we're fighting in the dark. Good movies are a light, and that illumination can get us through a bad period that we think is our whole life.

Related The Hunt For B-Movie Perfection: ''Shadow in the Cloud'' is a ridiculous delight

All of that is to say that I dearly hope the beautiful new film, "Minari," allows someone out in the world to feel seen.

The semi-autobiographical film from writer-director Lee Isaac Chung tells the story of a Korean American family that moves from California to rural Arkansas in order to grow Korean produce, and the life-changing struggles they have along the way.

I'm glad I didn't know anything else about "Minari," because watching this quiet, unassuming film grow from a ton of tiny little moments into something much grander and more affecting was a joy. tweet this

I went into this movie knowing nothing aside from the fact that Steven Yeun was the star and, with his work in this and 2018's South Korean masterpiece "Burning," he is becoming one of the most nuanced and astoundingly subtle actors working today. I'm glad I didn't know anything else about "Minari," because watching this quiet, unassuming film grow from a ton of tiny little moments into something much grander and more affecting was a joy.

"Minari," (named after the Korean herb that can thrive no matter where it's planted) feels so specific to the South Korean immigrant experience that it's remarkable when the story grows into a dozen new things in the telling. It's not only a detailed and personal look at the immigrant experience, but a parable on the pursuit of the American dream, a melancholic meditation on the complexities of marriage, a coming-of-age poem about growing up in surroundings that make you feel alien and a delicate reflection on aging that bursts with restrained tenderness.

That's a lot of things for a movie to be, but the best movies are like the most interesting people: filled to the brim with complexities that constantly contradict each other until they finally coalesce into a complete portrait. "Minari" is filled with a quiet empathy that we only have to reach out and touch in order to feel understood. It exists as a reflection of our own families, our own struggles and our own moments of loss and triumph, while asking us what we need for ourselves to feel understood. Sometimes, being asked is enough.

Related May the Source Be With You: January's roundup of podcasts, shows and more

May the Source Be With You
January's roundup of podcasts, shows and more
By Jared Rasic
Film