Love him or hate him, no one works harder than Cruise 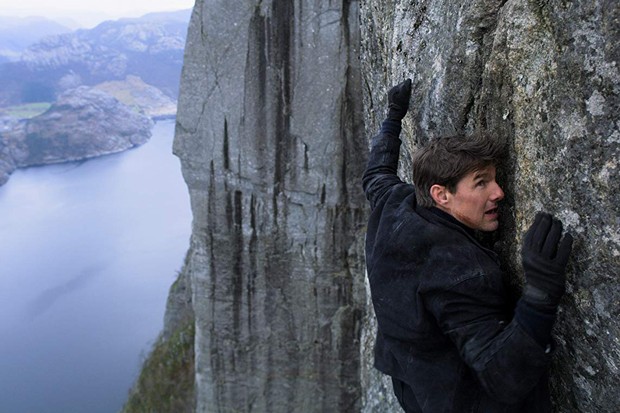 I really want to know when Tom Cruise became the white Jackie Chan. He's always tried to do as many of his own stunts as he could—training to be a race car driver for "Days of Thunder" or how to expertly handle a motorcycle in "Mission Impossible 2." Even knowing that he didn't die shooting these movies, it's still a huge rush watching him throw himself off of rooftops or hanging from the side of a helicopter.

Love him or hate him, Cruise wants to earn the dollars you're spending at the movies. He's like the anti-Bruce Willis, who can barely stifle a yawn on camera anymore. Cruise will shatter every bone in his body to make sure we walk out of the theater with a smile on our face and a desire to shell out another $15 for all the future Impossible Missions he decides to make.

Ethan Hunt is the perfect character for Cruise to keep coming back to because, even after six films in the franchise, we still don't know him much better as a character than we did after the first one. Hunt's enigmatic vibe perfectly compliments Cruise's acting choices, letting the audience fill in Hunt's inner life while simultaneously avoiding the depth that would allow us to see Cruise as something more than a movie star.

"Mission Impossible: Fallout" is another high watermark for the series that doesn't quite reach the (literal) heights of "Ghost Protocol," but makes "Rogue Nation" look like a warmup for this adventure. Explaining the plot is pointless, as it's the most delightfully absurdist series of red herrings, MacGuffins and double crosses since Brian DePalma's underrated original. The story and structure are solid, but they really only exist so we can see Tom Cruise jump out of windows with the same fervor he jumped on couches.

This is the first movie of the summer than feels like a true blockbuster event film. It's truly a breathless thrill-ride that ratchets up the tension for every minute of its runtime while escalating the action sequences to dizzying and delirious proportions. As much as I love a nice quiet indie movie, "Fallout" is pure adventure storytelling that should silence even the most cynical of moviegoers. Your mission, if you choose to accept it, is to go have some heart-pounding fun at the movies.