October 01, 2018
comment
With growth around Central Oregon, wilderness areas tend to see an increase in traffic from humans. To reduce that human impact, the Upper Deschutes Watershed Council works to protect many of the waterways along the Deschutes River.

One of those projects is the Whychus Creek Management Plan, which UDWC has been working on for nearly a decade. Right now, the focus is on an area inside the Sisters city limits. The project has been incorporated into the city of Sisters comprehensive plan, which helped them receive funding from various sources. The first phase: creating a design plan. "The overall goal, of course, is to improve Whychus Creek ... it's a critical habitat for salmonids," explained Patrick Davenport, community development director for the City of Sisters. "That's an obvious, very important threatened species. Supporting their survival, but also to have water quality overall in the Deschutes River."

Another goal is to stabilize the banks of city-owned and privately owned properties along the creek, to slow erosion and protect threatened species.

"The part that we're working on right now is that section between the Locus Street Bridge and the Highway 20 bridge. That stretch of the creek runs through ... well, it splits Creekside Park and Creekside campgrounds," Davenport said.   "There are several project elements in this," Davenport said. "The first is to reduce or eliminate fish passage barriers. We have a varied sewer line underneath the creek that the concrete cap over it is causing a fish passage barrier for the little fish to swim upstream and do what they need to do to spawn and for habitat purposes."

The project will fix the concrete cap at low waters, and make it tougher for people to cross the creek in certain places. 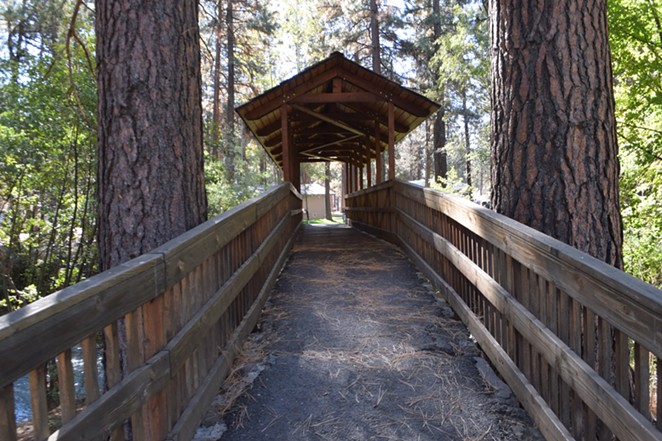 "Right now, on both sides of the creek and Creekside Park and the campground, users can just trample down across the bank and go into the creek at any point along the creek," Davenport said. "We want to consolidate access points and have those access points improved, that have steps, that are stabilized and people aren't trampling the bank side."

A third goal of the project is improving pedestrian access on the footbridge across the creek. It is not currently compliant with the Americans with Disabilities Act "in its steepness of the approach ramps," Davenport said. For the footbridge, the City received a grant from the State of Oregon and Oregon Parks and Recreation department.

UDWC also secured a $90,000 grant for the project, with the rest paid for through City funds.

The age of the park also means crews need to make significant adjustments to assure they do the work correctly.

"We have to respect the integrity of the concrete abutments for this project because they were put in the late '30s by the Works Progress Administration, back in the Depression," Davenport explained. "So the project element has to take into account the historical nature of the supporting abutments and be mindful of that. The state historic preservation office is keen on it as well.

"  The City will also be working to relocate a sewer line suspended on the upstream side of the bridge. Davenport said it will "most likely" be moved to underneath the creek.

The City of Sisters is focused on what’s within the city limits, while UDWC is working with private property owners to improve both upstream and downstream areas.  The City of Sisters hopes to have their design plan done by February of 2019, and then will move onto funding.  "We just hope people will respect and use the improved access," Davenport said. "We don't want to keep anybody out of the creek. That's not the point, but we've got to get them to access it where they're not just trampling down the creek bed... the side to the banks to the creek."