In a Tough Year, Some Cold Hard Cash for Area Nonprofits

January 06, 2021
comment
It was a little idea that grew into a big win for area nonprofits: Rather than having each nonprofit go it alone and raise their end-of-year funds through their own channels, why not offer a one-stop-shop for those nonprofits to gain more visibility? The idea for Central Oregon Gives, conceived in 2019, was the brainchild of What If We Could Founder Rys Fairbrother and Source Weekly Publisher Aaron Switzer. Little did they know that the idea they had to hopefully raise upward of $50,000 for local nonprofits would result in raising over 10 times that amount in the first year. 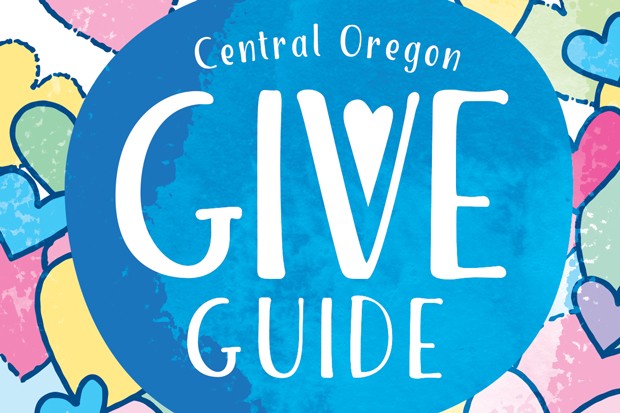 At the end of 2019, in its first year, the Central Oregon Gives program raised over $575,000 for local nonprofits, blowing the initial goal out of the water. At the end of 2020, Fairbrother and Switzer announced an even bigger collection, out-raising the 2019 total by a big amount, and exceeding the program’s 2020 goal to raise $500,00 in this challenging pandemic year.

As Fairbrother said in an email announcing the earnings, “With the uncertainty of 2020, we are more than pleased that this year’s total amount donated was more than 2019’s campaign, by over $100,000!”

“With all of the challenges that nonprofits are facing this year, it feels really good to see the Central Oregon community step up and give more than last year,” said Switzer. “When we started Central Oregon Gives this year during the pandemic, there was a real need for a digital giving opportunity and people really responded.”

The organizers say they believe the program saw so much success because of the unique “Perks” people can earn when they give to any one of the dozens of nonprofits listed on the Central Oregon Gives site. When someone donated to the program, which ended Dec. 31, they got a “Perk” such as a drink at Worthy Brewing, a kombucha from Humm, or a snack from Rockin’ Dave’s Bistro & Backstage Lounge—driving even more people to donate in order to see what “Perk” they would get that particular week. 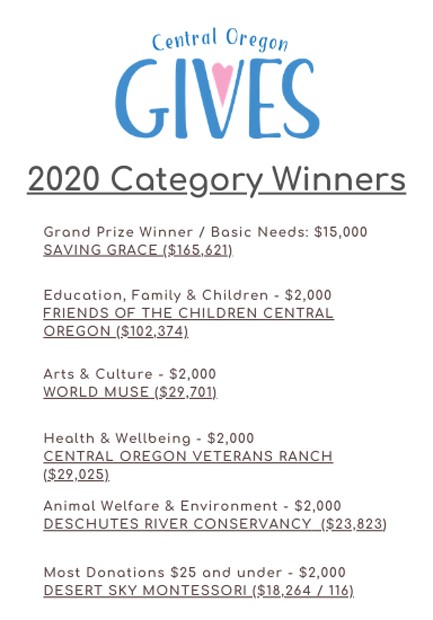 Through a $25,000 anonymous donation to the program, nonprofits also had the chance to earn additional money. The top-earning nonprofit in the program got a $15,000 bonus, while those earning the top amount in their individual category also had the opportunity to win an additional $2,000. Also, the nonprofit earning the most donations of $25 and under also earned a $2,000 prize. This year, Saving Grace was the top earner, winning the additional $15,000.

“I’m really in awe of the work Saving Grace put out this year and the amount of energy they have inside that organization,” Switzer said. “It was impressive.”

The nonprofits winning an additional $2,000 included Friends of the Children, which raised the most in the “Education, Family & Children” category; World Muse in the Arts & Culture category; Central Oregon Veterans Ranch in the Health & Wellbeing category and Deschutes River Conservancy in the Animal Welfare & Environment category. Earning the most donations of $25 and under was Desert Sky Montessori.

While the Central Oregon Gives site, where people could browse nonprofit profiles and donate to various ones, is now “parked” until the program resumes again mid-November, people interested in learning more about the nonprofits involved can visit the Source Weekly’s site, where we maintain a portal of profiles on each nonprofit in our “Give Guide” section.