In Praise of Shorebirds | The Source Weekly - Bend, Oregon

In Praise of Shorebirds

August is a great month to view shorebirds, which have departed from their nesting grounds and stop in at various Central Oregon watering holes to fuel up for the rest of their journeys to their wintering grounds.

"The numerous shallow lakes, wetlands and wet meadows, and even flooded fields in southeastern Oregon are crucial pit stops for entire populations of migrating and nesting shorebirds along the Pacific Flyway," said Anne White, conservation coordinator for the Oregon Natural Desert Association. "Some travel as far north as the Arctic Circle and as far south as South America. These stopover habitats are essential for birds to replenish their reserves where there are abundant invertebrate populations."

For non-birders, the term "shorebird" connotates birds found near coastal waters, but to birders and biologists, the word describes a group of wading birds arranged in the scientific order Charadriiformes and includes sandpipers, plovers, phalaropes, avocets, curlews, dowitchers and many other species. The genus name, Charadrius, is from a Greek word that means "gully" and refers to the shallow depressions used by plovers for nesting sites.

"There are certain species here that are not coastal," said Marty St. Louis, retired Oregon Department of Fish and Wildlife manager of the Summer Lake Wildlife Management Area. "What comes to mind is the black-necked stilt and western willet; there's an abundance of them here in the interior West."

When it comes to shorebirds, variation is the central theme. One look at the size and shape of a bird's bill can help to identify the species or at least place the bird in a certain group. The same holds true to some extent for their overall size, habitat preference or feeding activity.

“The numerous shallow lakes, wetlands and wet meadows, and even flooded fields in southeastern Oregon are crucial pit stops for entire populations of migrating and nesting shorebirds along the Pacific Flyway.”—Anne White tweet this

Sandpipers are generally small in size and have short straight or slightly-decurved bills designed for gleaning or probing for insects or aquatic invertebrates along shore edges or in soft mud. Known collectively as "peeps" or "stints" outside of the U.S., these smallish shorebirds run along the shoreline or wade into the shallows after prey.

Western and least sandpipers, two species commonly observed in Central Oregon and which nest in the Arctic or sub-Arctic areas, are both long-distance migrants. They employ a unique strategy in the fall as the adults leave the breeding grounds, prior to the juveniles, which will fatten up for their departure several weeks later. Though some travel south along the Pacific Flyway, others birds travel cross-country to the Atlantic Coast, then travel southward as far as South America. When ready to migrate, the juvenile sandpipers join in with other birds moving south. 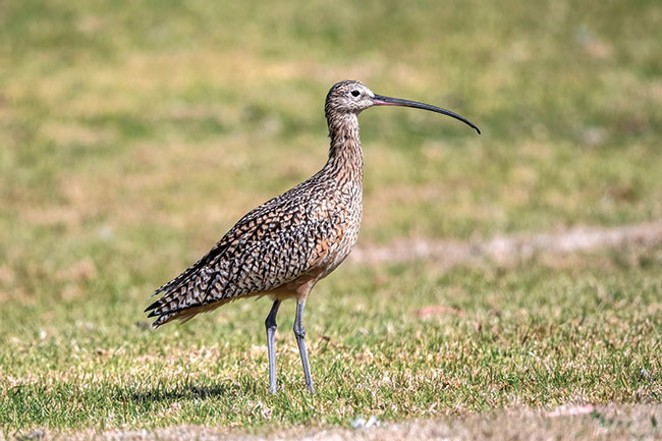 Other shorebirds that migrate through or nest in the region include black-necked stilt and American avocet. These long-legged shorebirds, standing about 14-18 inches tall, forage for aquatic invertebrates, crustaceans and insects in the shallows. The long, pointed bill of the stilt enables them to pick prey from the water's surface or muddy bottom while the upturned bill on the avocet is designed for sweeping through the water to snatch prey.

In contrast to the stilts and avocets, long-billed curlews are large shorebirds with long decurved bills. The bills either pick up prey such as grasshoppers and beetles out of grasslands or agricultural fields or are used to probe deep into soft mud for aquatic invertebrates, worms or crustaceans. Their loud, in-flight "kerlew" calls announce their presence.

This month is an ideal time for shorebird viewing in the Central Oregon region.

"Just about any species could show up during this time, which makes it quite exciting," said Chuck Gates of the Prineville Bird Club. "Common species seen locally in August would include killdeer, least sandpiper, western sandpiper, Baird's sandpiper, long-billed dowitcher, Wilson's phalarope, red-necked phalarope and greater yellowlegs. If you get lucky, you might see a real rarity such as sanderling or stilt sandpiper." Some shorebirds show up as early as June, but these are probably non-breeders or birds that had nest failures. For the western and least sandpipers, the adults leave the breeding grounds prior to the juveniles by several weeks. 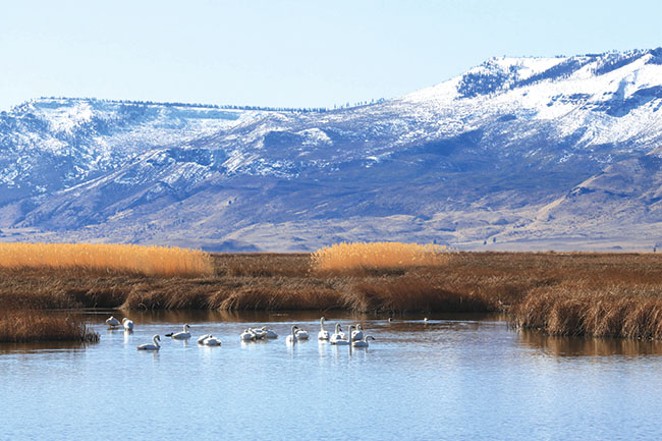 Within Central Oregon, there are numerous birding hotspots to view shorebirds including the Summer Lake Wildlife Management Area, Lake Abert (in good water years), Hatfield Ponds, Redmond Sewage Ponds, Haystack Reservoir and the Crooked River Wetlands in Prineville. Farther afield, areas such as the Malheur and Klamath National Wildlife Refuges and Warner Wetlands near Lakeview offer nesting and stopover habitats for these species, as well.

"The Prineville Bird Club teams up with the Crooked River Wetlands Volunteers and sponsors a Wetlands Walk on the First and Third Saturdays of the warmer months of the year," said Gates. "The walks in August and September are primarily focused on shorebirds because those are some of the most common birds there at those times."

The paved trails that loop through the wetlands offer visitors excellent and often close-up views of shorebirds and waterfowl feeding along the water's edge or in the ponds. The whirling feeding habit of the phalaropes is an interesting contrast to the staccato probing of the long-billed dowitchers.

The City of Bend's secondary-wastewater ponds are known as the Hatfield Ponds. One of the best areas to view shorebirds in Central Oregon, birders find that a spotting scope is handy to view birds from a distance. The East Cascades Audubon Society erected a beautiful bulletin board at the entrance with a map and collage of commonly observed birds. Though sometimes the gate is open, driving access is for City workers or law enforcement personnel who use the shooting range in the southeast corner of the property. For the rest of us it's walk-in only.

Nine species of shorebirds nest at Summer Lake, and the auto tour provides easy access to view these and migrant species from the car.

"Red-necked phalaropes are a sub-Arctic breeder, but this area is a corridor or pathway that they move through in spring or fall," said St. Louis, the retired Summer Lake manager. "In the last 10 years that I was there at the Wildlife Area, we really got aggressive with our utilization of water and enhancing the ability to move it around. There are time periods out there, also, where you can make adjustments to really favor shorebirds and other waterbirds, tying into their migration."

"In the spring, shorebirds are in a hurry to get up north and get the best breeding locations so they spend little time in our area," said Gates. "Fall is a different story. Birds slowly work their way south, feeding as they go. Since there is no rush, they may stay in one location for days or even weeks. Spring shorebird season lasts around a month. Fall shorebird season, by some standards, can be four months long."

Talking about shorebirds in the Interior West region has to include a conversation about water, especially in the closed basins fed by snowmelt, streams and springs—but impacted by irrigation, water impoundments and evapotranspiration.

"The numerous shallow lakes, wetlands and wet meadows, and even flooded fields in southeastern Oregon are crucial pitstops for entire populations of migrating and nesting shorebirds along the Pacific Flyway," said White of ONDA. "As the largest saline lake in the Pacific Northwest and one of only three hypersaline lakes in the western U.S., Lake Abert is a vital habitat to migrating birds. Populations of brine shrimp and alkali flies are each estimated to exceed 300 billion individuals in past years, providing an irreplaceable food source for avifauna."

The National Audubon Society includes the 57-square-mile Lake Abert and many other inland waterways as part of its Important Bird Areas.

"Since 2011, we've been doing bird surveys at Lake Abert in the summer and that means mostly shorebirds," said John Reuland, volunteer for East Cascades Audubon Society. "During migratory season, we've seen a couple hundred thousand phalaropes out on the lake, as well as numerous willets, American avocets and black-necked stilts."

But Lake Abert is currently suffering from drought, upstream irrigation, holding ponds and a lack of instream water rights connected to the lake. "Our data shows, from a shorebird perspective, the lake is getting destroyed," added Reuland. "The salinity is so high that even the brine shrimp that live out there can't tolerate it."

Bird studies throughout the region have shown the inner-connectedness of these inland habitats for migratory stopovers both between years and within years. "These birds are highly capable and mobile to be able to move about and exploit these habitats when they are in prime condition," said St. Louis. However, summer evapotranspiration losses may be in the range of 48-52 inches per year, which can dramatically affect these inland lakes, already stressed by drought, and impact the quality of the habitat for migrating birds.

"Solving for the increasingly frequent desiccation of Lake Abert is a complex task that will require state government to take action to measure, monitor, allocate, permit and even apply for water rights for Lake Abert in the Chewaucan River basin," said White. ONDA and other organizations are advocating for protection of the lake. "It's really impressive when the lake is full of water but it's kind of heartbreaking where it is now," said Reuland.

Continued monitoring of avian populations at Lake Abert and upcoming studies focused on the larger scale distribution of shorebirds across the Great Basin will contribute to understanding the status of shorebirds nesting and migrating through the inland West. Advocacy may lead to legislative action on behalf of Abert Lake, so stay tuned on that front. In the meantime, why not undertake a road trip to witness these shorebirds on their amazing southbound journey and experience this cyclical wonder of Nature that has been going on for thousands of years.