Products to make homebrewing a snap 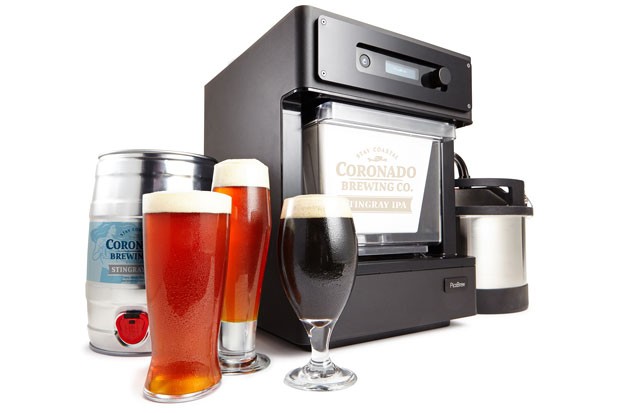 Homebrewing has gone a long way since Jimmy Carter legalized it on the federal level in 1978. The early days were packed with innovative people, including Ken Grossman, who welded kettles together from things such as used dairy equipment and scrapyard metal to put together his first system. (Grossman later founded Sierra Nevada Brewing in 1980 and sold that old dairy-based rig to Mad River Brewing in 1989; it's now back with Sierra Nevada, where he plans to brew with it again next year.)

If Reagan-era homebrewing meant needing to know how to weld tanks together, the 21st century has made crafting beer (and other adult beverages) about as difficult as operating a Keurig machine. Take a look at the lineup from PicoBrew, whose Model C retails for $399 and is designed to look fancy atop a kitchen counter. Buy a PicoPak from the website (around $25-30), stick it in the machine, add distilled water, let it ferment in the included keg for a week or so, and bam, 5 liters of craft beer. The machine takes care of everything else, including the grain-mash process and multiple hop additions at different stages of the brew, and there's a phone app for monitoring fermentation process 24/7. (PicoPaks feature both original and brewery-licensed recipes; users can also freestyle their own inventions on the site.)

Why stop with beer, however? The PicoStill attachment ($249), available for pre-order right now, makes it just as easy to distill gin, whiskey or tequila on the countertop, as well as do things like making essential oils from hops, herbs and spices. The Alchema ($499), meanwhile, does the same thing for hard cider. Look up a recipe, toss in fruit, sugar, water and a yeast packet, and the job's done. A little self-crafted pineapple strawberry cider for the dog days of summer? Yes, please.

Of course, inserting a pre-mixed pack into a kitchen appliance arguably veers a bit from the real spirit of homebrewing. The Brewers Association reports that 6,655 pro breweries are active in the United States as of June 2018, and the majority of them were founded and operated by people who joined the hobby with a Mr. Beer or similar low-budget homebrew starter kit and began crafting their own recipes from the get-go. The classic 5-gallon starter kit, available at Bend's own Brew Shop and a million online sites, goes for around $100 and comes with all the equipment needed for enjoyable Saturday afternoons brewing and barbecuing in the backyard. Just watch out—like a lot of hobbies, it can get addictive (and expensive) the more one dives into it.