Despite the fact that everyone seems to want to move here, Oregon is not exactly the happiest state in the union. But it's not the most miserable, either. According to the 2014 Gallup-Healthways Well-Being Index, Oregon ranked 27th overall for well-being.

The index includes more than 2.1 million surveys and measures wellbeing across the following five categories:

• Purpose: Liking what you do each day and being motivated to achieve your goals
• Social: Having supportive relationships and love in your life
• Financial: Managing your economic life to reduce stress and
increase security
• Community: Liking where you live, feeling safe and having pride in your community
• Physical: Having good health and enough energy to get things done daily

Oregon did better in some than others. The state's highest ranking was in the community category, which is no surprise. The lowest ranking, at a dismal 41, was sense of purpose. 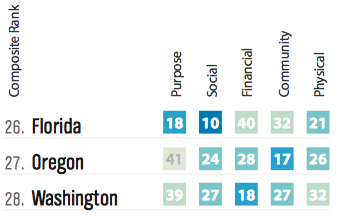 The state with the highest wellbeing index was Alaska, followed by last-year's winner, Hawaii. A number of western states made the top ten, but Washington came in just behind Oregon at 28. At the bottom of the barrel—West Virginia. Here's how Oregon compares to other states.

Why do these numbers matter?

"Researchers, policy makers and healthcare leaders need good information about the well-being of populations that they serve," says David B. Nash MD, MBA, Dean, Jefferson School of Population Health. "Well-being sheds light on the issues that drive quality, cost and productivity. A well-being metric also supports the creation of an action plan for our nation, in order to achieve sustained improvement in the health of our citizens.”

While the index doesn't hone in on Bend specifically, its Oregon report for 2012 and 2013 shows that the 2nd Congressional District (that'd be Rep. Greg Walden's territory) has the lowest wellbeing of all the districts in the state and is more or less in the middle of all districts across the country—219 out of 434 total.

Are you surprised by the results?