"Apocalypse" is a Greek word meaning revelation—an unveiling or unfolding of things not previously known, and which could not be known, apart from the unveiling.

"As a genre, apocalyptic literature details the authors' visions of the end times as revealed by an angel or other heavenly messenger," Wikipedia posits. 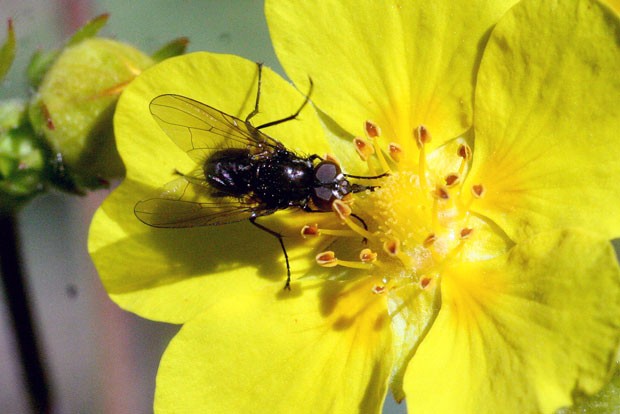 Sorry, good people—I am neither an angel "nor some other heavenly messenger." I'm just an old naturalist and writer who is, at this moment, one very worried old man. And, if what I see going haywire was just in my backyard and something I could take a hand to and turn around, I'd be doing it. But this one has become an apocalypse and could end up being very bad for all of us.

Right at this very moment, insects throughout the world are vanishing. It's true. Right here in Deschutes County, bumble bees are dying out so fast we can't keep up. The only insects holding on are the ones we've been trying to rid ourselves of, but we've pumped them so full of chemicals that were supposed to kill them, most of them are impervious to the stuff we spray into their lives—and ours.

And thanks to all that stuff we've sprayed in our environment, we're responding by having cancer take over our bodies, while the so-called, pest villains just run off and keep right on breeding. The "persistent pesticides" are just that, much to the chagrin of human beings.

Over in Germany and France, city leaders are passing laws to prohibit the use of certain chemicals that cause problems for insects, but cause serious sicknesses for mankind.

Take a look at Netherlands and Switzerland: In 2019, a study by Statistics Netherlands and the Vlinderstichting, Dutch Butterfly Conservation, of butterfly numbers in the Netherlands from 1890 to 2017 reported an estimated decline of 84%. The decline was attributed to changes in land use due to more efficient farming methods, which has caused a decline in weeds (among them milkweed). A report by the Swiss Academy of Natural Sciences in April 2019 reported that 60% of the insects that had been studied in Switzerland were at risk, mostly in farming and aquatic areas; that there had been a 60% decline in insect-eating birds since 1990 in rural areas; and that urgent action was needed to address the causes.

Habitat is another key ingredient to the welfare of insects—and you and me. Right a this very moment there is a road block stopping Monarch butterflies from reaching their northern destination when they leave their wintering habitat (which is also shrinking) in California. The first batch of Monarchs that leave their wintering quarters on the California coast vanished.

No one seems to know what's actually happening to them. However, there's a strong hint linked to the loss of milkweed. Monarch butterflies must find milkweed plants immediately after mating for the females to lay eggs on, as milkweed is the only plant monarch caterpillars can eat. But in that part of California, there ain't none no more!

The water once used to keep milkweed going is now being used to raise high-yield hemp, a very good economic investment for those who own the land. Yes, voices are being raised about the destruction of irrigation sources used to grow milkweed, but now growing hemp, a cash crop. And they're asking:

"In the long run, are dollars more important than butterflies...?"

In addition, millions of bumble bees once pollinating native flowers and trees are no longer with us because they have fallen victim to neonicotinoids, a chemical used to get rid of so-called farm pests.

When the weather warms, Dear Ones, and insects take to the wing, please use your cell phone to photograph the paucity of insects on your windshields. Send them on to me if you like.

Please also scrap any ideas you may have of spraying your grass to keep it green or your garden to rid it of "pests." We've reached a point in our cohabitation with our insects partners that we no longer have the right—or luxury—to spray chemicals to kill them. In the long run we'll just be killing ourselves. If you don't believe me, go to the Xerces Society site (xerces.org) and read what they have to say about our native pollinators.