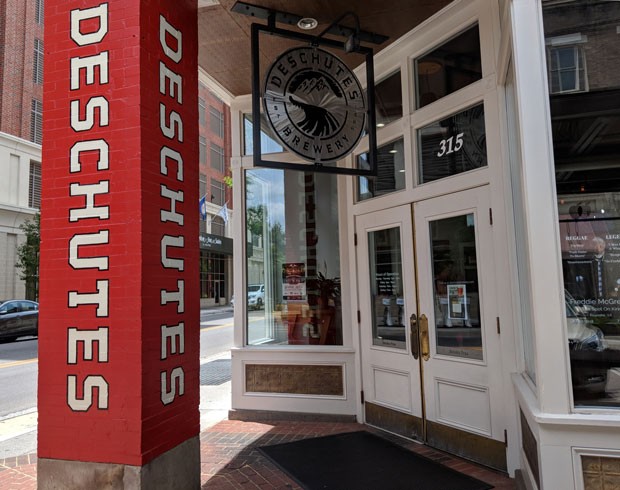 As Deschutes Brewery recently celebrated its 30th anniversary in Bend, there was one beer that no one in town could sample. It was available only in Roanoke, Va., site of Deschutes' eastern foothold.

The Roanoke tasting room isn't quite a year old, but it's already a fixture in Roanoke's burgeoning craft brew scene.

On a hot, humid Virginia afternoon, I visited the air-conditioned tasting room, on a corner a couple of blocks from Roanoke's historic market building. The location has a history of failed eateries. Before Deschutes, it was Thelma's Chicken and Waffles. Before that, it was a restaurant neither as awesome nor as memorable as Thelma's.

Deschutes might have broken the site's curse. That Friday afternoon, a couple dozen people sampled beer, and things would only get busier.

"When all the downtown people get off work, we see an influx," explained Steffon Randolph, pouring beers behind the bar. "Now that it's summer, we get good crowds of visitors just stopping by."

The tasting room delivers a very Bend-like, craftsman-style vibe, slightly askew to the rural South around it. The wooden flight trays were made in Bend. So were the tables, and a wooden arch over the bar mirror. Even the bar top is a solid wood slab, though that particular piece of wood came from an historic elm tree at Roanoke Country Club. 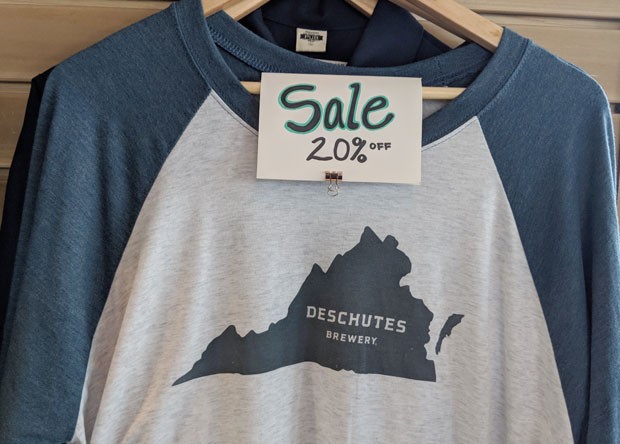 And of course, there's no shortage of Deschutes Brewery-branded merchandise for sale—much of it with a Virginia twist.

Yet no one would confuse the tasting room for its Bend or Portland predecessors. It's a smaller space, and there's no food. All the beer is there more than 20 on tap, including that Roanoke-only beer. Brewer Jeff Schauland gets to make a batch of his own for the tasting room. For the 30th anniversary, it was a refreshing German-style honey ale.

Schauland moved to Roanoke from Central Oregon where he had been a brewer with Silver Moon Brewing. He has nothing but praise for his new home and its beers, though he misses the camaraderie among brewers in Central Oregon.

"Everything is so new here. There's not the brotherhood/sisterhood that there is in Bend," he said, adding that the scene is improving rapidly.

Deschutes cut a deal for hefty state and local incentives to build its own production facility in Roanoke, but in the spring, it announced it was reassessing plans and timing. That didn't stop it from buying 49 acres in Roanoke for $3.2 million for the facility.

Randolph said that a lot of people who visit the Deschutes tasting room have Oregon ties.

One of them is Gabriel Bayley, who grew up in Medford, attended the University of Oregon and eventually moved to Washington, D.C.

He and his family were passing Roanoke on their way to a July 4 holiday in Louisville, Ky. Bayley had planned a short diversion into town to visit the tasting room, even wearing his Deschutes Brewery t-shirt and bringing his growler to fill.

"When I turned 21, the first six-pack I bought was Mirror Pond," he said. "In Oregon, we're spoiled with good beer. Recently the beer in Virginia has gotten a lot better, but some breweries aren't making good beer. The test will be how many last 30 years."