Library series explores democracy and all that it entails

Insulting the president is nothing new in the U.S., and Southern Oregon University Professor Edwin Battistella has done the research to show it.

The country has fostered a raucous environment in this arena "from the get-go," Battistella said.

"At one point, Adams supporters even claimed that Jefferson was dead," Battistella said—something that was more difficult to check up on in those days.

Gerald Ford didn't like people making fun of him for being a klutz, but he also thought it was good for the country to laugh, Battistella said. tweet this

Battistella, who teaches English and linguistics, has written several books, including "Sorry About That: The Language of Public Apology." His next book, "Dangerous Crooked Scoundrels" out next year—"just in time for the election," Battistella noted—will review the ways presidents since George Washington have been insulted. Battistella will hold talks at the Deschutes Public Library Sept. 14 and 15 as part of the library's series, Know Government, running through September.

His talk will review insults from over the centuries and how different presidents responded in different ways. Some stayed quiet but said later that the insults hurt.

"Some are more, 'Right back at you,'" Battistella said.

Herbert Hoover took a lot of hits, but wrote in his memoirs that in all dignity, he couldn't respond, Battistella noted. John F. Kennedy used wit, turning insults back around on those who made them. Gerald Ford didn't like people making fun of him for being a klutz, but he also thought it was good for the country to laugh, Battistella said. Wartime presidents got some extra insults: Franklin Delano Roosevelt was called a traitor to both his class and to communists.

Battistella has noticed some changes over the years—including a shift from the more classical and quasi-religious terms used early on. He has also noticed similarities—comparing presidents to earlier presidents, for instance, or to animals. "Jerk" popped up in the 20th Century. Before that, it was "jackass"—and that term has devolved into a more derogatory one.

"Lots of gender insults over the years," Battistella said, calling that a "consistent theme."

A big difference now comes in the speed and intensity of immediate reactions, compared to the past, when presidents would give speeches and reporters would cover them.

"Now it's much more sort of all the time. Almost part of the environment," Battistella said. He wondered what Andrew Johnson might have done with Twitter and his speeches that called for hanging his political opponents.

At his talk, Battistella plans to give extra attention to presidents in office around the time of Bend's founding, including Teddy Roosevelt—not one to turn the other cheek to insults, he said. That president sued newspaper owner Joseph Pulitzer for libel and lost.

'The living room of the community'

The Library organizes its free monthly programs around central themes, choosing ones that the community is interested in, according to Liz Goodrich, adult programs supervisor at Deschutes Public Library.

One session in the series will explore the rise and fall of democracies. Another will explore anarchy. An especially timely session will review the Electoral College and whether it needs reform. Oregon recently changed its process so that the state's electoral college votes could go to a presidential candidate who wins the most votes nationwide.

It's a priority of the library board to deliver programs that help build the community, engage people and provide the space for people to gather, Goodrich said.

"The living room of the community," she said. "The library is uniquely poised to be that place."

Library Director Todd Dunkelberg called the series a chance to delve deeper into government, a subject that people often don't think much about until they need to vote or pay a tax bill.

"What's a democracy and what's my role in it?" Dunkelberg said, noting that an important part of a democracy is having an informed and involved public.

Kimberly Jensen, professor of history and gender studies at Western Oregon University, will lead a Sept. 6 and Sept. 7 session on women's suffrage in Oregon. Women got the right to vote in Oregon in 1912, eight years before the 19th Amendment that ensured women's right to vote in the U.S. 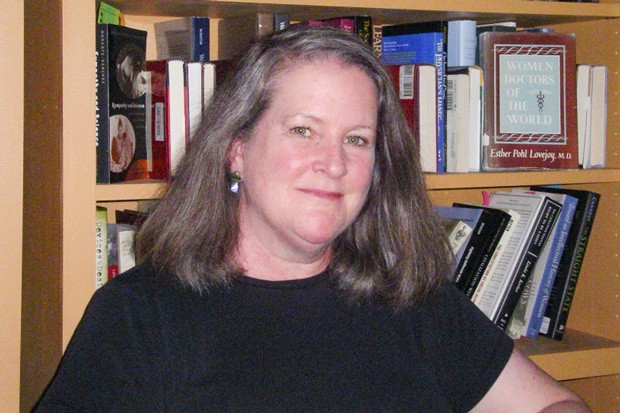 "Oregon's fight was a long one. It took six times on the ballot," Jensen said, noting the ultimate success through grassroots organizing and media efforts. "I think it was a struggle. It took coalition-building, it took a lot of patience in that activism."

Oregon brought the question to male voters more than any other state, Jensen said, noting that the six attempts stretched from the 1870s to 1912.

But simply having the right to vote isn't the same as exercising it—and even the right to vote can still be undermined. Jensen pointed to recent voter suppression efforts and the ways that people who are eligible to vote are prevented and discouraged from doing so.

"Time after time, it's about registering and getting out and doing it," Jensen said.

Oregon women understood the power of the vote and wanted to change their communities for the better, Jensen said.

"Just like we can too," she said of making communities and the nation better by connecting with issues, getting informed and involved and voting.

"I like to think of democracy as less of a noun and more of a verb." - Professor James Foster tweet this

James Foster, professor emeritus at OSU-Cascades, served as chair of the department of political science at OSU's Corvallis campus for a dozen years. With his Sept. 27 session on democracy, the core of the U.S. government, he plans to start a conversation on democracy and what he calls the intractable policy issues that it hasn't been able to coherently address—including climate change, the 2nd Amendment, income inequality and the role of money in politics. For instance, how can a democracy address reasonable controls on gun ownership or the dumping of methane into the atmosphere?

But Foster said what he discusses is less important than what he hopes the people who attend talk about.

"I like to think of democracy as less of a noun and more of a verb," Foster said, calling it organic.

Irresponsible groups, both domestic and foreign, often stir up division and hatred through social media, Foster noted. He stressed the importance of regularly holding conversations and gatherings that focus on issues and democracy—and of finding common ground on issues, such as climate change.

"We all live on this small blue green planet and the future of all of us is tied up in taking care" of it, Foster said.

"It's the differences that enrich the conversation," Foster said.

He wants to see a wide cross-section of Deschutes County attend—representing the mix of people who use the Deschutes Public Library itself. That includes those who are skeptical but have not succumbed to cynicism; who have "passionate views and articulate arguments" and still remain open-minded, Foster said.

The library gathering, "we hope, will be itself an exercise in democracy," Foster said.