It's no secret that having an adequate supply of workforce housing is an issue in Central Oregon. When a city such as Bend lacks a sufficient amount of low- to middle-income housing, the economy can suffer. Business owners in the service and hospitality industries can attest: It's tough to find and retain quality employees when they can't afford to live here. It's a problem that government entities have attempted to attack from a number of angles. 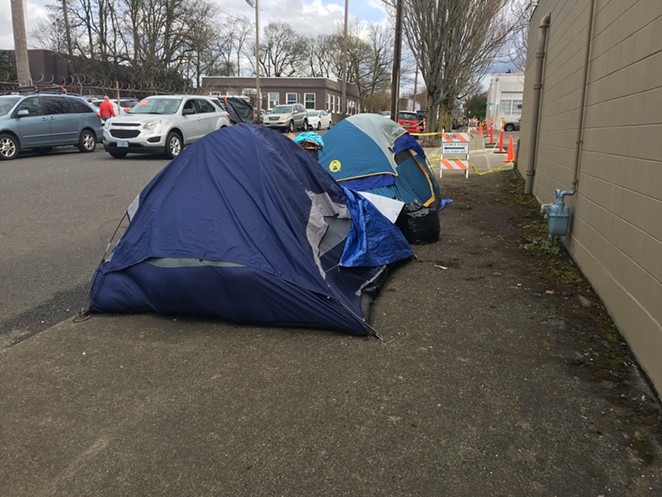 A proposal brewing in Multnomah County may offer local officials yet another angle with which to attack the way a lack of affordable housing contributes negatively to economic growth in our area. As reported in Willamette Week last week, officials there are floating a proposal to direct some of the tourism promotion dollars that flow into Travel Portland—the area's version of Visit Bend—toward the area's Joint Office of Homeless Services.

According to the Dec. 12 story, "For the past 17 years, a 2.5 percent tax on rental cars and hotel rooms in the county has been used to fund an expansion of the Oregon Convention Center, to finance a Convention Center hotel, and to provide marketing dollars to Travel Portland, the nonprofit whose job it is to attract tourists." As of Dec. 12, the story detailed, the City of Portland, Multomah County and Metro were close to settling a deal on the alternative use of the funds.

As the story continued, "While most of the spending in the agreement is viewed as traditional uses of the lodging tax, (Multnomah County Chair Debra) Kafoury has been particularly interested in the unconventional use of the funds to increase spending on homelessness, arguing that it should be a concern for people in the tourism industry." Hoteliers in Portland routinely complain of "bad street behavior" outside their establishments, the story stated—so putting funds toward supporting the homeless population could help alleviate some of the hoteliers' concerns.

The notion of an "unconventional use of the funds" is a notion that should be of significance to anyone concerned with the state of the tourism industry in our area. Indeed, homelessness is an issue in Central Oregon, too. But without adequate workforce housing, attracting and retaining workers will continue to plague the tourism industry here.

The City of Bend collects 10.4 percent in transient room taxes from hotels and vacation rentals. While there's a more granular breakdown in that 10.4 percent and where it goes, it's sufficient here to know that of the TRT collected, "Thirty-one and one-fifth percent of total room tax revenues will be used for tourism promotion," according to City of Bend code 12.05. "Tourism promotion" also includes "tourism-related facilities."

It's in that last part—the "tourism-related facilities"—where we see potential. If Portland's proposal to funnel some funds toward homelessness goes forward, it would stand to reason that a creative interpretation of tourism promotion funds could fly here, too.

Naturally, any proposal of this sort would require significant buy-in from the entities involved in collecting, allocating and spending tourism tax dollars. The City of Bend and Visit Bend—the entity tasked with spending tourism promotion dollars—would need to seek support from the Oregon Restaurant & Lodging Association, for one. The fact that ORLA filed suit against the City of Bend last year, alleging that the City's diversion of some room tax revenues away from tourism promotion and toward the general fund, in alleged violation of state law, is proof that the Association is a formidable watchdog of the way tourism funds are used.

Studies have shown that neglecting to promote a tourism destination can mean a reduction in revenues for the location in question—so this is not to say that all funds should be used creatively. Still, one way to bolster a sector of the economy—in this case, the lower-income service workforce—could be through building workforce housing with tourism dollars. We'll be watching Portland's efforts with interest, to see whether creative interpretations can actually fly.