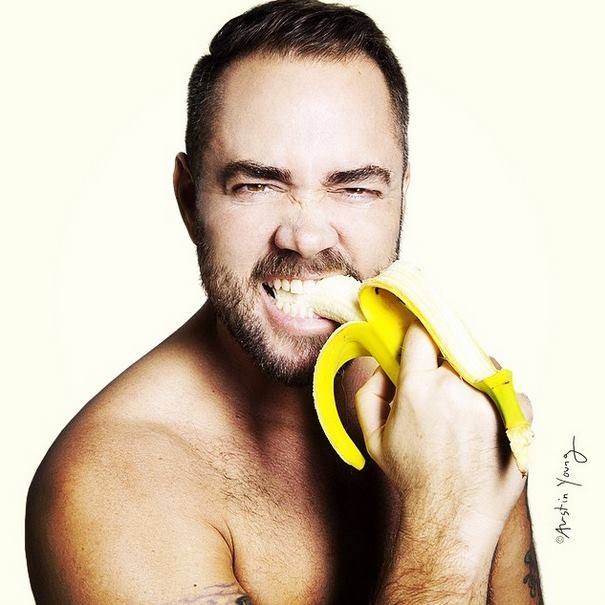 We chatted with Harvie about his path to comedy and acting in advance of his show tonight at Volcanic Theatre Pub. Here's the full interview.

Source Weekly: How did you get started in comedy?

Ian Harvie: I was in Portland, Maine, working as a web developer and received a postcard in the mail, quite randomly, about a standup comedy writing workshop that was being held at the local comedy club on their dark nights, and hosted by one of the writers from "The Daily Show." From the time I was little I loved to entertain people. It struck me like a bolt of lightening, when I hit the stage my first time after taking that writing class, that comedy was my art medium. I was hooked from day one even in the writing class, but performing it was what cemented it for me.

SW: How did you end up getting involved in “Transparent”?

IH: A trans guy friend of mine was helping the Jill Soloway, the show creator, with casting trans people in trans roles. I was asked to do background work at first, but later was asked to the writers room by Jill to share my story, and after that she told me about the story arc between a trans guy character (Dale) and the youngest Pfefferman daughter (Ali). After spending the day in the writers' room, Jill asked me if I would be interested in playing Dale. She brought Amazon executives and show producers to one of my standup shows, and had me work with her writers and some of the cast in an acting workshop before I was officially offered the part. When she called to tell me, I thanked her and said, "I won't let you down." She quickly said back, "No, I won't let you down." I knew I was about to embark on something really beautiful and revolutionary in art making. I just didn't know at the time just how far the reach would be and how moving to so many others outside the trans community it would be.

SW: How has being a first-time TV actor compared to your “regular” gig as a stand-up comedian? Do you see yourself doing more acting in the future?

IH: It was so similar in that I am simply hooked and chasing it the same way I was with doing standup when I first started. It opened up a new part of me again. I always love finding parts of me that I wondered if it existed, and to have that confirmation that I am also that kind of artist too is really fun. I love how just when you think you might have plateaued or settled somewhere, there is another cracking open waiting for you if you want it. I was cracked open as an artist with standup, which led me to acting, and now that has led me to another cracking open with writing. I just wrote a TV pilot loosely based on my life as a trans man. Keep you posted on what happens with that.

SW: It seems like you’ve had your fair share of lucky breaks—opening for Margaret Cho, making your acting debut on a Golden Globe-winning TV show—what’s your secret?

IH: I have so many wonderful breaks, yes, I agree. My secret is largely "The Secret." I have vision of what I would like my life to be like—the kinds of things I want to do, create, be engaged in, the relationships I want to cultivate—and I almost never let negative language come out of my mouth about any of it and if I do it's usually brief and I correct myself. That is a choice I make; usually it's a daily choice. I am also in recovery, been sober for 22 years and I think that has a lot to do with my frame of mind. I credit my recovery with giving me a clear heart and mind and the ability to dream and also the ability to take action on my own behalf to make those dreams real. Picking up and moving from Maine to L.A., becoming a touring comic, an actor, writing a script, all of those things I had a clear vision of inside me and I had to make efforts to make them happen. When things I want don't happen, I just move on and pick the next dream to focus on. I want to be pushing the right boulder and it shouldn't feel like work, it should feel like love.

SW: Obviously, you take on some topics in your comedy that might make audience members uncomfortable. What subjects or types of jokes cross your own personal boundaries?

SW: On the flip side, how can comedy help break the ice and build understanding?

IH: People often think that because you are laughing that it's somehow not intimate, but I think it's one of the most vulnerable things we can do with each other. The moment after we share a laugh, our shoulders lower, our guard goes down. So when you combine that kind of disarmament with funny and education or human storytelling, you can be truly seen, heard and connect with people over shared experience. And even if they can't relate, there is connection over a simple human laugh.

SW: People like to use the retort, “It’s just a joke!” to excuse comments that others find offensive. As a comedian, when do you think that’s called for, and how does the overuse of that sentiment belittle both people’s legitimate concerns and the art of comedy?

IH: I believe in freedom of speech, no matter what, in all forms of art and discourse. I may not agree with it or even despise it, think it's not funny—as people might find with some of my jokes. But I also don't think its useful to intentionally shame people because we are hurt or angered by someone's poor writing/material. If they are a decent comic, they will be listening to the audience response the moment they hit their punchline, and know if it's working or not. I think it's okay to have a dialog about that joke and what it made us think of with each other and the comic who wrote and delivered it. But I think the dialog stops the moment we intentionally shame people. I think it's better to ask questions of the person who wrote it, like, "Why did you think that, or where did that come from for you?" And being a comic is kind of like being a songwriter, they are not all going to be hits. In fact, I think it's harder for comics, because about 1 in 10 of our jokes—if that—are keepers. It's a tough business to be in and stay fresh, sometimes we might mistakenly reach into places that we have no business in, but we do and sometimes it's exposed and sometimes it's not. It's art and art is subjective and one size does not fit all, nor should it ever strive to.

SW: You’re very open about your life and your identity. Have you ever wished you could put that cat back in the bag?

SW: Have you been to Bend before? If so, what do you like best about it? If not, what’s your impression of the city?

IH: I was driving from Boise to San Francisco once and got really lost. This was before GPS and it was the middle of the night. I remember it was small and cute, but that's it. I'm anxious to see what it's really like. I know a few folks there that just rave about what a great little artist community it is there.

SW: What kind of experiences have you had performing in cities that have conservative leanings?

IH: I've had only great experiences and I think it's because I only am sharing my own story, in a funny way, and my story is inarguable. People can't say, "No, that isn't your story, that's not your experience." I think that makes for good trips, even to the red states.

As for me, I have visions, specific ones, that I prefer to keep close just for me or sometimes I share with my partner. I just want to keep fresh and living in the questions, enjoying the questions, until I find a few answers. Simply participate in my life and say yes to nearly everything. I will keep writing jokes and scripts, performing standup, acting, learning more about the craft, furthering my life education with it and do more creatively. I love to be regularly working on the road, traveling and performing, everywhere, always—that too would be inspiring to my various arts, because you have nothing to write about if you never go anywhere and I want lots more experience to draw from.

SW: If you weren’t a comedian (or actor), what other career could you see yourself having?