Into the Weird | Outside Features | Bend | The Source Weekly - Bend, Oregon

Searching for UFOs, Sasquatch and other mysteries in Central Oregon 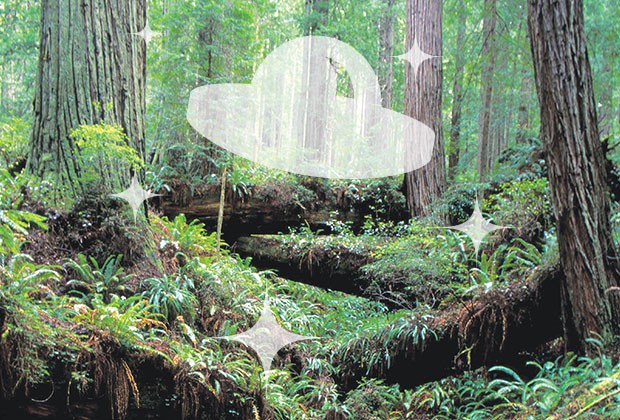 If you're open-minded, enjoy a good story and like to embark on adventures, you may find a lifetime of mysteries in which to pursue, right out your front door.

Strange sounds emanate from the deep forest. Giant footprints lie in the mud. No other topic evokes such spirited discussion than Bigfoot—also known as Sasquatch, Skookum and Skunk Ape, and often debunked and criticized as a publicity stunt or world-class hoax. The story of Bigfoot has deep roots in the Pacific Northwest. Native Americans have told stories of a foul smelling, giant, human-like, hairy beast, standing 7 to 9 feet tall, for centuries. Roger Patterson and Bob Gilman captured the most famous image of the creature in 1963 while exploring the forests of Northern California.

There's a long history of sightings in the Cascade Mountain range, including Suttle Lake, Mt. Bachelor, the La Pine area and both the Deschutes and Ochoco National Forests, says Bigfoot Field Research Organization researcher and Expedition Leader, Cindy Caddell. The heavily forested area between Mt. Hood and Mt. Jefferson is known as the Oregon Bigfoot Highway.

"What I find compelling are the people I interview who say they have seen something they can't explain. In addition, modern accounts are very similar to the oral traditions of Native Americans." Her degree in anthropology and associated research, which includes work with Survivorman Les Stroud, has led to seeing connections between these cross-cultural experiences. "These have led me to believe there is something out there that warrants further investigation," she says.

"Anyone can look for evidence of Bigfoot. Several groups and organizations have regular outings (combined with) conventions, conferences, and speaking events where you can meet other people interested in this subject," she says. The BFRO and the Olympic Project are two of the most respected and popular organizations on the topic.

Among all the paranormal phenomenon, the most widely believed is that spirits of the dead sometimes remain in the mortal realm. From the Bible to Shakespeare's "Macbeth," stories of phantoms are widespread.

For decades, owners of, and visitor to, many of Bend's oldest buildings have claimed to see strange images and hear unexplained noises. Megan Tormey, manager at Lara House Bed and Breakfast, says guests have reported stories of an old innkeeper that becomes visible around the house. Built in 1910, Lara House has its fair share of creaky steps and paper-thin walls, and "several ghost hunting guests (continue to) stay with us," she says. "I do love a good ghost story."

Staff at The Commons Cafe, housed in Bend's oldest home, the Goodwillie, or Allen-Rademacher House, built in 1904, say something routinely walks up and down the stairs. Sometimes it runs. (Disclosure: I work at the adjoining Crow's Feet Commons bike/ski shop.)

In addition, many people have reported the sound of children running down the halls at St. Francis School. Stories of spirits originating from the O'Kane Building in downtown Bend are well known.

Fire in the Sky

Gaze upon the night sky and ponder the magnificence (or significance) of the expanse. Viewing celestial bodies from our terrestrial world is an avocation that embodies what it means to be human. There are literally billions of galaxies in the observable universe beyond our own Milky Way. These "island universes," as they are often referred, statistically should hold the keys to life outside of our little blue planet.


"What I find compelling are the people I interview who say they have seen something they can't explain." —Cindy Caddell tweet this

A private pilot flying over the Cascade Mountains in 1947 reported seeing a group of "flying disks," ushering in the notion of beings from another planet visiting Earth. From science fiction and pop culture, to governmental coverups and conspiracy theories, the number of unexplained experiences happening to seemingly normal people is astounding.

"Many people report what they think are UFOs because they aren't able to identify what they have seen or photographed," says Tom Bowden, Oregon State Director of Mutual UFO Network. "Often, an investigator is able to explain these incidents as misidentifications of known objects or phenomena. The remainder, generally about 10 to 20 percent of reports, remain unexplained," he says.

Sightings from pilots, trained military observers and your next-door neighbor have fueled the debate. "This is a deeply complex subject with a rich history, and people who have not studied it often have misconceptions," says Bowden. "UFOs are real, but we cannot prove that they are alien spacecraft. Don't get drawn into far-out belief systems. Learn about UFOs from solid resources such as good books by experts in the field." (see OregonMUFON.com).