Invasion of the Ants

Well, our move to Eugene has opened up a new challenge for us: an invasion of tiny ants. And, oh boy, have they moved in!

There are nearly 1,000 species of ants in North America. They range in size from tiny specks to as big as a AAA battery. And they're ubiquitous—they're everywhere! 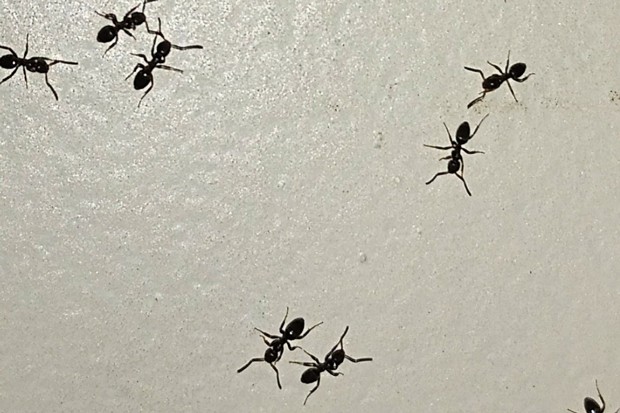 My wife Sue is having more fun trying to outsmart them—just as challenging as keeping squirrels out of the bird feeder.

First she used peppermint oil along their route to block their scent trail.

"That should do it," she said, having confidence that the strong peppermint oil would send them back home.

Nope, that didn't work, they just went around it. We had completely underestimated the reasoning ability of the ant's tiny brain. I can hear them talking it over: "Hey guys, just hold your noses and we can go around it. Our scouts have discovered a lot of rich goodies in this place, and it'll be well worth the extra work to harvest it."

And they kept coming. Pretty soon we could make out a marching ant trail of them coming and going on the kitchen counter. They found a tiny hole in the framing around the kitchen window and lo-and-behold they started arriving by the hundreds.

A continuous black line of them was coming from the edge of the window, across the kitchen counter, up on the white wall under the microwave, to the other side of the kitchen, down that wall and up the side of the tall plastic garbage can.

Ants being ants, they soon found a new way to get to the food source by coming and going through a tiny hole in the ceiling where it meets the kitchen wall. We wondered how many thousands more were inside the walls waiting to hear from their friends. tweet this

I have a hunch the ants thought they'd died and gone to heaven. And of course, Sue started using more oil to mask the ant's foraging trail. Yeah, you guessed it, we are not into using pesticides, poisons or harmful chemicals!

It stalled them, and we thought we had won the battle. But, ants being ants, they soon found a new way to get to the food source by coming and going through a tiny hole in the ceiling where it meets the kitchen wall. We wondered how many thousands more were inside the walls waiting to hear from their friends.

We moved the garbage can to the garage and, again, we thought we had solved the ant problem. Hah!

Two days passed since we discovered that our home had become an ant restaurant. Moving the big food source seemed an obvious solution to the invasion. But when Sue opened the cupboard the next morning, she discovered a number of the sneaky little black guys congregating around the lid of the honey jar. And then, when we opened up the bag of my chief digestive aids, prunes, a bunch of ants slid out with them. You have to give them credit!

Now that the ants were searching for a new way to get to a food source, Sue, while watching them go hither and thither, mused, "Just think what it must be like to live in the tropics."

She finally took some mint-scented toothpaste and, since we have white walls, spread it all around the window frame and into any and all cracks where those little busybodies could find an entrance.

In addition, she has cleaned every surface with vinegar water and so far, fingers crossed, we have kept these intrepid insects at bay. Ain't Nature grand!