Is Anyone Enforcing This? | The Source Weekly - Bend, Oregon

Is Anyone Enforcing This?

Over the last week, local, state and county officials have hosted a slew of virtual press meetings to announce the news that most of Oregon is reopening... albeit with caution.

At every level of government, curious reporters have asked the same questions: Who is enforcing the new guidelines? Will people violating the non-essential travel ban face repercussions? 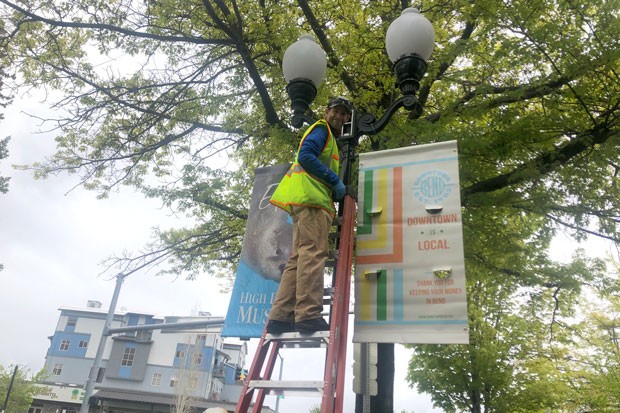 Will scofflaws get arrested?

"The Governor's order is enforceable by law enforcement, however, agencies in Central Oregon have reported they are primarily focused on education and outreach about current regulations and would use arrests as a last resort," read a press release sent Monday by the Central Oregon Emergency Information Network. (See the end of this article for a variety of numbers to call to report violations or ask questions.)

"We will continue to follow the guidance from the Governor's Office by focusing on education and voluntary compliance," said Deschutes County Sheriff Shane Nelson in an email to the Source. "If a situation, or someone, is putting other's safety at risk, we will take enforcement action if we don't gain voluntary compliance."

Lt. Juli McConkey of the Bend Police Department echoed that sentiment: "Our plan is to educate and if we need to, we can send a report to the district attorney and they can determine if they are going to file charges. The last resort would be making an arrest," McConkey told the Source. "We have a lot more important things to do and [need to] respond to 911 calls."

“That is not the culture we’re trying to set up right now…. Every citizen is going to have to take some personal responsibility, being out in the community, wearing a mask, understanding that this is an unknown generational health emergency that we’re living in in this time.” -Deschutes County Commissioner Tony DeBone tweet this

And what does District Attorney John Hummel plan to do with any citations he might see?

Hummel said the majority of the community has demonstrated care for "their neighbors" to comply so far, and most people in Deschutes County respect the law, he told the Source.

"The few who fail to come into compliance after being asked by law enforcement to do so should be issued citations," Hummel said. "I stand ready to prosecute offenders identified by local law enforcement officers."

During a May 8 virtual press conference of city and county leaders, Deschutes County Commissioner Tony DeBone said, "[The main goal] is education.... If we're in a situation where things are getting out of control, then there is a discussion about what enforcement works, right? [But] that is not the culture we're trying to set up right now.... Every citizen is going to have to take some personal responsibility, being out in the community, wearing a mask, understanding that this is an unknown generational health emergency that we're living in in this time." 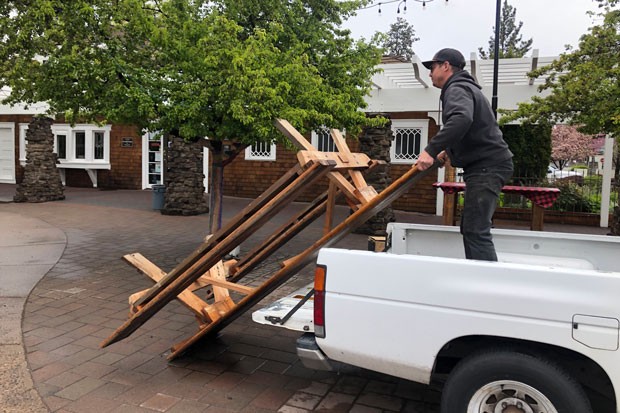 The Source interviewed Redmond City Manager Keith Witcosky for the “Bend Don’t Break” podcast last month and asked him about enforcement. In light of the 200+ person anti-lockdown protests at Redmond City Hall, and the news that some businesses were beginning to operate illegally, did Redmond have a plan in place to crack down on stay-home order violations?

“If something was occurring that was not supposed to be occurring… An officer would go and have a discussion with them and draft report that would go both to the to the District Attorney and [the Oregon Occupational Safety and Health Administration] at the State level,” Witcosky said. “OSHA would take a look at it, determine whether there were any fines, and then it would shift to the regulatory part of the State that would determine if there were any licenses revoked or suspended. Our role is reporting; we could issue fines… but at this point we would take a report and push it up through other jurisdictions.”

Will the state intervene once notified of violations?

“I’ve been very, very clear, I know that there are businesses around the state, a few outliers, continuing to do business in violation of the executive order,” said Gov. Kate Brown on May 14. “That does not reflect the majority of business owners and businesses across the state. For those outliers, we are taking action. Agencies have the ability to issue fines and they will move forward.”


After the governor loosened restrictions on 29 Oregon counties last week, many people wanted to know how Phase One will affect the state's non-essential travel ban. The Oregon Health Authority Reopening Guidance from May 16 states: "Stay close to home. Avoid overnight trips and minimize other non-essential travel, including recreational day trips to destinations outside the community where you live."

When Brown announced limited opening of state recreational areas on May 5, she said that nobody should travel more than 50 miles for outdoor recreation.

In tourism communities like Central Oregon and the Oregon Coast, some people worry the reopening announcement may inspire a flood of visitors. Clackamas, Washington and Multnomah counties—which are part of the Greater Portland region—are still on lockdown. What's to stop people in the city from escaping to the mountains?

"Stay close to home. Avoid overnight trips and minimize other non-essential travel, including recreational day trips to destinations outside the community where you live.-Oregon Health Authority Reopening Guidance tweet this

"This is up to all of us," Brown said. "Public law enforcement has really important things to do. I'm not going to be asking them to stop cars that are going to the Coast. I'm asking, I'm encouraging Oregonians to be thoughtful and considerate of others."

Dr. Dean Sidelinger, the state's epidemiologist, said on Thursday that most people have stayed home through lockdown; therefore, he doesn't expect a huge spike in recreational travel. Traffic data and aggregated cell phone data demonstrated Oregonians were complying, he said.

Neither Deschutes County or the City of Bend want local tourism agencies or companies to push out any marketing messages promoting travel to Central Oregon right now. Yet, the county's temporary ban on short-term rentals expired May 15. The Bend City Council renewed its advisory against recreational travel on May 6, but there's no way to enforce it, and it may only remain in effect for another three weeks.

"Although we've allowed our prohibitions against overnight rentals or short-term rentals to lapse, we are not trying to encourage travel from other parts of the area currently," said Henderson on May 13. "But we do need to have travel and the tourism, so that's going to be a coming thing and we're very supportive of that as it can grow."

Across the state, county and local level, tourism guidelines are open to interpretation.

Visit Bend's recent post, "4 ways not to mess this up as Bend reopens for business," clearly states that locals need to remind out-of-town friends to stay home.

Meanwhile, some local properties went all in with Phase One.

On Friday afternoon, the first day Deschutes County had officially entered Phase One, Sunriver Resort sent out an email at 4pm with the headline, "We're open & ready to welcome you," offering dirt cheap home and condo rentals (from $89 a night) and "third night free" deals. The email came with links to the resort's new health and sanitation practices.

Does Sunriver Resort have an ethical obligation to hold off on marketing while the travel ban is still in effect?

"I would argue that [Sunriver Resort] showed the most responsibility of everyone," said Tom O'Shea, managing director for the resort. "We closed first, perhaps first in the state. We closed voluntarily for eight weeks; it was not mandated by the governor to close. We took that time to re-evaluate our operations, and take care of our community, employees and provide a safe environment for our guests and we have done that. Our reopening has nothing to do with Phase One."

The Source will report updated occupancy rates comparing the first weekend of Phase One to weekends during lockdown later this week at bendsource.com.

Commissioner DeBone summed up the confusion over enforcement: "There's a difference between recommendations and regulations, and we're at the regulations phase right now; these are all recommendations to be safe in our community."

Any violation in Deschutes County: 541-693-6911 or CountyEnvironmentalHealth@deschutes.org.