Is the Flask Empty?

Whereas we pose the question: Does Larry and His Flask still exist?

For those counting, the last time local stars Larry and His Flask played together was a year ago this month. Typical for this high energy, self-styled "Post-Americana" rock band, the "This Remedy West Coast Tour" included 14 shows in five western states over the span of about two weeks. 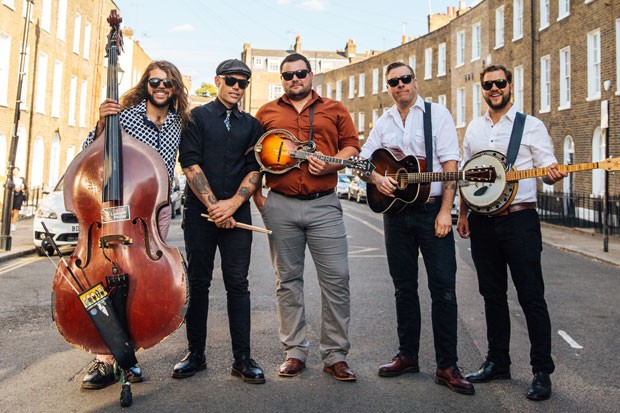 With a year passing since then, I had to ask, does the group still exist?

But since that tour, the band hasn't played together and reports no plans for future gigs. So why does a band that has recorded seven full-length albums and two EPs, and has toured all over the world with bands like the Dropkick Murphys, simply stop playing?

It's complicated—but hang with me.

With roots in Redmond, the band was formed in 2003 as a three-piece punk rock band with Greg Johnson. "Larry and his Flask" is a fictional character created by band member Jamin Marshall in 2003.

Over the subsequent 17 years, the band evolved. The number of members reached a high of 11 in 2008, and the sound changed over time. According to the LAHF website, the band spent "its first half-decade stuck in a primordial, punk-rock goop where the goal was always party over perfection."

Conspicuously absent was the band's co-founder, drummer and first lead vocalist, Jamin Marshall, who permanently left the band in 2018.

"He just needed a change in his life, the road stopped appealing to him—which it did to most everybody in the band," said Jeshua (Jesse) Marshall, Jamin's brother and co-founder.

"No matter how successful a band becomes, sometimes the grind of the road can become too much," wrote Herstand.

This could certainly apply to LAHF.

"So many incredible shows and tours, so many that they blend together," Jeshua Marshall reflected. "The Vans Warped Tour in 2011, opening for Dropkick Murphys on a six-week tour of the U.S., relentlessly touring North America and Europe. I loved almost all of it, to be honest."

In addition, the financial challenges of self-managing a band and the pressures of family back home all contributed to the current situation.

Carew also spoke to the other obvious factor. "Back in 2008, we were all in our 20s and ready to drop everything. Now everyone's in their 30s, have families and careers."

"We pretty much relied on Ian as the main songwriter, singer and front man. You can't do a show without him. And being a father and husband and having new twin boys, he's focusing on that now," said Carew.

The other band members are focused elsewhere as well. Kirk Skatvold works at Tokyo Starfish, a Bend dispensary. Jeshua Marshall continues to be very involved in the Bend music scene.

"Music is my life. I'm currently working on my debut solo album with Todd Rosenburg of Mad Caddies who is producing and drumming on the record," he said. Marshall also plans to tour in Europe this summer with an Austin-based band.

Carew works in the building industry and continues his musical passions, forming a local band called "Andy Carew and his You Can Toos," playing old jazz-swing standards.

But international touring aside, have we seen the last of local shows featuring Larry and His Flask?

Jeshua Marshall leaves the door cracked open. "Best answer I can give is a definite maybe. Under the right circumstances it would be a blast to get it moving again but... I'm happy if we leave it as an incredible 16-plus-year adventure with my brothers and best friends."

Adds Carew, "Don't lose hope, because it's not impossible that we might play again."