It Was Beer Before Liquor | The Source Weekly - Bend, Oregon

It Was Beer Before Liquor

While whiskey is essentially a distillate of beer, the primary difference in the contents of your last glass of beer and what goes into whiskey is hops. You have to search high and low to find a hopped whiskey—but otherwise, the mash used for each is quite similar.

In the case of Black Butte Whiskey, an annual collaborative offering between Bendistillery and Deschutes Brewing since 2015, the same malted barley that's responsible for the United States' best-selling porter is precisely what Deschutes uses to make the beer (more accurately, the "wash") for the whiskey counterpart. This year, on Nov. 25, in addition to the usual version of Black Butte Whiskey that clocks in at 94 proof (imagine if they made a 47 percent ABV Black Butte!), the two brands are for the first time offering a cask-strength version that comes out of the barrel at 125.8 proof. 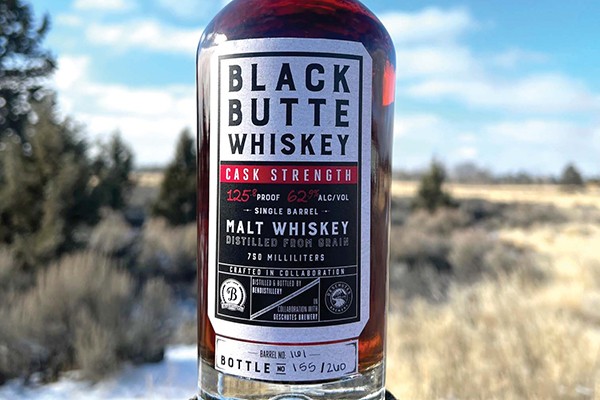 I say barrel, singular, because it's truly a single-barrel project, so bottles—or drams—are extremely limited.

Both releases will be available for sampling Friday at Bendistillery's Crater Lake Spirits tasting room adjacent to the Deschutes Brewpub on Bond Street. The non-cask strength version will also be sampled at the brewpub while drams can be purchased from the bar, which will have a special Black Butte Friday menu to complement the whiskey.

Bendistillery President Alan Dietrich says, "The core audience[s] for Black Butte Whiskey are whiskey fans but also beer drinkers. They're getting a two-fer in a product like this. Most new American whiskey drinkers started with beer and never completely left that world, so this has a through-line with those two loves."

Indeed, I fell in love with bourbon after falling in love with bourbon-aged beers. Given bourbon's raging popularity, the natural next step is to explore the wider world of whiskey moving from corn-based bourbons to rye-based rye whiskeys and then circling back to malted barley via Scotch whiskies. Crater Lake Spirits predominantly makes 100% rye whiskeys but also does a limited run barley single malt.

Surprisingly few breweries have made the foray into collaboration whiskeys as brand-extensions of flagship beers. Notably, Rogue Ales and Spirits makes Dead Guy Whiskey and Silver Moon Brewing had turned its Dark Side Stout into a whiskey courtesy of Bendistillery. Deschutes CEO Peter Skrbek says a still of its own is, prospectively, the next step.

Dietrich says Bendistillery's retired founder, Jim Bendis, conducted beer-into-whiskey experiments back in the '90s that laid the groundwork for Black Butte Whiskey over pints at the Deschutes pub several years back. The debut release saw lines around the block, which is why the duo now produce enough for about 10 barrels' worth (of the regular strength) each year now.

"Bud Light and Pliny the Elder are both 'beer' but they're a world apart. Whiskey has become like beer and the renaissance has opened people's palates," says Dietrich.

Adds Skrbek, "I'm a whiskey nerd, personally, so it's exciting merging the brewer's art and the distiller's art rather than carrying dogma from one or the other. (Black Butte Whiskey) is American malt whiskey in a way the world doesn't know yet; it's a new frontier."

Both Dietrich and Skrbek enjoy their Black Butte Whiskey with just a few drops of water. (To ensure it doesn't get too watered down, Dietrich uses freezable whiskey rocks instead of ice in his normal-strength drams.) Just as the Scottish would never use their single-malts in a cocktail, Oregonians are advised, in Dietrich's words, "This is a sipping whiskey."

"The inspiration, from my side," says Skrbek, "has been integrating elements of the bourbon world around the barrel-proof side of getting interesting and complex distillates that do so much aromatically, and on the palate."

He explains that unlike most distillers' washes, Deschutes' wash employs "clean fermentation." It undergoes the same time-honored fermentation process as beer instead of an expedited version using distiller's yeast. In fact, Deschutes pitches a second dose of yeast to raise the ABV from Black Butte Porter's usual 5.5% to well over 10%. At a rate of roughly 10 to one, distillation takes 4,000 gallons of beer resulting in about 400 gallons of 63% ABV whiskey.

The whiskey has notes of spicy cinnamon, baking spices and whiskey's tell-tale leather. Flavors that carry through from the base porter include chocolate and caramel as well as fresh-baked brown bread.

Related Whiskeyed Away: News and trends in local whiskey

Whiskeyed Away
News and trends in local whiskey
If there was any time better than the middle of winter to revel in the craft of whiskey, we don't know when it is.
By Nicole Vulcan
Beer & Drink