Four chances to see seven winners on one ticket 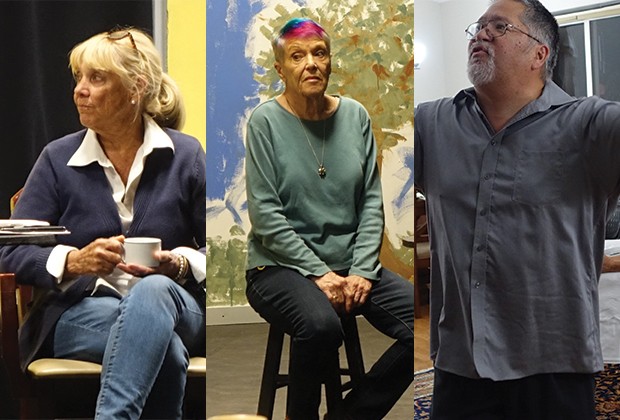 The results are in: Out of more than 100 submissions from playwrights across the U.S., seven best works have been chosen for the Cascades Theatrical Company's second annual "Cascades 10!" festival of short plays. I had the chance to watch rehearsals for two of the shows, and I have to say they were rich.

The "10" stands for the 10 minutes – give or take – that each playwright was given in which to create a story. The winning works are alternately funny, profound or surprising. "Sometimes these 10-minute play festivals have skits in them. They don't really have any depth in them," says CTC board president Richard Choate, who made the final selections. "These plays tend to have an ostensive action, what the play seems to be about, and a subliminal action, what the play is actually about, which meets at the end for a perception shift. They're not all dramatic – some of them are light and some funny – but they all have some solidity to them."

John Giambalvo, last seen on the stage as jailer Ralph in "Under a Red Moon" at 2nd Street Theater, directs "Old Birds," an encouraging piece by Jon Head about renewal in the later years.

"I had three choices. One was about an airplane flight and one about an environmentalist who wants to save a little squirrel where the Marines have their training. They don't want the tanks to roll over it," Giambalvo shares. "I liked the title, 'Old Birds.' This is one of the better ones. It's a philosophical play about not letting your age stop you from what you want to do." Julie Grey and Jane Williamson play two friends who go out for coffee and happen to meet a nonagenarian (Sandy Silver as Ella) with a boldly youthful spirit.

In "Two People," by Mark Saunders, a husband and wife find themselves unhappily reunited in the afterlife. "We (directors) got to say, 'here are my top three choices.' The one we're doing was my number one choice," says director Debbie Levin. "They're not quite sure that they really want to be there. It's boring. It's not really 'Heaven.' They have ham for breakfast, lunch and dinner." After an extended time of fruitless complaining, the pair discovers that a little honesty goes a long way with the Big Guy. Kathryn Galan and Thomas Tsuneta play the married couple.

CTC received over 100 submissions for the festival, though not all of them came from the Pacific Northwest, as was part of the criteria. Though all of the chosen playwrights are from the PNW area, one is particularly close to home. Of "Prognosticator," directed by Stephanie Crepo, playwright Ron McCracken says the rapid population growth in Bend since the time he moved here in 1999 inspired his opening dialog.

Other titles in the C-10 lineup include "Of Mice and Marines" by John Yunker, directed by Wilma Keller; "Life Changing Email" by John C. Davenport, directed by Michael Coffman; "A Different Landscape" by Barbara Lindsay, directed by Audrey Rink; and "17B" by Stephan Feldman, directed by Robert Flanagan. All seven plays will be shown at each of the four performances.