Kerry Sheehan is a TikTok sensation with a ski obsession

Shero definition, via Webster's Dictionary: A woman admired or idealized for her courage, outstanding achievements, or noble qualities; a heroine.

Faster than a speeding bullet, more powerful than a locomotive, able to leap tall buildings in a single bound, Kerry Sheehan, Mt. Bachelor ski instructor and nanny, has seen exponential progress in her Woodward park skills this season. Skiing at Willamette Pass since the age of three, at 26 she's just begun learning boxes, rails, 360s and flips —now with 23,000 followers tracking her gains on TikTok. 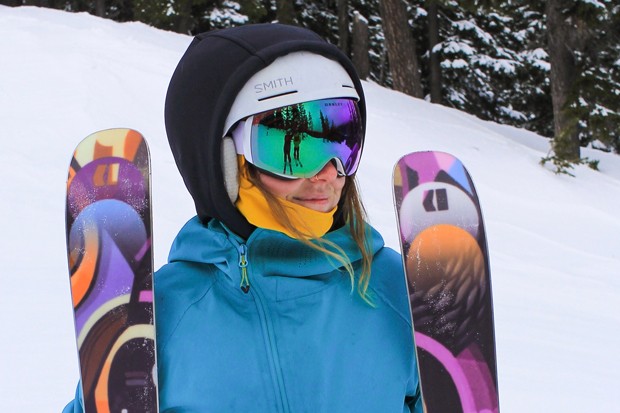 "It was a slow build over time with followers, and apparently people really like watching me progress in the park—those videos do really well," she said. "Recently I reached 5,000 followers which was a milestone, and then I ended up having a video of one of the ski patrol dogs go viral overnight and I woke up to 23,000 followers. It has been wild trying to navigate what to do now."

Some may ask, why learn park at 26? Originally scared away at 16 by a mansplainer and concussion, Sheehan shares, "This year something clicked in my brain that I needed to do a 360 off of drops—but as I got in the park to practice and started learning more tricks and different styles of skiing, I started to really like it. Now I love taking park laps!" Though her freestyle park vids maybe the initial clickbait that draws followers to Sheehan's TikTok account, her audacious joy for mountain life is what keeps them coming back for more.

"I love that moving to Bend I have met so many rad skiers and snowboarders, and suddenly I have a huge community of people who share my love for this sport. It's just the world I've always wanted to be a part of," beams Sheehan.

She adds, "I was a preschool teacher in Eugene before I moved to Bend, so instructing preschooler 'rippers' at Bachelor worked out great. That age demographic is not most instructors' top choice. For me, it was an easy transition and I still prefer working with younger kids in my fourth year as an instructor. I love bringing people into this sport and encouraging people to push themselves. I love seeing the moment click in kids' heads when they realize skiing is fun and not this big scary thing."

Sheehan's favorite scary childhood ski memories? "I have vivid memories of the bad times. Falling off a lift, losing my skis in the trees and struggling as an 8-year-old to put them back on and getting carsick on the drive."

As an adult, Sheehan sometimes does battle with villains like internet trolls and Post Traumatic Stress Disorder.

Of the internet haters, "It's highlighted the very real sexism that still exists in this sport. It was my first time getting viral hate messages though, and it did feel discouraging."

Not willing to swallow the kryptonite, Sheehan handles naysayers with tact and mountain class, noting, "I think calling them out is the best thing we can do. I saw a lot of hate messages on other girls' pages just trying to better themselves at their sport and it's wild to me. I think we need to stop complimenting girls who ski as 'really good for a girl.' I think that's incredibly limiting and we all are guilty of doing that. Unfortunately, that thinking leads into how we treat professional women athletes in any sport. Eileen Gu, who is 17, and just won three medals in the X Games, has people telling her she only won because she was a girl, and that, to me, tells you everything you need to know about how girls can be treated in this community."

The upshot to putting yourself out there on social media? Tons of supporters. "I love the people I have connected with through TikTok. I feel like I have friends to go ski with in [Lake] Tahoe, Utah, and New Zealand now. Some of the girls who are really great park skiers have been giving me tips and encouraging me on my journey which has been amazing! I'm so honored to be thought of us a shero. I hope that I can continue helping girls get into the park, try a new trick or try whatever terrain they want. I hope I can continue helping people get into this sport without judgement and making it a space for women to push themselves."

A true renaissance heroine of the time, after the lifts stop running, you'll find Sheehan in front of her live audience as a cellist and co-singer-songwriter in the local band Lassen. Look for performance listings as spring blossoms and the number of patrons vaccinated increases.

Editor's note: This column marks the start of a monthly feature in the Outside section, highlighting the achievements of female and non-binary athletes in Central Oregon.