It's a Go: Bend City Council Votes for Transportation and Revitalization Projects

August 06, 2020
1 comment
The Bend City Council voted Wednesday to move forward with some major transportation and development proposals that could change the face of Bend in the coming decades. 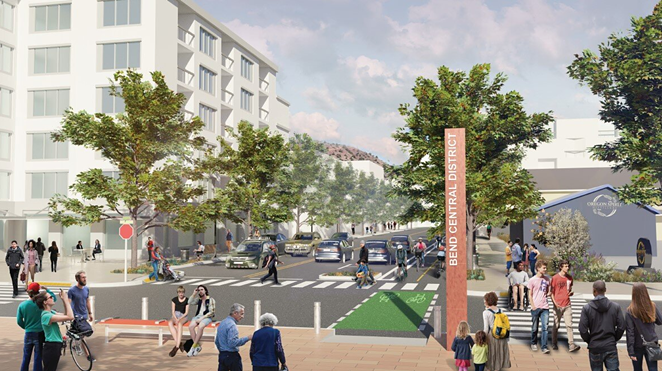 After voting to delay a public vote on the May ballot, the Bend City Council voted Wednesday to put the General Obligation Transportation Bond on the November ballot. The bond will bring in a projected $190 million to fund improvements to east-west connections, projects to ease traffic congestion and a network of cross-town bike and pedestrian routes. It will cost the average homeowner $170 a year.

The projects are outlined in the Source's December article, "If You Build It, Will They Come?"

The political action committee, Go Bend 2020, commissioned a poll conducted by Change Research during the second week of July to take the temperature of likely voters on the bond. It found 61% of poll participants supported the bond, though that dropped to 54% when participants found out they would pay an average of $165 a year for it. The poll also revealed that the state of the economy could make or break public support for the measure. This finding led Go Bend 2020 to suggest to the City Council that it delay collecting taxes for it for a couple of years.

The Council decided not to levy taxes for the bond until 2022, and also to create an oversight committee to make sure the City is meeting its bond commitments. The City Council will vote Aug. 19 on a final resolution to put on the bond on the November ballot. 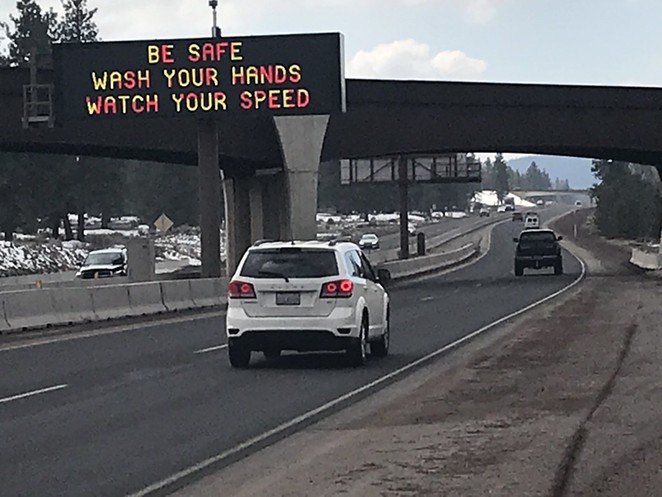 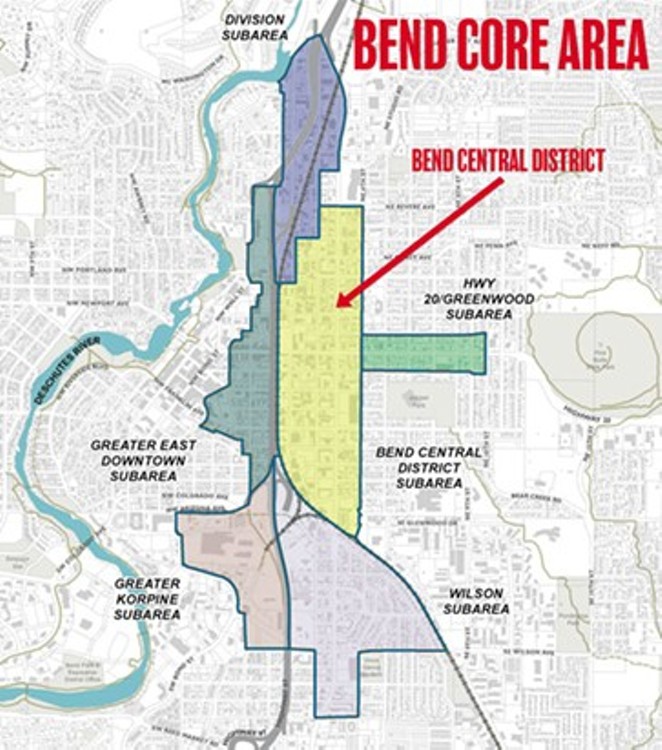 The City Council also voted six to one in favor of creating an urban renewal district in the industrial area surrounding NE Third Street, called the Bend Core Area. Councilor Bill Moseley was the sole
"no" vote.

Over a period of 30 years, as property values increase in the area, the extra property tax revenue would be collected by the City and then be reinvested in projects to revitalize these neighborhoods and make them more attractive for housing, work and play. Proposed projects include adding public spaces, transportation improvements for walking, biking and public transit and money to finance affordable housing and other developments.

Moey Newbold, Central Oregon LandWatch’s Director of Urban Planning, has been involved in the process since its inception, and created a Bend Central District visionary board to help influence the final outcome of the plan for the Bend Core Area.

“Bend’s population is exploding, and we need a strategy to accommodate the growth; one that utilizes underdeveloped parts of our city instead of sprawling onto our farms and forests,” Newbold wrote on COLW’s website. “We need well-laid plans that prioritize efficient use of land and protect what we value most about living in Central Oregon.

"The Core Area Plan presents a solution. It focuses growth in the inner east side of Bend along Third Street, an area that currently houses one resident per acre but has the potential to accommodate thousands of additional residents and add new jobs in the heart of Bend.”

Almost everyone that spoke at the public hearing for the plan Wednesday night was in favor. One public commenter against the plan was Allegra Briggs, who told the Council she believed the decision should be left to voters. The majority of public comments addressed to the Council in writing were also in favor.

In response, the City Council decided to delay the collection of funds for the improvement projects for at least a year. Other dissenters argued that area will naturally develop, so there is no need for the City to get involved.

“Given the surging demand for land within the City of Bend boundaries and the many businesses and entrepreneurs who live/are coming to our community, it’s difficult to believe that this land in the very center of the city will not be developed in a timely fashion by private, market-driven forces.”

“City literature says the TIF does not increase taxes. But the literature fails to point out that the funding per capita for the services of other Districts goes down. There is less money to spread over the growing population for 30 years.”

Tax increment funding may be best understood visually, as it's complicated and there's plenty of room for misinterpretation. Essentially, property owners in Bend pay line items on their property tax bill to various tax districts, including the City of Bend, schools, the public libraries, 911, county law enforcement, Deschutes County, Central Oregon Community College and the High Desert Education Service District. All of these entities will receive approximately the same amount that they received last year from property taxes from the Bend Core Area for the next 30 years. It's frozen in place: 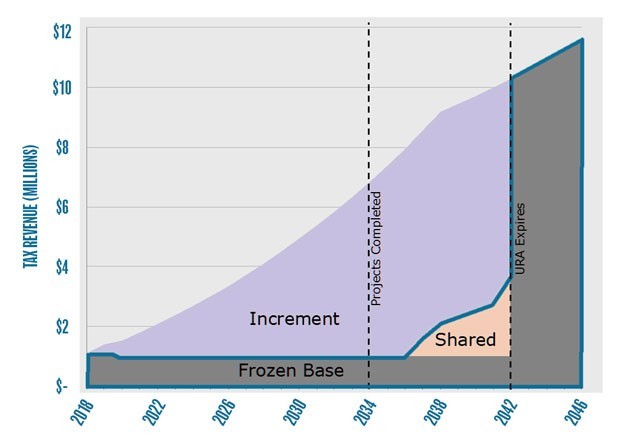 As the area becomes more valuable and tax collections go up, the extra money goes into improving the renewal area. At the end of 30 years, if all goes according to plan, these districts will end up making much more than they would have—in the way of taxation from new developments—than if development moved at the same rate that it is now.


Also Wednesday, City of Bend staff submitted a nine-page document of possible operating requirements for area lodging facilities to the City Council. Councilors were split on whether or not to adopt orders that would require specific cleaning practices, extra training for cleaning staff and a 24-hour waiting period between different visitors.

Councilor Gena Goodman-Campbell advocated for a policy she said would “protect cleaning staff.” This would have required rooms stay vacant for at least three hours before staff entered to clean, in order to ventilate out any aerosol traces of COVID-19 that may be in the room.

But Councilors Justin Livingston, Bill Moseley and Chris Piper argued against any regulations on hoteliers because, the councilors said, these lodging property owners were already doing enough to prevent the spread of COVID-19.

“I think we’re making a lot of assumptions,” said Councilor Chris Piper. “I think us imposing a three-hour gap or a 24-hour gap—that makes it difficult from a resource standpoint and logistics and staff planning and preparation… I’m very hesitant to even more forward in that type of delay… I think we need to give [the people in the lodging industry] more credit than we’re giving them here tonight.”

Most of the proposals related to lodging did not pass, though the Council did opt to require a 24-hour waiting period after a guest with a confirmed diagnosis of COVID-19 stays in a room.