It's in the Water

If you've ever been on the Deschutes Brewery Tour, then you've most certainly heard about how important water quality is in the brewing process. I asked Larry Johnson from Shade Tree Brewing, "How does water factor into making good beer?" 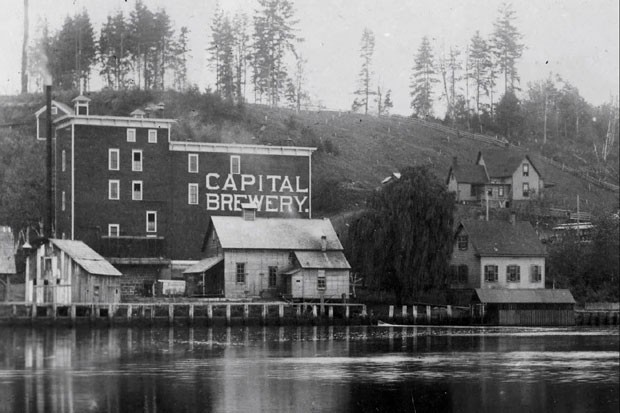 Olympia Brewing was founded in 1896. Pre-Prohibition folks! The founder was a German immigrant, Leopold Schmidt, from Montana. The brewery resided on Tumwater Falls, at the end of the Deschutes River (in Washington state). I found some maps of the Deschutes River and it's wild! It goes up down, and all over the place before finally spilling out into Olympia's Capitol Lake. In 1902, the company secretary, Frank Kenney, came up with the slogan, "It's in the water." But what does this even mean?

Olympia Brewing obtained its water from an artesian well (until later when it was purchased by a larger company). An artesian well is an aquifer that contains ground water under positive pressure, according to Wikipedia. An artesian well can also be fossil water aquifers if adequate pressure is present. It's a natural source of water trapped under the surface of the earth. Once drilled, the pressure allows the water to reach the surface.

An organization called "It's Still in the Water" began efforts to protect the artesian well, called the Jefferson Street Well, and fought to keep the well public. It is currently owned by the Public Utility Department, and the City of Olympia pays to test the water to ensure that its quality is adequate for drinking. The organization later changed its name to H2Olympia and became a nonprofit to continue the fight.

So, what do I take away from this? The Deschutes River is awesome. It provides the water for some killer beer! I grew up in Washington and have fond memories of watching the falls at the brewery. I also remember eating at the fancy French restaurant at the base of the falls and refusing to eat snails. Gross. OK, now go grab a beer and be thankful that the Northwest has awesome water! Cheers!