It's in Their Blood | The Source Weekly - Bend, Oregon

It's in Their Blood

Ahead of their show at 4 Peaks, Oliver Wood of The Wood Brothers talks about growing up in a musical family

Last year The Wood Brothers received a Grammy nomination for best Americana Album with the band's project, "One Drop Of Truth." While the group—formed by brothers Oliver and Chris Wood and Jano Rix—is well known for its talent, that was the first time their music was recognized on that level.

Even still, the band has become quite respected for its high level of performance and has consistently put out top-notch Americana music since 2006. This may be due to the fact that music has been flowing around them since a young age. Oliver even tells me his children are currently deep in it, with one trumpet and one trombone player (both of them also play drums and keys). 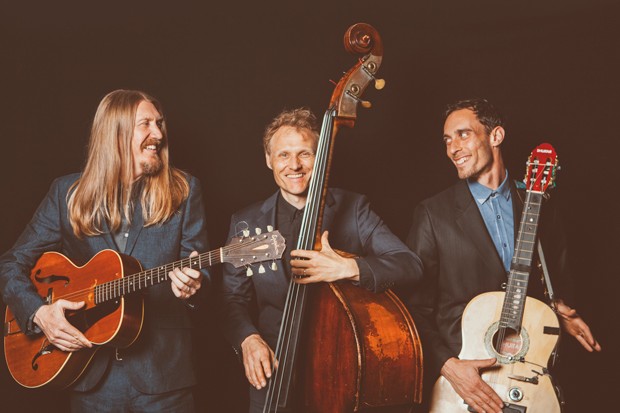 Over the phone, The Source spoke with Oliver (formerly guitarist/vocalist of the band King Johnson) about his and brother Chris' (former bass player of the band, Medeski, Martin & Wood) musical journeys before they headline 4 Peaks Music Festival this weekend.

Source Weekly: How's it been getting to play with your brother for all these years? I imagine it's a pretty cool opportunity.

Oliver Wood: Super cool! You know, we've been doing this for over 12 years now. It's great. It's one of these things that keeps us connected. We've had music careers before The Wood Brothers that didn't include each other, you know? We went off with our own bands and played for 12, 14 years until we were middle-aged dudes. It was really a cool way for us to reconnect after being apart both musically and socially, really, as brothers.

SW: Do you think it's changed your relationship in any way or shifted the dynamic?

OW: My brother and I are very different people and we learn from each other. It's really cool because we see our family lineage in ourselves and in each other. We see our parents and our kids. All of us are different within our families. So, it's cool to be connected and to learn, and to understand and appreciate your own identity and to also learn from your sibling is a great thing. To have that every day connection and support– both creatively but also just personally. It's awesome to be able to share this kind of career.

SW: Was music something you two were always able to easily bond over growing up?

OW: Yes! I'm four years older, so we had a couple years in our teenage years where we were both really starting to get into music and where we would collaborate and play things together, make recordings and jam in the garage.

I think our different time tables and personalities took us different directions for several years before we got back together. But we were musically compatible from the start. I was the guy who got a bass when he was 16 and then shortly after that switched to guitar and I gave my brother the bass– he ran with it and became just a really accomplished bass player at a very young age. He was much more focused than I ever was. I showed him the first 12-bar blues progression and started him on that bass and he just disappeared in his room for a couple years and became amazing really fast! I've been trying to catch up ever since on the guitar.

SW: And your dad was also a musician?

OW: Yep, still is. Not as a profession necessarily, but he was always a very accomplished musician. [He was] A big part of the folk movement back in the late '50s early '60s, back when he was a teenager and also in college he had a music radio show. He has an amazing repertoire of folk songs—he knows 500 songs. That was our exposure to live music growing up. It was him playing around the campfire and in the living room. We just thought that was a normal thing. I actually took it for granted until later on. Last year was the first time we had him on stage with us and played our songs together which was wayyy overdue. It was really fun and special. It really helped us appreciate what a full circle we've made and how much he influenced it.

We grew up in Boulder, Colorado, and my dad still lives there so we were at the Boulder Theater. We're gonna play Red Rocks in September and that will be our first headlining show there, so hopefully we'll get him up there, too.

SW: That'd be a really cool experience. I imagine you've been out to a few shows at Red Rocks?

OW: Oh yeah! When I was a teenager that was where I saw my first concerts. I saw Tom Petty, Stevie Ray Vaughan, ZZ Top, the Talking Heads – I saw some incredible stuff between the ages of like 17 and 21.

SW: Who were you listening to growing up?

OW: Ah man, we we're listening to all kinds of stuff! We we're really digging in to my dad's record collection at an early age so that was everything from The Beatles, to The Who, to Led Zeppelin – stuff like that. He had all kinds of folk stuff like Joni Mitchell and Bob Dylan. The stuff that left the biggest impression early on, to both of us I think, was just some of the blues stuff. Lightnin' Hopkins, Jimmy Reed, stuff that was really raw and gritty and also accessible as a beginning musician. Not that any one of us has come close to Jimmy Reed or Lightnin' Hopkins.

SW: I think it's good to have that vast taste in music just because there are so many talented musicians across every genre, so you get exposed to a lot of skills that way.

OW: Oh, absolutely! I know my brother and I, as we got more accomplished at music and developed our tastes in music, we all go through these phases of being snobs – like 'I only like jazz right now,' or whatever. I think after years and years you start to realize stuff that I didn't appreciate at the time – like Nirvana – when Nirvana came out I was into like B.B. King and Albert King so I was like 'This is crap,' you know I didn't get it. But now I listen to it and I'm like 'Holy crap, this is amazing!' I gotta say I've learned a lot from my kids because my kids have not become jaded at all and they listen to everything. It's nice to listen like a kid and just appreciate everything. It's emotionally powerful.

SW: Last year was a pretty big year for you guys, with the album and getting the Grammy nomination. What was that moment like for you?

OW: Well, it was sweet! It was kind of rewarding. That was an album that we were very hands-on with. We produced it ourselves and we made it the way we wanted to make it. We were kind of in this creative bubble. We didn't collaborate with anyone. It was just us and a few great engineers. We were really proud of that. It was the first time we got any recognition like that and after doing it so independently was especially rewarding.