I hate to add to the already-divisive atmosphere our country is facing this year, but I have to say it: "Young Frankenstein" is the funniest movie of all time.

I know, I know—you're going to say that "Anchorman" is funnier, or perhaps "Ghostbusters" or the latest Kevin Hart cash-in.

I've thought about this a lot. Surprisingly, I came to this decision not by watching the movie, but by exploring this enduring masterpiece in a new way—as a musical.

A talented and hilarious cast will bring the musical adaptation of "Young Frankenstein" to life at Bend's 2nd Street Theater starting Friday, Oct. 28. Opening night will kick off with a champagne reception at 6:30 pm, one hour before showtime. Meanwhile, costume contests are happening throughout opening weekend.

For any confused readers, "Young Frankenstein" is a 1974 film directed by Mel Brooks and starring Gene Wilder. (The two also co-wrote the film.) The story follows the ingenious scientist Frederick Frankenstein (Wilder), a reluctant grandson of the infamous mad scientist who brought a dead body to life. Summoned to Transylvania to settle his late grandfather's affairs, Frederick soon devotes his efforts to replicating the experiment, bringing to life a giant, misunderstood monster.

Eventually, Brooks, along with famed playwright Thomas Meehan, adapted the story to stage, expertly transposing the best parts of the movie to the musical. All the witty characters, the classic lines, the side-splitting moments—it's all there. (Including the provocative jokes that might not be suitable for children. You've been warned, mom and dad.)

But the musical brings an additional appeal with its 1930s-inspired show tunes, an element that immediately caught the attention of the show's director, Patricia West-Del Ruth. "My father-in-law was Roy Del Ruth, and he directed several of the biggest musical films of the '30s," she said.

Besides wanting to honor her father-in-law, West-Del Ruth also loves the depth of the material. "This is not a production that is just about silly jokes. There is something much deeper in it," she said. "Mary Shelley wrote the original story at the dawn of the Industrial Age. The fears that we had during the Industrial Age are not so different from the same fears that we have even now, when we talk about nuclear war or building robots. It's a horror story that keeps repeating itself in each new modern age."

For the local version, the production's excellent casting extends all the way down the line. (Full disclosure: the Source's Arts and Culture Editor, Jared Rasic, plays The Monster in this production.) Even during the rehearsal I watched, the players deftly nailed the show's comedic timing. The lively performances are expertly arranged by choreographer Michelle Mejaski and musical director Karen Sipes—who pulls double duty as the show's Frau Blucher.

The entire theater is utilized to great effect, with set and light designs by Gary Loddo and Mike Nowak, respectively. The show is also the first in town to use a special scrim, or screen, that will project visual designs by Jesse Locke. Scenes of an iconic castle, creepy graveyard, surreal nightmares and more add to the visual storytelling.

"The goal was to capture that sense of being in a movie theatre," West-Del Ruth said. "I also was hoping to achieve a feeling that was indicative of the Classical Golden Age of Hollywood."

While that sense of nostalgia for the film and the style certainly powers the musical, it never overwhelms it, and there's still plenty of new material and engaging theater technique to keep you laughing. After leaving the theater I knew how The Monster felt with all that electricity running through his body, and I can't wait to go back for another jolt of fun.

Watch the transformation from man to monster with a slideshow of behind-the-scenes images, featuring the Source's Jared Rasic...aka "The Monster." 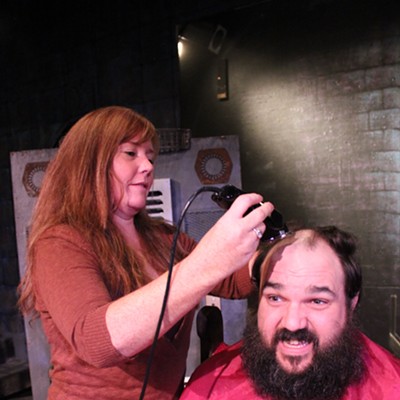 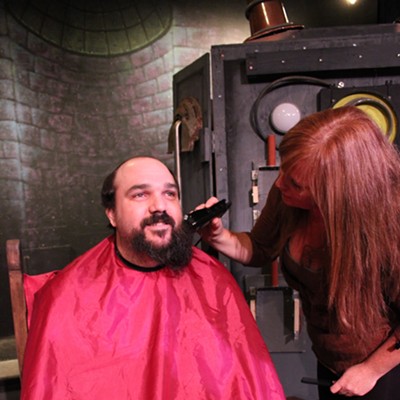