Some people just never "retire;" they just jump from one job to another. (Editor's note: Case in point: Jim Anderson, who penned this piece despite announcing his "retirement" from this column!)

Take Stu Garret, of Bend, as an example. When I met him way back in the '70s, he was a family doctor practicing in Bend at the old Bend Memorial Clinic, started by some of our even older doctors. 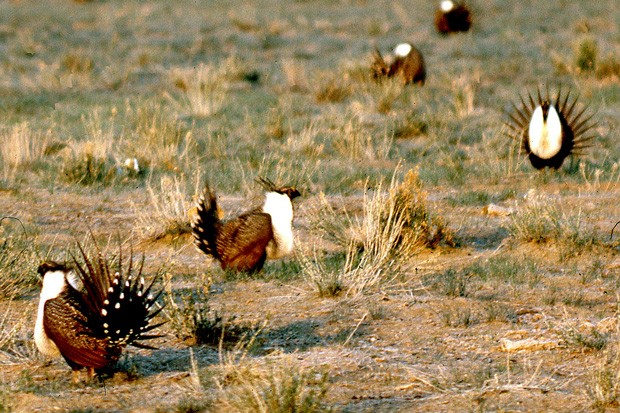 Garrett saved me from a lot of pain and anguish time and time again when I fell out of trees and got myself into physical trouble banding owls, eagle and hawks.

Just about the time he was in his heyday, I was trying to learn as much as I could about the goings-on of kestrels, great horned owls and golden eagles. It was then the Bureau of Land Management decided that cows were the most important animal on earth and without hesitation, sprayed chemicals all over our High Desert to kill sagebrush. Then they converted thousands and thousands of what was native wildlife public land into cow pastures.

You can still see that cow country today all over Lake County and what was once the Oregon High Desert of eastern Oregon.

I can also recall when the BLM suddenly went, "Whoops!" and realized they had destroyed thousands and thousands of acres of Greater sage-grouse habitat. That was especially so when we watched sage-grouse numbers slowly slide out of sight.

My first adventure with sage-grouse was in the early '50s when my old pal, Ed Park, and I took newcomer birders from Great Britain, Alan and Sheila Baldridge, to see their first sage grouse in America. We had them pitch their tent overnight on Reub Long's hay field/strutting ground at Ft. Rock. In the morning our native sage-grouse were right in the Baldridge's front yard.

Since those wonderful times of long ago, our Greater sage-grouse numbers have shrunk to alarming low numbers, and Garrett and his team of East of the Cascades Audubon Society volunteers are working their butts off trying to remedy the situation.

They are learning our grouse —and raptors —have a lot to worry about. The very land they depend on to stay alive and create more of their kind is under threat of vanishing, along with it the plants and animals that share it.

When the BLM sprayed thousands and thousands of acres of sagebrush with those deadly herbicides, they also destroyed life in that entire biome as we knew it. Then, when they planted crested wheat and other non-native stuff to satisfy the needs of cattle-growers, that meant the end of hundreds of species of insects as well.

If you go out and look around in that so-called pastureland today, you can see tiny places where rabbit brush is trying to make a comeback, along with a few native plants. But the all-important insects are not there. And without a variety of insects, sage-grouse do not have that vital food element in their babies' lives—and neither do other birds and animals in the once-great sage-grouse biome.

If you travel through areas near the waterholes that the BLM, Oregon Department of Fish and Wildlife and Garrett and his crew maintain for grouse and other birds and wildlife, you'll see thousands of tiny reflectors they've installed on barbed wire fences to keep sage-grouse and other wildlife from striking the wires.

In his latest report, Garrett and his partner, retired entomology professor from Oregon State University, Dr. Jerry Freilich, say this: "Sage-grouse have been impacted by a constellation of disturbances. But despite many efforts, their numbers have never stopped declining. This is the time for emergency triage. If we (and many supporting authors) are correct that nesting and brood-rearing habitat is the critical "missing link" to Sage-grouse survival, then it is essential to restore some habitat to specific parameters.

"These parameters have been demonstrated in careful studies but no one, to our knowledge, has expressly worked to recreate these conditions in field plots. We suspect that part of the problem is a depletion of the soil seed-bank and we propose new methods to address that issue."

Now I wonder, is it time to give the land back to the indigenous wildlife that need it and let cows eat hay that's being raised on underground water (that, too, may run out someday)?

In the meantime, ODFW, in its all-knowing and all-wise decision-making—despite the sage grouse's diminishing population—still maintains a hunting season on them.

Here's the way they do it:

- The hunting application period begins on July 1. Permit numbers for each hunt unit are not posted until early August, after population surveys are complete. Applications are due the Monday closest to Aug. 20 every year. It costs $4 to apply for a permit, plus another $2 to buy the permit if you're successful.

- Results are available on Aug. 25 and the nine-day season usually spans the first and second weekends of September. The 2020 season is Sept. 12-20.

- Hunters are limited to a daily and seasonal bag limit of two birds, of either sex.

- In addition to the sage-grouse permit, hunters also must have a hunting license and an upland bird validation.

- If you are successful in the permit draw, ODFW will send you a wing-return envelope for one wing from each of your harvested birds. This information is critical to managers, offering important data about the population.

This statement from the Father of Land Conservation: Aldo Leopold, seems appropriate to end this discussion: "If the land mechanism as a whole is good then every part is good, whether we understand it or not...To keep every cog and wheel is the first precaution of intelligent tinkering."