Jacob Norris: Painting in the Wild

It's a testament to a community when an artist wants to stay settled in the place they began. For Jacob Norris, his painting began when he was a student at Mountain View High School and he studied with Ken Roth. That relationship proved influential for Norris, who apprenticed with Roth for several years after high school, as well. Roth showed Norris the ins and outs of painting, from stretching canvases to contacting galleries. It was an experience that had a deep impact on Norris and continues to influence his work. 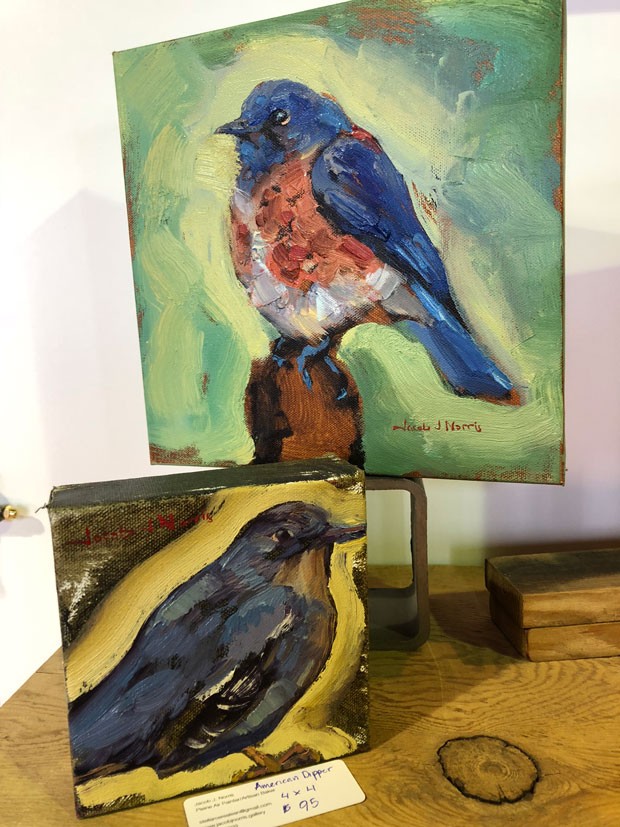 Norris primarily paints using oils on canvas or board and even forays into the found-object world by painting on pieces of wood he finds on the side of the road. "To a woodworker it would just be trash, but I like to make something beautiful from it," states Norris. Norris's work is often energetic and encompasses life in each brush stroke. Impressionistic and rich, his work often brings subjects to life in an honoring way.

Recently, he's been painting birds— all kinds—in flight, swimming, sitting in trees. Before past shows, Norris began a practice of painting a few small birds, in case nothing else sold. It's turned into a mediation on what he describes as a way to integrate what's valuable to others and also valuable to him. While he'll continue to paint birds and his beloved landscapes, Norris is also moving onto seascapes.

"It's like a vacation for me to paint that," jokes Norris. But I know what he means. Art can carry you away—either as a viewer or a maker. Norris proves that either way you get carried away, it's delightful and inspiring.