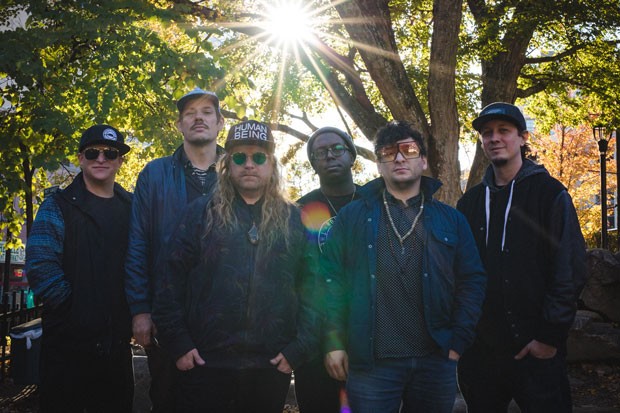 If you would have told me in high school that a rad music festival would be held annually at the Diamond Stone Guest Lodges in the Lazy River South neighborhood of La Pine, I would have been stoked, but may not have believed you. I grew up minutes from the festival grounds and would have been over the moon to have had such an eclectic array of music within earshot of my bedroom. The Newberry Event Music & Arts Festival started in 2013 as a fundraiser to help defeat MS, bringing together musicians from a variety of genres, while concertgoers enjoy camping, food, craft beverages and local artisans in a beautiful natural environment.

This year, the festival lineup can't be beat. Funk band Lettuce headlines on Saturday night. The entire lineup ranges in genre from reggae to bluegrass, funk to blues and good ol' rock and roll. Nationally touring Bend favorites Pimps of Joytime headline the festival Friday night. They're preceded by The Shook Twins, John Craigie and more. Saturday includes performances from Natty Red (locals who I caught at Bend Summer Festival and would highly recommend—a Pick's Pick, if you will), The Talbot Brothers and The Stone Foxes. Sunday wraps with Five Alarm Funk and many others.

I spoke to guitarist Adam "Shmeeans" Smirnoff from Saturday's headliner, Lettuce, hailing from Boston and bringing the funk to the nation since 1992. The band blends classic funk with hip-hop urgency, which culminates in the perfect band for the festival scene.

"We like to feed off of the energy of the audience, and festivals are perfect for that," Smirnoff says. "It inspires us to go in different directions."

Lettuce has become known for its high-energy festival sets, with ample experience that creating a setlist can be effected by the time of day they perform. They prefer to play their dreamier material after dark, during a night set. During the day, they perform more of their up-tempo songs in order to get people excited and moving. They can also vary the setlist depending on the vibe.

The band's most recent album, "Witches Stew," plays off of the Miles Davis album, "Bitches Brew," which they have dedicated to all of the later material by the jazz great.

"I really believe Miles Davis is the godfather of jam bands," Smirnoff says. "He's influenced everyone."

For their next album, Lettuce already has 26 songs recorded and are currently in the process of figuring out how to release that material. Smirnoff discusses the possibility of multiple releases, but sounds confident this will be the band's best work to date.

"Sound wise, it's going to be the best sounding album we've ever done," Smirnoff says without doubt. " I think this is going to be our best piece of work."

Join Lettuce on Saturday night for a funky headlining set, along with a variety of other great bands getting people moving and dancing for a great cause in South County.