Jenny From the Flock and Girl Loves Oy

Okay, so it seems he didn't quite get around to mailing out the formal invitations to the funeral for his freedom. 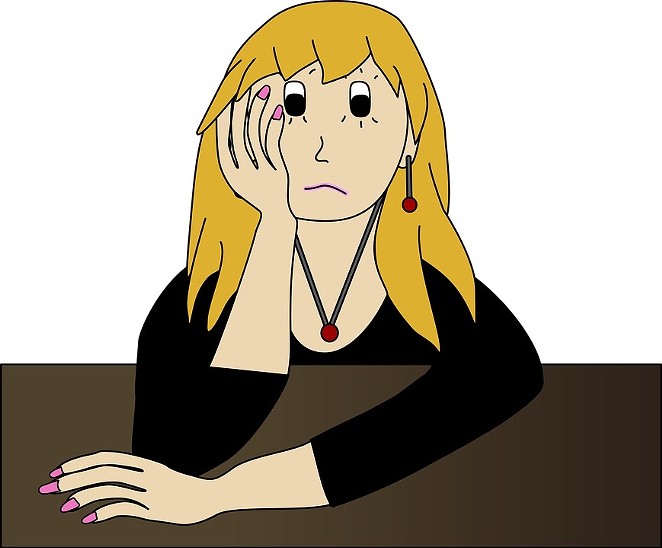 I hit it off with this guy I met on Match.com. We've been dating for a month and slept together twice. He said he'd delete his Match profile because things were going so well, so I deleted mine. Recently, a mutual friend told me he'd just gone on Tinder. I'm super upset, and though we didn't have the exclusivity talk, it seemed implied.

Okay, so it seems he didn't quite get around to mailing out the formal invitations to the funeral for his freedom.

Now, the guy may be an out-and-out lying cad, cooing commitment-y things to you that he never intended to follow through on. However, it's also possible that he was legit enthusiastic in that moment when he offered to delete Match—confusing the buzzy high of a love thing that's brand-new with a love thing that's really right.

Neuroscientist Wolfram Schultz discovered that things that are new to us—people, relationships, pleasure-producing substances—activate our brain's reward circuitry and its chemical messenger boy, dopamine, in a way things we're used to do not. (That very first bite of chocolate cake is always the tastiest, most chocogasmic.)

In fact, Schultz's research suggests that "novel rewards" may be two to three times more dopamine-elevating than delishy stuff we've previously experienced. Basically, once we've tried something, even if we really, really enjoyed it the first time (hot diggity!), it becomes less motivating to us (kinda lukewarm diggity).

This motivational downshift comes out of how dopamine neurons are, in a sense, fortuneteller cells; they predict how rewarding things or situations will be. Dopamine, contrary to what countless books and articles contend, is not a "pleasure chemical." It does not generate a heroin rush-type euphoria. It's stimulating. It drives wanting and seeking, motivating us to explore new stuff that might enhance our ability to pass on our genes.

After dopamine calculates the difference between the initial high a thing gave us when it was new and its current level of more meh rewardingness, it can push us to go out and chase the initial high—seek some new provider, and then another and another: "Sure, I could have a stable adult relationship—or I could continue my groundbreaking research into The Tramp Stamps Of Tinder."

This is not an excuse for this guy's lack of forthcomingness but a possible explanation for why he said he'd delete Match but then signed right up for Tinder. It's also possible the powerful human fear of regret is at play. Going exclusive with you would mean waving bye-bye to the rest of womankind. It's possible that he and his penis feel the need for a second opinion.

The problem from your end is that your wanting to go exclusive with him is the dating version of the impulse purchase. A month in, you don't have enough information to judge his character, see whether he's boyfriend-grade, and see whether there's, uh, brand loyalty. You should be just starting to see who he is and reserving judgment — much as you'd like to believe that he's a wild dude seeking domestication, kind of like a lion knocking on the door of the zoo: "Got any vacancies, chief?"

I'm a woman who wants a serious relationship, and a happily married friend is urging me to go on Jdate. I'm not Jewish and not interested in converting. Wouldn't people be mad I'm on there?

Men on FarmersOnly would be understandably annoyed if I posted a profile there, as my idea of farming is keeping a houseplant alive for more than a year.

But this site is called Jdate, not JewsOnly. Sure, some will be annoyed to find a nice non-Jewish girl like you there, but there are others—like atheists from Jewish backgrounds and not-very-observant Jews—who might not find it a deal breaker. Uh, that is, until they register the reality of inviting mom, dad, and bubbe over for Christmakkah.

Cognitive neuroscientist Michael Gazzaniga estimates that 98 percent of our brain's activity is subconscious—including some of our decision-making. A man seeking a relationship can have his short-term mating standards triggered without his knowing it while going through women's profiles online. Not exactly surprisingly, evolutionary psychologists David Buss and David Schmitt find men in short-term mode are prone to lowering the bar on "their mate preference standards ... across an array of mate qualities, including personality, intelligence, and even attractiveness."

Religion is surely one of these. Recognize this risk from being on Jdate as a non-J. If you do end up dating a Jewish guy, do your best, as early as possible, to suss out whether questions like "But what religion will the children be?" would lead to his ultimately following the advice of poet Dylan, uh, Thomasenstein: "Do not go gentile into that good night."