"Shoot The Moon" shows the musician opening up and having fun

There are nods to Central Oregon all throughout Jeshua Marshall's first solo album. Whether it be his mentions of the area's desert landscapes, the juniper trees or an entire song titled "Ochoco Hills," there is plenty of homegrown love on the album. Even on the cover, you see Marshall playing his guitar with Smith Rock State Park resting in the background. With an Americana mix that is both bluesy and folky, "Shoot The Moon" is an album that definitely feels like it's from home.

Fitted with 10 tracks that highlight Marshall's skills as a musician and vocalist, alongside production and drums from the Mad Caddies' Todd Rosenberg, the project is able to span a ton of material and talking points. From facing policing brutality and racism on "No More," to experiencing moments of grief after losing a loved one on "Dragonfly," and even changing your life's course by making the right move on the album's title track. Marshall bares a lot on the record and dives deep into life—leaving us with thought-provoking lyrics to dwell on after they play by. 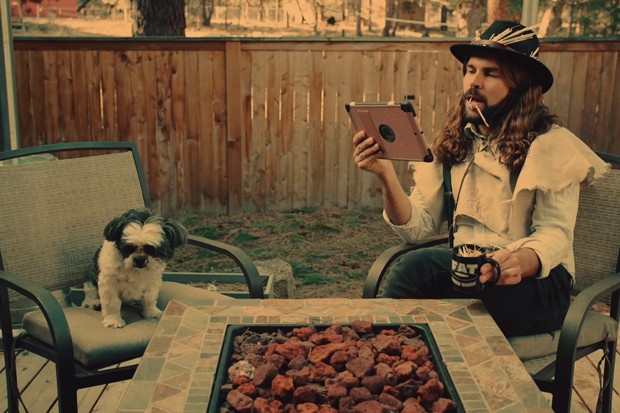 The album was mainly recorded at Fuzz Records, a nonprofit record label that Marshall and Rosenberg started together. To hear "Shoot The Moon," head to Spotify or Bandcamp. Get to know more about the record in our Q&A with Marshall below.

Source Weekly: This is your first solo project and you've been working on it for a while now. How does it feel to finally have it released for people to hear?

Jeshua Marshall: It feels awesome. It feels kind of surreal right now. I'm super excited just to get it out. But now the real work begins. Even though it's been like 10 years of writing these songs [laughs]. I recorded it all at Fuzz Records. We [Marshall and Rosenberg] started a nonprofit record label, and that's the inprint we're using.

SW: Do you find yourself often inspired by the surroundings here? And what's your writing process like?

JW: Yeah, absolutely! It just kind of slips into my lyrics. Before COVID, a little bit before, I set a challenge to write a song at least once a week. I was doing well, and then COVID hit, and then I got all depressed and didn't write anything for like a month. Since then I've been able to lock myself into the practice of trying to write a song every day. I've probably written like 200 to 300 songs in the past year.

SW: It also seems like you're sharing a lot about your life and feelings in the music, whether it be your own life changes, death, police brutality or your family. Did you realize the record was going to be such an open one while you were making it? And even though you've made music for a long time, does being vulnerable still make you nervous?

JW: It kind of just happened that way... but I felt my first solo project should be an autobiography of sorts. Some fiction, but mostly just from personal experience. And it does a bit, you know. Especially if people don't get it, like, 'oh no, they don't like my heart!' [laughs].

SW: One of my favorite songs on the album is "Weeping Symphony." I love how detailed the story is and how mellow and stripped back it plays. Can you share a little more about the inspiration?

JW: That song is inspired by the loss of my dad, who was like a best friend to me and my brother. He was a huge reason why we played music. He played bass guitar in his church's band. Then he kind of gave it up, maybe even before I was born. He was always just a huge inspiration for me and my Damon. Him and my mom were always super supportive of what we were doing. That's probably the oldest song I started writing, probably in 2013, or 2014. I've actually recorded a couple versions of it. We've been playing it so long in a certain way, when we got into the studio with Todd we changed it a little bit and took it in a different direction.

SW: Can we expect any more music videos from the album? You guys did one for "Shoot The Moon" which was really great.

JW: Yeah! We actually have a music video for "Dragonfly" coming soon. We did all the shooting for it a few months ago and there's gonna be some animation in there as well (done by Jesse Locke of UnLockedfilms). It should be out in time for the release party.

SW: Is there anything you're most proud of about the album?

JW: Just completing it [laughs]. I've been thinking about this album for years and years. I would have liked to put something out a long time ago, but just all the time that it took and all the obstacles and whatnot that I have had to overcome to get to this point. I've put in a lot of time honing my craft vocally and lyrically and on the guitar. So it's cool to see it out as one work of art that I can revisit.