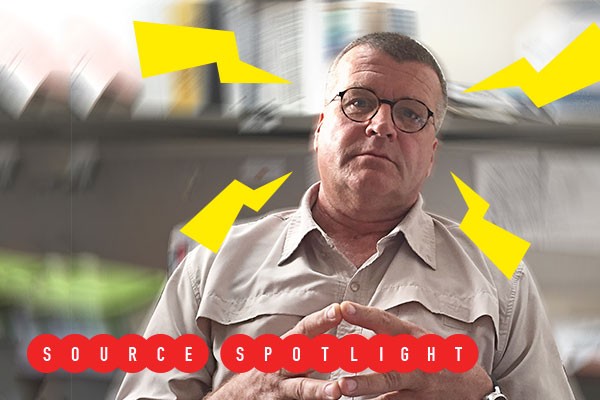 With a shade of cynicism.

You might not know it, but Jim Long, the City of Bend’s Affordable Housing Manager of 12 years, looks at the housing crisis with an infinite supply of hopefulness, passion and belief in the decency of community. “You gotta be to do this job,” he chuckles, “Otherwise if you can’t look at the bright side then don’t get into this line of work.”

Long has been working on the affordable housing issue long before it became a national crisis and made headlines — over 30 years. The Oregon native and former Navy public affairs officer is known for his quick wit and dry sense of humor. His “Out of Office” email says he would 'delete the emails, in the order that they came in'."

When I asked him to do this interview, he replied he was flattered but that he's “rather boring.”

I promised it would be painless.
He replied, “That’s what my dentist says.”

As a young Navy journalist, he would rile up his fellow service members by “keeping a copy of the ‘Communist Manifesto’ in my back pocket — just to see their reaction." Today he's come a long way, forging relationships and working with groups to champion for the disadvantaged. And if you’re complaining about the lack of housing, Long has this message: “Get involved. Don’t just complain, come to our meetings, go volunteer at Habitat for Humanity or COVO. Don’t complain about the lack of affordable housing—instead help do something about it.”

Seeing is Believing: His Start

He notes the housing crunch impacts many groups. “You could be the staunch Republican businessman who also understands that your employees need a place to live, or you could be the liberal activist who understands that everyone needs a place to live. It’s not a left/right issue, which makes it a unique field to work in.”
"Your failures are always out there but you have to look at your successes..."Sometimes it's as simple as going and meeting a family that's moving in or a homeless veteran who's no longer on the street." — Jim Long tweet this

City of Bend: A Timeline of Progress


Long has been credited with spearheading the move that eventually saw provisions for affordable housing become law in Bend. Specifically, the 2006 legislation which implemented the Affordable Housing Fee, a fee of 1/3 of 1 percent of the total valuation on all building permits submitted to the City of Bend. The City also formed an affordable housing committee and a Developer Incentives Program.

“Hands down, when we put that 2006 legislation in for affordable housing, it was a crowning achievement,” says Long, “Since then we’ve capitalized $7 million and loaned out $14 million. The important thing is that we leveraged over $75 million in federal and state dollars and $45 million in private equity.” Long says the project in NW Crossing for example, “wouldn’t have happened if we wouldn’t have had our money into it.”

Though it may not seem like it, due to its long-standing work on the matter, Long says Bend is ahead of the curve. “The benefit, opposed to other places I’ve worked, is that Bend is willing to try anything, they’ll try stuff that other cities wouldn’t," Long says. "We’ve got a very good council, good upper management which means we try to do everything we can.”

He points to Bend being number two in the state (behind Portland) in the rate of affordable housing units being put up. “We’ve put up twice as many as Salem in that time, 10 percent more than Eugene — and those cities are twice the size.”

To those who say that the City of Bend doesn't move fast enough on this issue, Long says:

“It can seem to be pretty slow moving, but it’s constantly moving...Even as we’re talking there’s 108 affordable units going up with more in the pipeline. Those have been in the works for 2-3 years, so it takes a lot to get there.”

As an illustration in the complexity of the affordable housing issue, he says that commercial builders “see their bankers three or so times, but on affordable housing projects you’ll have anywhere from seven to 12 funding sources. You’ll be scrambling to get all those to work. The guys who do it are good.”

He also credits Bend’s robust City Council in recognizing the housing needs for its citizens, and credits the City with donating land they “could've sold for market value.” In addition, he says they're looking at tweaking “development code changes” to further facilitate easier housing opportunities such as fourplexes and homebuyer assistance programs. “We’re always scrambling for new projects, new partners, we’ll work with anyone,” he says.


Glass Half Full, Rather Than Empty


Being in the industry for nearly three decades, Long has not only seen the housing and homeless situation increase, but he has seen the help for it shift — from one of social change advocacy to one of professional advocacy. “It’s kind of weird to see… I’m not saying that’s a bad thing, I’m just saying back in my day we did it because of passion. Now they’re doing it because of a career.”

Long, who enjoys spending time riding the rural roads of Oregon on his motorbike and spending time with his family in Tumalo, thinks the biggest hurdle is yet to come. “We need 5,000 units for people at around the 60 percent median income.”

When asked about Bend 2030’s recent collaboration and report to City Council pertaining to the “Missing Middle,” Long says that “all ideas are great ideas... my issue with the missing middle is when people say we need to make more housing for medium income people. You realize that the house doesn’t know who’s in it, the house doesn’t care. We just need units. But saying we need this type of house, I still don’t know what people are talking about.”

Frustrated comes with the job, however, and Long credits his abilities to look at the positive outcomes as a method to stay in the job. “Your failures are always out there but you have to look at your successes.”

What does he deem as success?

“Sometimes it’s as simple as going and meeting a family that’s moving in or a homeless veteran who’s no longer on the street. I’ve met a bunch of those guys and that makes you feel good. If you look at the giant picture you’ll get depressed, it’s a high burnout profession, but if you narrow it down and scope it down to that one family, that one lot that we got to give to habitat, and then we helped them with construction, and in the end we helped that one family. It didn’t take care of the overall problem of the whole community but you can’t fix it all and you gotta keep trying, you can’t quit.”