In local beer, membership has its privileges

t's Saturday afternoon and the largest craft-beer bottle share event in Bend is underway off Century Drive. The attendees number in the three-figures, and it seems like they've all brought their big guns—heavy stouts, delicate sours and selections from beer-nerd favorites such as Tired Hands, Monkish and Scratch. It's enough good fermentation to make an attendee's head swim—but it's not open to just everyone.

This bottle share is part of the benefits beer drinkers enjoy upon joining the Ale Club run by The Ale Apothecary, Central Oregon's hub for all things wild, open-fermented and barrel-aged. Joining this squadron of 200 members costs $350 a year and rewards members with 12 guaranteed bottles (many exclusive to members only), as well as bonus glassware, first rights to purchase additional vintage bottles, and an invite to the bottle share to end all bottle shares. 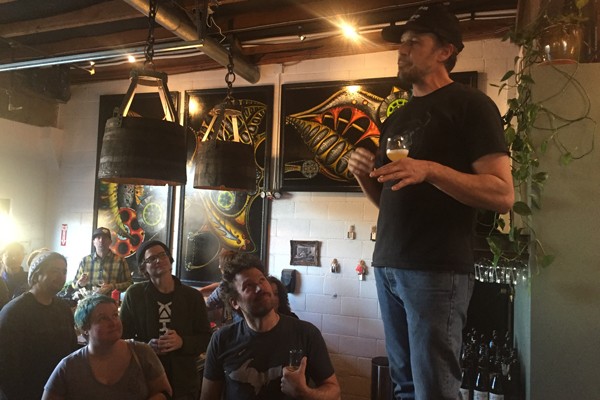 Paul Arney, founder of Ale Apothecary, began fielding Ale Club members just before formally opening for business in 2012. To say the least, he's had no problem filling up the membership since. "People from all around the country are members," Arney said, "but a surprising amount of them are people local to Bend who joined the Ale Club when we first started and have stayed faithful to it ever since. It's really not an exaggeration to say that I couldn't have gotten this off the ground without that kind of support from the beginning."

Such bottle clubs are a somewhat common sight for breweries like Arney's—places that specialize in bottle aging, vintage blending and other beer styles that take far more time and effort to make than the casual IPA down the street. It allows members to feel a bit like a Renaissance-style patron of the arts, sustaining startup breweries as they wield their art. De Garde Brewing offers a similar Keepers Membership that offers eight 750ml bottles, including four exclusive to members, as well as a tasting and tour at their facility in Tillamook. Places as large as southern California's The Bruery—and as small as Seattle's Floodland Brewing, which sold out of memberships in 45 minutes back in August—have also taken the approach.

It also results in some pretty good beer. The Ale Apothecary's box for this year includes selections including Marionberry Ghost (a blend of assorted ales aged in a rye whiskey barrel), Bottleworks 18th Anniversary (Arney's standard La Tache wild ale aged in mezcal barrels), and Red Echo, a non-carbonated wheat wine. Some will be available for sampling at their tasting room—including the latest version of Be Still, a dark sour with cascara and cocoa nibs—but anyone who wants to try the rarer stuff had either be a member, or befriend one quickly.