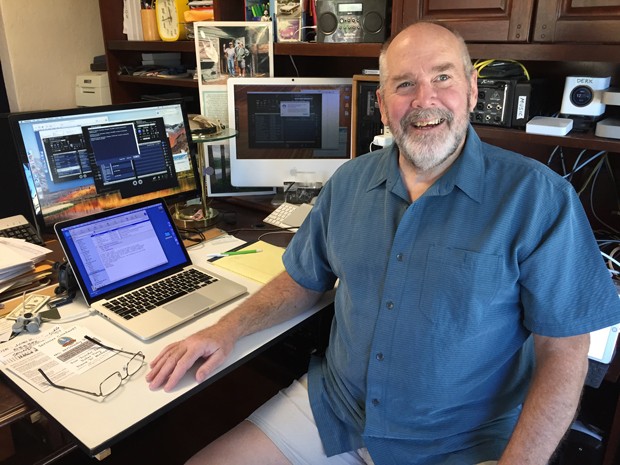 Central Oregon radio can already go from straight-down-the-middle mainstream to alternative rock to community-flavored talk in the push of a button. Now you can add yet another station, where a half-hour might yield such diverse artists as Merle Haggard, Billie Holiday and Cream.

And a whole lot more in between.

"The playlist that I developed was a mix of country stuff the cowboys would like, mixed in with stuff the hippies—or people on the other end of the social spectrum would like," says Jeff Cotton, director of the nonprofit Open Sky Radio, which owns and operates the new 96.5 KJIV-FM. "It's sort of an invented common denominator that I came up with."

You might call it eclectic, but Cotton goes one step further—labeling his "Jive Radio" format "schizoclectic." Its roots go way back to a famous, but now-defunct station in Gilroy, Calif. "Jive programming is genetically linked to the original and now legendary KFAT-FM, a station in the late '70s and early '80s that singlehandedly corralled (and some say invented) the term 'Americana,' a wide-ranging sub-genre of pop music," says Cotton.

"They did everything from Hank Williams, Sr., Willie Nelson, The Outlaws, the Allman Brothers and the Dead." As for "Jive Radio," Cotton personally selects each song. "I have curated the 'main list' (about 8,000 ever-changing songs) over the last 10 years. Every song is in there for a reason."

Cotton, who lives in Northern California, certainly knows his tunes. He started working on concert stages back in 1976. Initially, he was a touring sound engineer out of San Francisco before moving to the Reno/Lake Tahoe area where he promoted and produced concert events for nearly three decades. He entered the radio business in 2007 and planted his first "Jive" station in Cedarville, Calif., a year later.

Today, this same music mix has landed on OSR's seven stations, mostly in Oregon, California and Nevada. (It also streams on a half dozen others through syndication as well as jiveradio.org.) While KJIV's licensed to Madras, there's no physical studio there at the moment. "The whole premise now is to keep the overhead extremely low," says Cotton, "which is just the [transmitter] rent, royalty checks and things like that."

Cotton has enlisted the help of three veteran DJs to produce their own shows for his stations, but he doesn't rule out the possibility of locally produced shows in the future. "When ready, we'll be looking at producers who get our theme and can add their own take on inclusiveness," he says. "One of our first moves into localism will be to produce real-time, live concert broadcast events from local venues. That will take some time to develop, but I am already reaching out to key venue owners to enlist their cooperation."

Central Oregon wound up as the latest stop on Cotton's "Jive" journey for a couple of reasons—one of which was logistical: There was a station and license available. But more than that, "We saw it as a way to expand the 'Jive' footprint into Central Oregon, a market I view as similar in many ways to Reno/Tahoe, but with a far more progressive cultural attitude," he says. "I have many good friends in the area and have been visiting regularly since the mid-'70s. I know the radio dial in the market and feel there is a musical void we can fill."

Speaking of that "dial," there's a case to be made in 2018 to skip terrestrial radio altogether in favor of an Internet-only model. But Cotton, ever the radio veteran, disagrees. "Just because a technology seems old to the user doesn't make it invalid. Think toasters. People still use the appliance because it still does its job."

Cotton's determined to make it work over the long haul. Where does he see radio five years from now? That's simple, he says.

Mose Allison – "You Call It Joggin'"