Both parties have made their closing arguments, and the jury is considering whether to convict Ian Cranston of charges as severe as second-degree murder

Both defense and prosecutors in the case against accused killer Ian Cranston rested their case Tuesday, Nov. 15, ending with an intense rebuttal from prosecutor Michael Swart. The prosecutor revealed what appears to be video of Ian Cranston taking a drag off his cigarette seconds after shooting Barry Washington, before rendering medical aid.

"Clint Eastwood couldn't have been prouder," Swart told jurors. "Why is that so important? Because it goes to the reasonableness of his actions, it goes to whether he perceived the threat that [the defense] is suggesting that [Cranston] was. This guy was as cool, as calm, as calculated as could be." 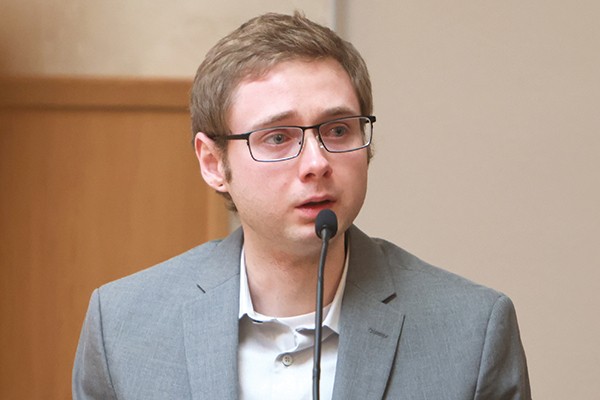 Cranston spoke publicly about the shooting for the first time last week as one of only two witnesses called by the defense. During cross-examination, Cranston's defense attorney Kevin Sali highlighted the injuries Cranston sustained, Cranston's supposed inability to defend himself against Washington without a firearm, what Cranston perceived as threatening and his actions immediately following the shooting. Prosecutors questioned Cranston's decision to bring a concealed firearm while drinking at bars, how he contributed to the argument, other options Cranston could've taken and inconsistencies in the timeline Cranston and others gave at different times.

Cranston alleged that on Sept. 19. 2021, he was smoking outside of The Capitol in downtown Bend when Washington approached the group and called his fiancee beautiful. Cranston said he was initially polite in tone when asking Washington to move along. Cranston said Butler rebuffed Washington, who continued talking to her, and that Cranston intervened after sensing her discomfort.

The argument escalated and Cranston alleges Washington said he was from California and made hand gestures he interpreted as gang signs, before Cranston said, "I don't care about your gang, get the f*** away from me." Shortly afterward, Washington punched Cranston, who said Washington started shouting "Cali Crips" repeatedly. Prosecutors and Washington's family deny that Washington was in a gang.

After being punched Cranston stumbled backward onto a wall and produced his firearm from a holster in the small of his back. He said he didn't plan on using the weapon but wanted to be prepared to do so. He said he hoped it'd deter Washington, but claims Washington saw the gun and continued acting aggressively.

"Clint Eastwood couldn't have been prouder," Swart told jurors. "Why is that so important? Because it goes to the reasonableness of his actions, it goes to whether he perceived the threat that [the defense] is suggesting that [Cranston] was. This guy was as cool, as calm, as calculated as could be." tweet this

"In this moment, as this is happening you raise your firearm, do you believe he sees your firearm when you raise it?" Sali asked.

"Yes absolutely," Cranston responded. "He was making eye contact with me; when I lifted the firearm he looked down at the firearm."

Cranston later claimed that Washington became more aggressive after seeing the firearm. Cranston fired the shot after Washington pushed Butler and hit Cranston's friend Tyler Smith in the nose. Cranston claims Washington turned toward him with a raised fist prior to shooting, a claim that prosecutors deny has any evidence. Cranston said he fired the shot and asked Washington if he was hit.

"He stopped dead in his tracks, and then he fell to the ground. As he was falling to the ground, I'd asked him if I hit him. I asked him that because he was so close to me that it was kind of a blind shoot situation. I didn't have an opportunity to use my sights. When he fell on the ground it was obvious. When I walked over to him, I asked him again. He responded, 'Don't kill me, bro.' And I said, 'I'm not going to kill you,'" Cranston said while tearing up.

Prosecutors began questioning by asking about the guns Cranston owns and his practice of carrying a concealed weapon. Prosecutors scrutinized Cranston's carrying of a firearm while drinking, something that's discouraged during concealed-carry training courses. Cranston's blood-alcohol level was measured at .04% after drinking two rum and Cokes, two beers and a sip of a mixed drink over five hours.

"Do you agree it would've been the responsible thing for you to do, to have left your handgun at home?" Prosecutor Swart asked Cranston, who responded he felt he was being responsible with his firearm.

Prosecutors also questioned how he may have intensified the argument, asking about the number of times he and his group used profanity, if he could've left during the argument and if he could've made it known that he was armed. Swart questioned what Cranston's first reaction was, suggesting running, calling for help or calling 911.

"In fact, your first reaction was to immediately reach around your back to the small of your back and take out your handgun," Swart asked.

Prosecutors also asked about inconsistencies in stories. Tyler Smith reported Cranston used profanity around 20 times rather than the few Cranston reported and Cranston's contact with EMS professionals at times doesn't align with symptoms he reported throughout the incident. The prosecution's final question to Cranston was about the timeline he gave his father from jail.

"I didn't, no. I didn't think it was 30 seconds; it felt a lot faster that," Cranston replied.

During closing arguments Swart cast doubt on the testimony of Cranston, Butler and Smith, alleging their statements are either exaggerated or full-on lies in order to protect Cranston. The prosecutors have repeatedly argued that Cranston fired a shot due to his pride being wounded, and said Cranston's fiancee and friend are now covering for his pride.

"At the beginning of this trial we talked about the seven deadly sins and we told you that pride is the worse of the seven deadly sins because it leads to all the other sins," Swart said. "Well guess what? Mr. Cranston's sins led to a lot of other sins that happened in front of this court. It led to Allison Butler coming in here lying. It led to Tyler Smith coming into court and not being honest, shading his testimony. It led to Mr. Cranston coming in here and not telling you the truth. And then it led to the defense coming in here perpetuating frauds upon you with their video."

Earlier in the trial the prosecution sowed doubt that the defense's videos of the altercation, which highlights individuals to make them clearer on poor quality surveillance cameras, didn't adjust their framerates correctly, which could lead to altered images. The defense argued that their cut of the footage didn't meaningfully change what the video showed.

During the defense's closing arguments, it criticized the state for focusing on the injuries Cranston received rather than the potential for greater injury if the attack continued.

"The dispute has been over whether the first two shots in fact resulted in a fracture in Ian Cranston's skull. I ask you to remember, that is not the relevant question," defense attorney Sali told jurors. "The use of defensive force is not directed at the injuries already been suffered, but at the injuries that are feared to come next."

Sali argued a person faced with a threat of harm can use the force he reasonably believes is necessary to avoid the threat. He said the alternative prosecutors offered to Cranston, like calling the police or teaming up to fight Washington, had little chance of succeeding, but didn't address the suggestion of retreating. Cranston's consumption of alcohol was also dismissed by Sali, who noted no witness indicated Cranston seemed impaired and that his blood alcohol content was about half the legal limit for driving. Lastly he addressed the 30 seconds between the punches being thrown and the shooting, saying Cranston hoped not to fire.

"It's a shot he never wanted to have to fired, to get out of a situation that he never wanted to be in, but I will repeat one more time what I said at the very beginning of this trial, it was a shot that the law absolutely gave him the right to fire," Sali said.

After Sali's closing statements prosecutors had a chance to rebut, and revealed video of what appears to be Cranston puffing on his cigarette after shooting Washington and before putting pressure on his wounds. Prosecutors allege this cuts against the idea that Cranston was seriously injured by the first two punches, that shooting was not proportional to the danger he was in and that he feared he would suffer great bodily harm.

Closing statements ended around 2 pm on Tuesday and jurors will now deliberate and attempt to decide on a verdict. Ten of 12 jurors must agree on a guilty or not guilty verdict for a decision to be final. Jury deliberations in murder trials can last several days.