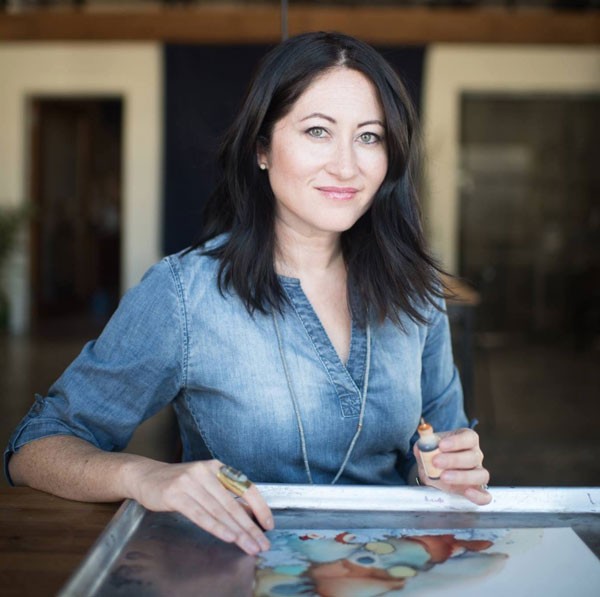 Karen Ruane never had a knack for watercolors, which is why her art may surprise you. It's not watercolors that she works with. Instead, she uses alcohol inks, which leave you with the same feeling: free and light.

Ruane grew up in the desert and has a deep love for it. She and her family found their way to Bend in 2014. Shortly before her move, she began exploring her interest in painting again, specifically marbling. By the time she got to Bend, she was marbling full time. "Every time you pivot, it informs your other work. I think it helps with everything you do and keeps everything fresh," Ruane says.

Recently, Ruane has found her main success selling on Instagram, which she says is the best way for an artist to sell their work. She's now joined up with seven other artists to start an Instagram-based grant for emerging female American artists. Launched in January, Ruane and the other seven artists each post their own work for sale and give 50 percent of the sale proceeds to the grant. When they reach $500, they announce a recipient for the money. The group helps by not just providing funds, but also by sharing the recipient's work via Instagram—with the hope of boosting exposure for the emerging artist.

Ruane is working on opening her own studio upstairs from Townshend's Bend Teahouse, where she'll host an open studio during First Friday in April and hopefully be able to showcase other artists' work. She's also working on a new mixed media series that explores grief. Having lost her father recently, Ruane says she's learned so much from the grieving process that it has given her clarity on finding beauty in the grief. While her work will continue to be largely abstract, she's still toying with the idea of bringing some elements of figures back in her work.

Open for First Friday in April!

Showing at The Bend Store through March