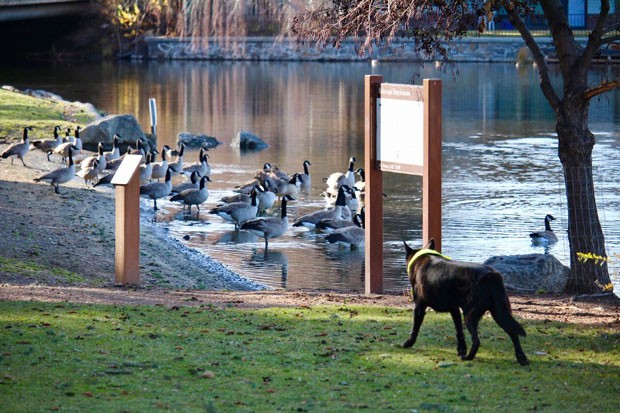 As recently as 10 years ago, Bend parks were being overrun by Canada geese. The birds pluck out lawns, erode riverbanks, soil the ground—and can scare off visitors.

Hazing, or using specially-trained canines to discourage geese from settling in the parks, is one part of the multi-faceted program BPRD has adopted, with remarkable success. The dogs keep the goose population down, allowing staff to avoid euthanization. Anyone with a well-trained canine—one that responds well to commands and is easily controlled—can apply for off-leash hazing.

"It's not OK to feed the geese," Amaral emphasizes. "It's harmful to the birds, it contributes to pollution, and it's against Bend Parks' and city ordinances."

Much of Bend's river bank area is lined with strips of native vegetation, eliminating the easy access of grass- or soil-lined shores. "We see the most goose activity in places where they can just walk right up the bank and access the grass by foot. At Drake Park and other areas there is grass right up to the river, really attractive to the geese, whereas at Riverbend or Farewell Bend Park, McKay, Miller's Landing – they all have a strip of native vegetation," Amaral says.

Coating nest eggs with corn oil prevents oxygen exchange through the shell and thereby inhibits growth. Amaral points out that the practice is encouraged by the Humane Society of the United States as a responsible alternative to removing the eggs or having to euthanize developed birds. "To me, if the Humane Society supports it, that really says something. Some people ask, why don't you just remove them? If you do that, the female will just re-nest somewhere else. With oiling, the female continues to incubate it until she realizes it's not a viable nest. By that time her physiology is changed and it's too late for her to re-nest."

Amaral says the district has tried a lot of things and ultimately found that a combination of methods gets the best results. "We use multiple techniques and vary the techniques, so the birds don't get used to it. It takes a lot of persistence." Park employees have even used paintball markers to chase the birds off the water. "Of course, we're not trying to hit the birds. Just the sound and the pellets landing in the water, that splash, does a great job to get those birds to fly."

After nesting season, around mid-May each year, any goose pairs with goslings that have hatched in the parks are rounded up, banded and relocated. "We band and release the adults right on site, then we band the juveniles and relocate them to the Summer Lake Wildlife Area, south of La Pine. They can tie in with the non-resident geese that are out there, and sometimes they adopt that more migrating behavior." Resident geese—those so accustomed to urban life that they nest not only in the parks, but within feet of Highway 97 and in downtown buildings—won't ever learn to migrate, Amaral says. However, banding has resulted in findings that the juveniles, or goslings, do sometimes adopt migrating behaviors when placed among the migrating flocks.


Volunteers Mia MacCollin and her husband Dan Ballin have been hazing geese in Bend parks since 2013, with their black lab mix Boston and Golden Retriever Miller. Callie, their seven-year-old French Brittany rescue, joined the team just over a year ago. 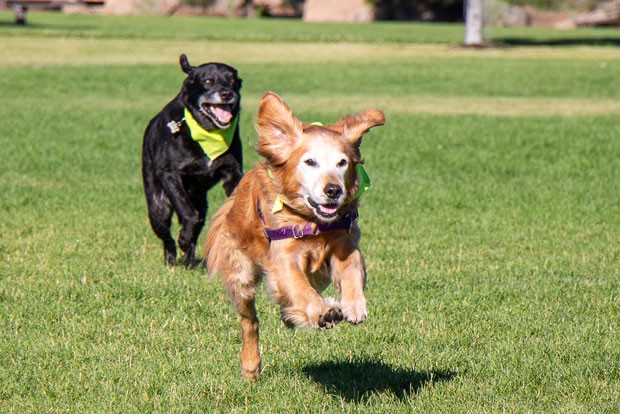 But she is the one that actually knows how to haze geese. She stares them down and circles them and gets them all gone," MacCollin said. Boston and Miller, on the other hand, were specifically trained not to chase birds. "I had especially trained Miller not to chase birds because he was going to be a service dog. I trained both of them and to this day they won't chase the geese. So I throw a ball and they will run and the geese will scatter."

The volunteer canines are identifiable by their yellow BPRD bandanas. Part of the volunteer training is learning how to respond when someone approaches, thinking the dog owner is just ignoring the leash law. "I tell volunteers whatever you're comfortable saying is fine. If you want to tell them about the program that's great, but it's not your responsibility. Just hand them my card," Amaral says.

Amaral directs potential volunteers to the BPRD website where they can fill out a volunteer application. From there, he walks them through a Power Point presentation about the program. If they're still interested he sets up a session with a professional trainer. "If they pass they get a vest and a bandana for the dog. They also get business cards to hand out in case anyone has questions or is interested in volunteering."

Volunteers choose their own schedules and work at whichever parks are convenient for them. "We used to schedule things, but now I'm just happy they're in the parks helping us. Whenever you can, as much as you can, that's great. Some of our volunteers are only out in the field once a week or less, some people are out there almost every day. There's probably some volunteer out there pretty much every day hazing birds. It's fantastic."

Latest in Dog Days of Summer

More in Dog Days of Summer