Students around the globe have been inspired into action by the courage of 17-year-old Greta Thunberg, a Swedish climate activist who was named Time's "Person of the Year" in 2019.

Two years ago, Thunberg began walking out of school, spending the days in protest outside the Swedish Parliament to demand stronger climate action from political leaders. Other students joined her, and the movement spread to other cities, and then to other countries. By 2019, two global student protests brought out 1 million students each. Youth activists in Bend also organized demonstrations.

Students from three local high schools gave the Source the run-down on what it was like to organize their own climate strikes last September and how it has inspired other environmentally conscious actions in the community.

The Bend City Council chose Andrew Skidmore, 15, of Summit High School to serve on the Climate Action Steering Committee beginning in 2018 to develop the Community Climate Action Plan. The plan—passed by the City Council in 2019—details a set of mostly voluntary strategies and actions to reduce local fossil fuel emissions.

“I believe it was the business interest of the real estate community that prevented the HES from becoming law. I don’t like that a business interest can override the will of the people.”—Andrew Skidmore tweet this

"Being on the Climate Action Steering Committee was a lot of new responsibility," said Skidmore, who attended meetings at City Hall for 14 months. "It helped me grow as a person. The fact that all the work we put in was going to a really important cause made me want to do it. It will really help Bend as a city, and create a lot of new opportunity."

Skidmore said he thought one of the most significant parts of CCAP was the Home Energy Score, which would have required homesellers to get an energy audit and publish this information for interested buyers.

"Personally, I would have liked to see it as a mandatory action," Skidmore said. "I believe it was the business interests of the real estate community that prevented the HES from becoming law. I don't like that a business interest can override the will of the people."

Redmond Proficiency Academy student Freddy Finney-Jordet said he also worked hard last year to lobby the Bend City Council to pass the CCAP. He was the previous director of the Oregon Youth Climate Strike and he's had conversations with mayors and city leaders throughout the state to talk about Bend's progress. He helped organize both the March 15 and Sept. 20 strikes in downtown Bend last year, and hopes 2020 will be even bigger.

"CCAP really brought more attention to the climate strikes, but there are no actual required measures in it. Some people didn't want to be required by the government to take these steps," he said. "But now there are huge fires in California, more massive fires in Australia; it's ravaging the landscape and killing animals and people. This movement is about rising up and demanding government action."

Kira Gilbert, 17, is a junior at Bend Senior High School and a leader in the youth climate movement. She's co-president of her school's Environmental Club and helped organize a student walkout Sept. 27. On that day, 150 students left class 45 minutes early to march to downtown Bend and join other student activists. 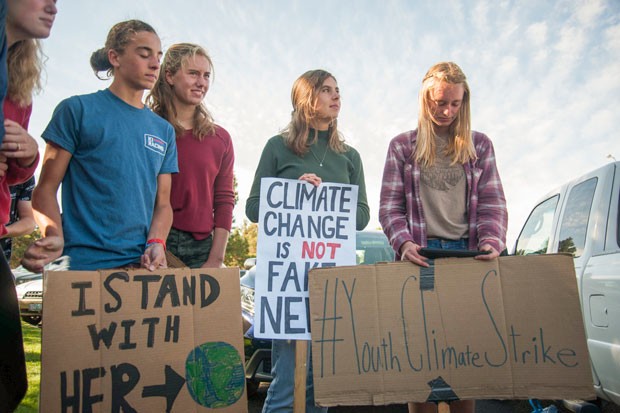 Gilbert also helped organize students in writing 200 postcards to Oregon representatives in Washington, D.C., as well as a stack addressed to Sen. Tim Knopp (R-Bend). Gilbert said the students were "pretty upset" last year when Knopp walked out of the Oregon State Senate to protest HB 2020, which would have put a cap on the state's greenhouse gas emissions. The bill failed, but a new cap-and-trade proposal is on the table for 2020, which includes a number of changes to assuage conservative critics in the manufacturing and utility sectors.

"The postcards for Knopp are going to be hand delivered when we have time," Gilbert said.

Gilbert and the rest of the Environmental Club at BSHS are planning a youth climate summit in March at the High Desert Museum, which Gilbert believes will be a good opportunity to network with other students.

"It's fair to say that it's not a super well-coordinated or cohesive movement locally, but when it comes down to it, we do manage to pull it off and unite everyone."

(This story was updated January 24, 2020. The original version had Kira Gilbert's name spelled "Kara." The Source regrets the error.)